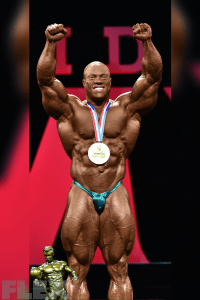 Let’s go back to the early days of August 2005. Baby-faced, 25-year-old Phil Heath just rocked the bodybuilding world by winning his first pro qualifier, the NPC USA Championships, when he first walked into Gold’s Gym Venice. It was his first visit to the mecca of bodybuilding, and he was still a bit starry-eyed despite his own rapid rise to stardom. On that fateful day, the greatest legend at Gold’s—a man who was second (for a heart- breaking sixth consecutive time) in that year’s Arnold Classic—gave the Gift a brush-off “What’s up?” It was the equivalent of Michael Jordan being frozen out in his rookie All-Star Game. The legends weren’t yet willing to welcome the upstart into their midst. Pro status and positive press weren’t enough. He’d have to earn it—on stages and, before then, in gyms.

Sixty pounds—that’s the difference between the 215-pound, version 1.0 Gift who strode into Gold’s Venice in 2005 and the 275-pound, version 4.0—the three-time Mr. Olympia. His astonishing muscular additions are evident everywhere, but the most valuable changes occurred to his shoulders. The one thing Phil Heath was not gifted with was wide clavicles, and in his initial years on pro stages many contended his lack of shoulder width would doom him to defeats against broad-boned bodybuilders Jay Cutler, Victor Martinez, and (Heath’s fellow IFBB Pro League rookie in ’06) Dennis Wolf.

But Heath had a plan. He couldn’t lengthen his clavicles, but he could add muscle to the ends of them. By dramatically expanding his deltoids, he widened his shoulders to the extent that few still spoke about his “narrowness” by the time he held the Sandow aloft at the 2011 Olympia. “When I became pro, I was only two years into bodybuilding, so everyone was able to see every flaw that I had, structurally or what not,” Heath says. “Eventually, everyone has been able to see the progression. Every year, someone has said, ‘He’s not wide enough,’ or whatever, and I’ve been able to shut them up just by training hard. I just stayed positive and maintained my focus. I don’t really go by what other people say. I just go by the pictures of the previous contest and ask myself a simple question: Can I be better? And the answer is always yes.”

"The Gift" already looks huge and shredded about 13 weeks out.

Getting My 'Phil' of the 7-time Mr. Olympia Champion

Phil Heath on Olympia Return: 'I Have Unfinished Business'

Muscle & Fitness caught up with Heath moments after his big announcement.

The Gift's strategy for winning in bodybuilding – and life.

The reigning and 7X Mr. O opens up about his double hernia operation less than a week after the Olympia.

Following a 7th Mr. Olympia victory, Phil Heath put his win in historical perspective as only he can.

Behind the scenes with the champ!