The following is an article from the March, 2006 issue of FLEX Magazine

Big, ripped and ready for the pro ranks, Dennis Wolf is hungry for success in the U.S. after a dominant with at the 2005 World Championships

Dear members, As Dennis Wolf won the World Championships, we got the information on short notice that there will be a professional photo shoot with FLEX magazine today. Because of that, the gym will be closed today from 3 PM to 7 PM. We ask for your understanding. – Fun Factory Team, Recklinghausen 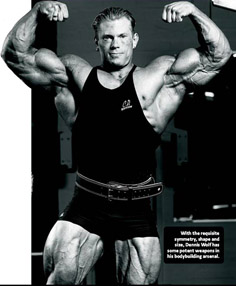 Such is the rock-star treatment bestowed upon newly minted IFBB pro Dennis Wolf in Germany. Considering that the country has given us the likes of GÃ¼nter Schlierkamp, Markus RÃ¼hl and Ronny Rockel, it’s not surprising that the locals take bodybuilding Ã¼ber seriously. So seriously that members wouldn’t blink an eye when they arrived at the gym for a workout and encountered that handwritten sign posted on the door.

Of course,FLEX didn’t request a closed shoot, but it was nice nonetheless. For Wolf, a polite wellgrounded man, who just happens to be 247 pounds of shredded grade-A bodybuilding beef, it was red-carpet treatment he certainly didn’t ask for. Nor did he expect what happened at a shoot the following day, where the owner of that gym made a trip to the bakery to have cakes and biscuits on hand for the World Amateur Bodybuilding Championships heavyweight and overall titlist. Ah, it’s good to be king, if just for a couple of days. 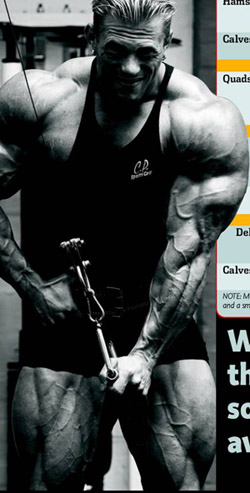 Wolf shouldn’t expect such hospitable conduct when he hits his first professional event, which will be in 2006 according to his current plans. Oh, sure, some of his fellow competitors will be pleasant, spotlights flip on and the warm-up suits come off, though, it’ll be game faces all around. Because Wolf, with his impressive size, structure, balance and conditioning, including massive legs, wide and thick shoulders and a streamlined waist, will be more than ready to take someone’s paycheck away from him.

Wolf’s story begins in the former USSR, where, in 1978, he was born to a poor but stable family in the industrial city of Tokmak (now in the republic of Kyrgyzstan). His dad was a laborer who eked out a living under Communist rule, and his mom was a housewife. A few years later, they had a second son – a third would come in 1996 – and for Wolf, days were filled with the typical commotion of school, chores and friends. Bodybuilding was not yet even a glimmer in the back of his imagination, although he did pursue other sports. “I played basketball for a few years,” he recalls. “I think I was good.”

In 1992, in the aftermath of the breakup of the once seemingly impenetrable Soviet Union, it was time for a change for Wolf’s family. They moved to Germany, his mother’s home country, and settled in a town called Marl. “I needed to learn German, and I did that quickly,” Wolf says. “In school, I did well, but [looking back] I could have been much better. I also started doing some battle sports, like Thai boxing and kickboxing.”

After high school, Wolf went to work 9 to 5 as a painter. At 19, he finally came in contact with the tools that would shape his future: barbells and dumbbells. “I was an Arnold Schwarzenegger fan, and that was themotivation for me [to begin] bodybuilding,” he says. “The first time I competed was 1999.” That year, he came in second in the heavyweight class of the NRW (North Rhine-Westphalia) Newcomer Championships and fourth among heavyweights at the International NRW Championships, both held in Germany.

Wolf stuck with it and steadily made progress, growing from 202 pounds (his weight when he first stepped onstage) to a high of 279 in the offseason today. (When he began training at age 19, he was a scrawny 162 at a height of 5’9″.) In 2000, he successfully qualified for the International German Championships and took fourth as a heavyweight; four years later, he moved up to second in that contest; he finally won the heavyweight and overall titles in 2005. With his victory in November at the World Amateur Championships, his ascension into professional status was complete.

Wolf’s physique is amazingly complete as well. For a European without the benefits of the state-of-the-art gym facilities and training knowledge readily available in the United States, he has amassed the requisite size and shape to make an impression in the pro ranks. Unlike many of the top amateurs in the United States, who snag a pro card while in the lightheavy and heavyweight ranks and then have to undergo a furious bulking-up campaign before their pro debuts, Wolf – who would be a super heavyweight by U.S. standards (there is no super-heavyweight class in the World Championships) – is already rock-solid at a contest weight of nearly 250 pounds.

“My training philosophy is train as hard as you can, because the other competitors are training hard, too,” he states simply. “I always train intensely, pyramiding up the weights every set, and in the last four to five weeks before a contest, I increase my overall sets.” He splits his bodypart training over five days, hitting chest and triceps on Monday, biceps and hams on Tuesday, quads on Wednesday, back on Thursday and delts on Friday; he nails his calves four days a week as a workout finisher. Wolf is firmly dedicated to pro bodybuilding, having left his painting job behind two years ago, and he is fully intent on making a living in the sport. His wife, Katja, whom he married in 2003, works full-time to provide for the family, which also includes her daughter, Sabrina, from a previous marriage.

“I get a lot of support from my wife,” he says gratefully, as he now turns his eyes on conquering America. “I’ll compete at the Europa Super Show in Texas this year. I think it’s best that I make my name in the United States, because bodybuilding is very popular there.” He’s right – while most gym owners wouldn’t dream of closing down for a photo shoot, he will find plenty of fans on these shores, nonetheless. Whether Wolf can earn the respect of those fans depends on one thing – if he has the killer instinct to blow down the competition in the pro ranks. Come August 26 in Texas, we’ll find out. FLEX

An Updated Guide on Training Truths and Muscle Myths

The more fitness changes, the more most of it stays the same. Like these four rules.

Glutes To The Max: Developing A Full Round Butt

Build a fuller rounder butt and hamstrings with using these training tips.