Ever felt so lost between the sheets that you wish you had a map on how to please her? Researchers in Finland may have answered your prayers: A group of scientists asked 704 participants of both sexes to mark on full-body pictures the places they find titillating to be touched during sex and while masturbating. The data was then analyzed, and the team created a topographical map of erogenous zones, suddenly making diagrams and charts much more interesting than we remember them to be in math class. In the chart below you’ll see the zones ranked from most sensual (bright yellow) less-so-but-still-significantly sensual dark brown. (The nude-color means participants reported no sensual response at all.)

The twist? It turns out, you might not need that map after all. In results published in the Archives of Sexual Behavior, the researchers found the most common erogenous hotspots were focused around the genitals, breasts, mouth, buttocks, anus, thighs, and neck, with the rest of the body still ranking somewhere on the sensual scale. Basically, touch your girl anywhere and you’ll rev her up. 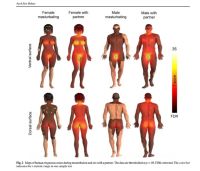 On her own, she’s not crazy about petting below the knees, but apparently with a partner’s touch, anywhere is a turnon. Researchers hypothesize that the majority of our bodies become an erogenous hotspot to encourage frequent reproduction. Whatever the reason, we’re rejoicing that no map is required for our arousing adventures.

For dudes in a dry spell, there’s even a masturbator’s edition to sensual hotspots. Not surprisingly, the landslide winner was brushing yourself right below the belt—although the nipples came in as a strong stimulating second place.

Find out how hitting the gym can improve your sexual performance.

A cure for the condition has finally come up.

9 Foods That Can Kill Your Sex Drive

Rid your fridge of these items that's causing your low libido.