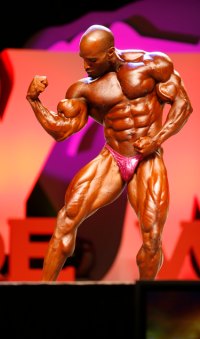 When you have a competition history like Darrem Charles — you are a legend.

Charles, a Trinidad native, began competing in 1989 taking the stage for the Trinidad Invitational Natural, where as a light-heavyweight he placed first and was awarded overall winner. By 1992 he had made his way to the IFBB Night of Champions and three years later took part in his first Arnold Classic.

Charles has said his more than two decades worth of bodybuilding accomplishments is the result of a recipe of diet, relying heavily on natural ingredients, and training.

6 Training Tenets for Longevity in Bodybuilding

The tenets that have propelled Darrem Charles to 13 pro wins over the past 25 years.

Darrem Charles before the 2013 Arnold Classic