We haven’t given Darrem Charles his due. In a year in which the biggest stories are Kevin Levrone’s comeback, Dexter Jackson’s longevity, and Phil Heath’s reign, consider this: Charles started his pro career back in 1992, as did Levrone, and he unretired in 2016 with his best competitive year. The 48-year-old has entered more pro contests than 46-year-old Jackson and is closing in on the record. And he’s won more pro shows than Heath. But Charles achieved his legend-worthy status with little fanfare—until now.

Born in 1968, Charles had racked up a slew of break dancing titles in his native Trinidad by age 17, when curiosity drew him into a weight room. He was 5'9" and a whopping 115, but his flesh responded rapidly to iron. Encouraged by friends, he entered and won a local bodybuilding show in 1986, and he took the teenage Trinidad and Tobago title at 154. Charles placed second in 1990 and 1991 in the light-heavy class of the World Championships but was too slight to make an impact in the IFBB Pro League in 1992. With his wife and young son, he moved to southern Florida in 1995, where he worked as a personal trainer. That same year, he returned to pro stages, hoping to make a name for himself.

The ’90s were bodybuilding’s second golden age, and Charles jostled to get noticed in talentladen lineups. Carving out his own niche, he was the perpetually peeled dude with the pointy biceps, zippered quads, and ice-cube abs. Showcasing his breakin’ background, he was also, arguably, the best poser in every show he entered. Never mind that he was competing at a slender 210, his strengths propelled him into posedowns, highlighted by a second in 1998 behind only Flex Wheeler. Still, 10 years into his Pro League career, he had zero wins. All the while, he had been slowly growing while remaining vigilant not to blur his lines.

His work paid off. Annually, he won at least one pro show for the seven years from 2002–2008. Partly, this was because the pro  lineups had retreated from the sky-high standards of the ’90s. But mostly it was because of Charles’ persistence. He competed in 37 contests over that span, winning nine, and though he never placed higher than seventh in the Olympia or sixth in the Arnold Classic, he weighed 225–230, and his posing excellence allowed him to maximize his strengths (arms, abs, conditioning) and minimize his weaknesses (back and leg size).

Thereafter, Charles’ career wound down. The man who had once entered nine shows in a year  did only one per year from 2011–13. You were as likely to see his son, Renel (winner of the 2013 Southern States lightweight class), onstage. At 44 he received a surprising invite to the 2013 Arnold Classic, where he again wowed the crowd with a scintillating routine; it seemed like his last dance. But with the announcement of the classic physique division and its emphasis on aesthetics and cuts, Charles  decided to return. In seven classic physique contests earlier this year, he won four and was second in three. Twenty-five years after his pro debut, the ageless Charles, with his distinctive physique, is again a common site on professional bodybuilding stages.

His is one of muscledom’s most remarkable careers, and what makes it so is how unlikely his enduring success has been. He was undersized. In fact, he was often the smallest guy in the top 10. What’s more, he doesn’t have a “classic physique,” despite his success in that division. He lacks an X-frame, and his development isn’t proportional or flowing. But he has made the most of what he has, he presents it masterfully, and he’s almost always high-def.

And he was persistent. Going into this year’s Olympia, Charles had entered 79 pro contests. Albert Beckles’ record is 82.  Because Charles collected some of his entries in masters or classic physique contests, you may be tempted to stamp an asterisk next to his name when he owns the record. Don’t. Against all odds, Prince Charles has been too good for too long. He’s earned our veneration. What follows are the tenets that bred his unlikely success.

If you thought he filled his workouts with light pumping, as if to gingerly chisel away at his sculptured flesh, think again. During the 2000s, he pyramided most of his sets, using progressively heavier weights for fewer reps. For example, his typical biceps routine, circa 2005, consisted of alternate dumbbell  curls, EZ-bar curls, and one-arm dumbbell preacher curls. All were done for four sets, which progressed from 12 reps to 10 to eight to six. This winner of both the New York Pro and Toronto Pro in 2005 was forever endeavoring to get more reps so he could increase the weights next workout.

Beyond the beginner stage, gains didn’t come easy for this Trinidadian, at least not when compared with Ronnie Coleman, Jay Cutler, and the other Goliaths he faced for two decades. He was tempted to eat himself to a much bigger off-season weight, but he resisted that lure. You won’t find any photos of a bulkedup (i.e., fat) 260-pound Charles. “That might work for some guys, but that wouldn’t work for me. My thing is bringing the cuts and the shape to the stage,” he says. “So bulking up just to be bigger would only make it harder for me to get into shape.” Throughout his long career, he has remained within 15 pounds of posing shape. As a result, even at 48, his waist is wispy, his abs are crisp, and he still delivers the details.

Science has proved the 8–12-rep range best for muscle growth, but going lower can boost strength and size. As we can see from his biceps workout, Charles liked the 6–12 range during his prime. For bigger body parts, like chest and back, he’d sometimes go as low as four reps on a pyramid’s apex set. When he did straight sets, he stayed mostly in the 6-10 range. Even when he was competing 50 pounds lighter than Markus Ruhl, he was working as hard, if not harder, than Ruhl to maximize his muscle.

THE ART OF THE POSE

“I’ve always seen bodybuilding as an art form and not just a static presentation of developed muscle. It’s about being able to display that muscle as beautifully as you can.” So says Charles, one of bodybuilding’s all-time greatest posers. Of course, he had that break dancing background, but Prince Charles has never relied on merely popping and locking.  Instead, he has continually explored diverse ways to present his hard-earned sinews as artfully as possible. “When I’m developing a routine, I’m brainstorming all the time,” he says. “Anything that I see could serve as inspiration.

“Some bodybuilders who come on the scene do routines that are built purely for audience reaction. People get carried away and talk about what a great routine it was, but if you dissect the performance you realize he wasn’t really hitting any poses or holding the shots correctly. Posing involves a lot more. You need proper alignment of your body, and it’s important how you flow  from one pose to the next. I put a lot of time and focus on those details so that I bring my best routine to the stage.”

“I like to cheat just enough so I can still execute the exercise correctly—that is, feel it in the muscle I’m trying to hit. Ultrastrict repetitions are what I call a Jane Fonda workout, which is using very light weight, so that nothing else moves,” Charles says. “In bodybuilding, you have to go a little bit heavier. Other muscles help lift the weight so you can apply extra stress to the  targeted muscle.” He cautions not to switch too much stress to other muscles. Focus on the targeted area and make sure it gets a full stretch and contraction, but don’t be afraid to use a bit of momentum to help you eke a few more reps. 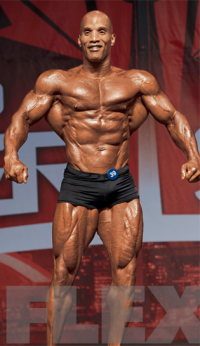 “Our sport doesn’t have to be about just brute strength and size. It can be something beautiful to look at, especially when it’s done to music. To the general public, our sport is often viewed as harsh and bland. I try to bring beauty to  it,” Charles said in 2005. He was classic physique before classic physique was cool—or, more accurately, after and before it was cool, because once upon a time every physique was classic. Then, with the growth market of the ’90s and ’00s, bodies ballooned. Now, in classic physique, Prince Charles has found a new home. “I’ve always looked bigger than my weight was,” he says. Forget the scales. The 48-year-old legend trains and diets to improve what he sees in the mirror. To him, bodybuilding is foremost an art form, and as a bodybuilder for life, he’ll never be finished with his work of art. – FLEX