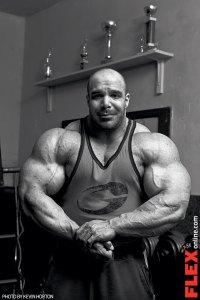 Zack “King” Khan started training at home after seeing guy’s like Arnold and Stallone. A year later, when he started training at a local gym he was urged to compete, but declined because he was doing it for himself. Eventually, the gym’s owner convinced Khan and enrolled him in his first competition…and he won!

“I enjoyed it so much that I’ve never looked back since,” Khan said. In 2000, Kahn placed fourth in the heavyweight division at the IFBB U.K. Championships. He would compete in this contest 8 more times (never finishing lower then fourth) before finally winning the super-heavyweight class, overall title, and IFBB Pro status in 2009.

While preparing for his pro debut in 2010, Khan destroyed his knee during a set of hack squats and it was not certain if he’d ever be back on stage.  Despite a series of setbacks, Khan made his pro debut in 2013, finishing seventh at the Europa Supershow.  With his proven resiliency and determination, you can bet he’ll be up there again and moving to the top.

310 pound Zack “King" Khan takes you through his favorite body part to train–chest!

Something Wicked This Way Comes

On the scene at the 2014 Arnold Sports Festival Expo with Zack "King" Khan!