THE YEAR OF THE OLYMPIA

Kenneth “Flex” Wheeler was born in Fresno, California, on August 23, 1965, about a month before the inaugural Mr. Olympia in New York City. At age 19, he won the light-heavyweight class at the 1985 AAU Teen Mr. America before switching to NPC events in order to graduate to the IFBB ranks. His overall record as a pro — winning half of his contests — assures his entry into the Hall of Fame in this, his first year of eligibility. Indeed, there are many who would argue that Wheeler should have won the event that began in the year of his birth. 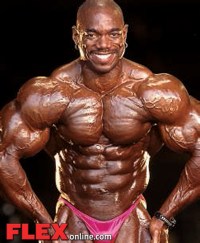 STRONG OUT OF THE GATE

From 1993 to 2003, Wheeler competed in 32 contests, including seven tries at the Olympia — with an average O placing of fourth.

DRIVING HIMSELF TOO HARD

After midnight on June 9, 1994, Wheeler’s car crashed on the I-10 Santa Monica Freeway in Los Angeles, California, resulting in injuries to two cervical vertebrae. He would miss the remainder of the 1994 season before resuming his competitive career in February 1995 with a victory at the Ironman Pro. 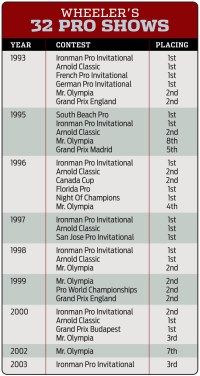 With an exterior considered by many to be the best ever onstage, the shocking news that Wheeler’s kidneys were in severe trouble prompted him to announce his retirement in 2000, while he awaited a transplant. In fact, he would return to compete in two more pro events: the 2002 Mr. Olympia, where he finished seventh, and his try for a sixth win at the Ironman, which landed him in third.

Wheeler’s contests took him to battlegrounds in eight countries outside of the United States and 17 cities around the world. To this day, he continues his involvement in the iron sport as a journalist and industry personality. – FLEX