IN 1965, GOLD’S GYM OPENED ITS DOORS AND LAUNCHED THE MODERN FITNESS MOVEMENT THAT BROUGHT EXERCISE AND HEALTHY LIVING INTO THE GLOBAL CONSCIENCE

Fifty years ago, in a single concrete room, 30 feet by 100 feet just of the Venice Beach shoreline, modern fitness was born. It was an unassuming spot, but packed inside were massive men pumping iron and curling, benching, and deadlifting thousands of pounds. This was the frst Gold’s Gym, and it would create a revolution that continues today.

Prior to 1965, American health was in decline. Less than a decade prior, President John F. Kennedy published an article titled “The Soft American” in Sports Illustrated, in which he argued that “such softness on the part of individual citizens can help to strip and destroy the vitality of a nation…the stamina and strength which the defense of liberty requires are not the product of a few weeks’ basic training or a month’s conditioning.” More than one-third of children in the U.S. had failed one of five strength tests administered in school, compared with a 1% failure rate for European students. The government was so concerned that it encouraged comic strips to address fitness. Peanuts creator Charles Schulz produced Snoopy’s Daily Dozen, a booklet featuring Snoopy, Charlie, Linus, and the gang going through a series of exercises. The small percentage of American adults who did exercise favored quick and easy workouts like 5BX, which stood for Five Basic Exercises and didn’t require additional equipment or do much to build strength. Real strength training was all but unknown.

A GYM IS BORN 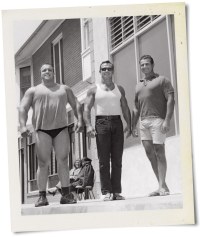 Enter Joe Gold. The merchant marine with an impressive physique who scored roles as an extra in films including The Ten Commandments and Around the World in 80 Days had an idea. He worked out at Muscle Beach just south of the Santa Monica Pier—where young men like the original “fitness superhero” Jack LaLanne and Steve Reeves, who played Hercules, lifted crude weights, performed feats of strength like handstands and other gymnastic moves, and showed off their hulking physiques to tourists moseying down the boardwalk. But Gold knew they needed an indoor spot so they could work out at all hours and train with better equipment. He purchased an abandoned lot on Pacific Avenue and erected a simple building out of cinder blocks, and thus Gold’s Gym was born.

“Joe was a hardcore trainer, a competitive bodybuilder back in the day,” FLEX Chief Content Director Shawn Perine says. “He was about building hardcore muscle, about giving guys the chance to create the ultimate physique.”

Gold saw an opportunity—at the time there were just three gyms for the 7 million people in the Los Angeles area—but he also understood how much he could improve the bodybuilding community. The weights and benches of the day were poorly made, uneven with faulty cables and uncomfortable grips. Gold knew what the lifters liked because, after all, he was one of them, and so he set about creating equipment to suit their needs. He turned his two-car garage into a machine shop of sorts, developing benches, pulley systems, unique handles, and other homemade

devices that were superior to anything on the market. “When you felt his dumbbells, there was a magic there,” remembers Eddie Giuliani, a bodybuilder from New York who moved to California to train at Gold’s Gym and would win his height class in Mr. America and Mr. World. 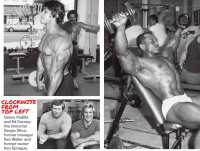 Bodybuilders flocked to Gold’s Gym. While other gyms tried to mimic the cutting-edge technology, none had the brilliance of Joe Gold. Dave Draper, who was known as the Blond Bomber, and who was literally and figuratively the biggest muscle star of the early 1960s, joined Gold’s along with the other top stars of the day. Tourists stood outside the gym, peering in with hopes of catching a glimpse of the men inside. People who couldn’t get to the beachside spot could still see Draper and others on the cover of bodybuilding magazines that were slowly taking off. “That was the ‘me’ generation, and all of a sudden people were discovering themselves, and what better way to discover yourself than to see how ripped you can make your muscles?” Perine says. Magazines like Muscle Builder featured interviews and tips from the big names at Gold’s, turning them into household names.

The rapid explosion of fitness and bodybuilding spurred the growth of scientific breakthroughs and interest from the medical field. The fledgling International Society of Sport Psychology held its first World Congress in 1965, and the North American Society for the Psychology of Sport and Physical Activity came into being in 1967. In 1971, State University of New York at Stony Brook chemistry professor Paul C. Lauterbur developed the concept that he would use to create the first magnetic resonance imaging (MRI) machine and the first issue of the Journal of Sports Medicine came off the presses a year later. 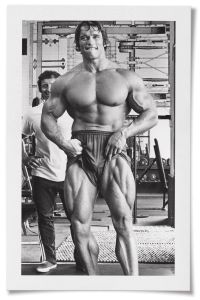 Then, of course, came Arnold. Joe Weider, creator of the Mr. Olympia competition and publisher of magazines like Muscle & Fitness and FLEX, brought Arnold Schwarzenegger to train at Gold’s Gym in 1968, and the Austrian almost immediately became an icon. He would work out with Draper, Giuliani, and his good friend and roommate, Franco Columbu, harder, faster, and longer than anyone else, smiling throughout the effort, impressing the young men who wanted to be him. “Arnold was everywhere,” his frequent training partner Ric Drasin says. “He made it the Mecca.”

Throughout the 1970s, the bodybuilding movement continued to gain traction, and Arnold’s gang led the way. Yellow Gold’s Gym T-shirts featuring the ubiquitous Gold’s Gym logo—designed by Drasin spontaneously on a cocktail napkin—were everywhere on the boardwalk, the beach, the bars around town, and beyond. To wear one was to signal that you were a part of something larger. Gold’s Gym hosted the 1977 Mr. America contest. That same year the movie Pumping Iron, featuring Schwarzenegger competing in the 1975 Mr. Universe and Mr. Olympia competitions, vaulted the bodybuilders to another level of celebrity. Soon Hollywood stars like Clint Eastwood were dropping in for sessions as well as sports stars like Muhammad Ali. Bodybuilding had solidified itself in mainstream culture. “I remember watching TV in the ’80s, and every other commercial had a bodybuilder,” Perine says. “More likely than not, that bodybuilder was recruited by somebody calling the front desk of Gold’s Gym Venice.”

By 1980, Gold’s Gym had been sold off by Gold and passed through a few owners, landing in the hands of Pete Grymkowski, Tim Kimber, and Ed Connors. The trio, nicknamed the Three Horseman, set about spreading the core message of the brand to the nation. They saw that bodybuilding and physical fitness had staying power, less of a trend and more of a basic fact of the aging baby boomer lifestyle. Consider that in 1982 movie star Jane Fonda would take a break from her busy schedule to shoot Jane Fonda’s Workout, launching her successful second career. Soon after in 1985 the American Council on Exercise was formed to create a standard national certification process for aerobic instructors. Fitness was no longer a tourist attraction on Venice Beach, it was a part of everyday American life. And Gold’s Gym became a cornerstone of pop culture. Carl Weathers, who played Apollo Creed in Rocky, wore a Gold’s Gym T-shirt on a Saturday Night Live promo spot; Wesley Snipes donned a Gold’s Gym tank top in White Men Can’t Jump; and Will Smith flashed a Gold’s Gym VIP pass in Men in Black. All types of celebrities from rock stars like Janet Jackson to Olympic gold medalists like Greg Louganis and—the most famous of all— basketball legend Michael Jordan were showing up at Gold’s Gym.

Connors opened the first licensed Gold’s Gym in San Francisco in 1980 and dedicated himself to launching new outposts. Jerry McCall, a nationally competitive bodybuilder who bought into the San Jose franchise in 1982, remembers the old days. “Ed really spawned the licensing program,” the former president of the Gold’s Gym Franchisee Association says. “He had a knack for meeting people, like somebody in Rochester or Madison, a hardcore kind of guy who had a small club and wanted to expand.” By 1981, there were 5,000 singular health clubs nationwide, and many entrepreneurs saw the great value in aligning their little gyms with Gold’s Gym, which was rapidly becoming the dominant force in American fitness.

The number of Gold’s Gyms across the country skyrocketed. The group took the brand international in 1985 when a branch opened in Canada. The iconic T-shirts started selling in retail outlets worldwide in 1987, the perfect complement to an increasing global focus on fitness, born at that unassuming gym in Venice. By 1993, Gold’s Gym had 1 million members, and that’s when it became clear that it wasn’t just bringing a fitness revolution, it was creating a legacy by helping hundreds of thousands of people realize their potential through fitness. In 1996 it expanded to Europe and Asia, changing perceptions across the globe. “When we first opened, the word fitness didn’t exist in the Russian language,” says Paul J. Kuebler, one of the three principal people to open the first Gold’s Gym in Moscow’s Leningrad Prospekt in 1996. “We had to explain to Russians what fitness was for. In the past, they only worked out to improve at the sports they played.”

A GYM GROWS UP

While Gold’s Gym became known as the Mecca of Bodybuilding, the brand also pioneered the latest fitness innovations, making sure their members, who came first just as they had when Joe Gold set about creating a gym for his peers, stayed at the forefront. Connors built a group exercise room in the San Jose gym in 1981, well before the trend took off nationally. The Gold’s Gym trainers got ideas from everywhere, increasing the use of kettlebells and periodization after seeing the success these exercises and philosophies had in Russia. The cardio age came into being in 1984 with the StairMaster StepMill, and Gold’s Gym locations nationwide featured the machines. Lori Lowell, the national group fitness director for Gold’s Gym International between 1999 and 2009, talked about how classes created the right atmosphere. “There’s a power in group fitness,” she says. “It wasn’t just about coming in and lifting weights. We were delivering a great social environment as well as a great workout.” The success is obvious, with gyms offering everything from yoga, Pilates, and core training to cardio kickboxing. Other classes like TRX and Zumba gained popularity in the coming decades and were quickly adopted by Gold’s Gym locations around the world. This past year, Gold’s Gym partnered with Microsoft to bring fitness into the next era by featuring its branded workouts on the Microsoft Band, the most cutting-edge smartband available.

The Gold’s Gym legacy has left its mark on America’s attitude toward fitness, even though at the beginning, it was never a guarantee. “More than 45 years ago we all together went on a crusade to fight for health and fitness for resistance training, bodybuilding, and weightlifting,” Schwarzenegger said at a recent celebration. “At that time, everyone laughed. Now 45 years later, there isn’t one hotel in the world that doesn’t have a fitness room. Our crusade has been extremely successful.” In the next 50 years, Gold’s Gym is poised to remain a leading force in the world of fitness. Joe Gold, his group of ambitious bodybuilders, and the stewards of the Gold’s Gym legacy who came in the half century after truly did create a modern revolution. – FLEX