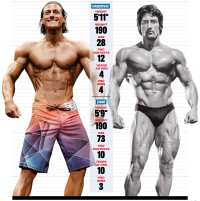 Frank Zane is the godfather of the men’s physique division. Most of the best bodybuilders of the ’70s emphasized quality over quantity. But even in that era, Zane, Mr. Olympia from 1977 to 1979, stood out as a paradigm of aesthetics. Size standards have progressed ever onward since then, especially regarding legs. The Frank Zane who was the best bodybuilder in the world 36 years ago would have difficulty winning an amateur bodybuilding title today. But put that same 37-year-old in the Olympia Men’s Physique Showdown and he could come out on top.

The men’s physique division was created to champion Zane-style bodies. With thighs beneath board shorts, the focus is on upper-body aesthetics: a slender waist with crisp abs, broad shoulders with capped delts, a classical ideal of attractiveness. With similar dimensions and a facial resemblance to the three-time Mr. O, Sadik Hadzovic, who won this year’s Arnold Classic men’s physique, is like a modern incarnation of the Zane paragon. If, in some time-travel plot, the bodybuilding legend of yesteryear squared off against the top-ranked physique pro of today, they’d be evenly matched—whether wearing board shorts or posing trunks.