More insight from one of bodybuilding’s all-time greats

In the March issue of FLEX we bring you an interview with bodybuilding legend Bill Pearl. Born on an Indian reservation in Oregon 78 years ago, Bill Pearl lived a fascinating life that lead him through a stint in the Navy, to an onstage meeting with Sean Connery, a traveling strongman act, into heated battle with the likes of Sergio Oliva and Reg Park and an near-miss showdown with Arnold Schwarzenegger. Along the way he became a lacto-ovo-vegetarian and was recognized as one of the greatest ever to don a pair of posing trunks. Today, at 78, Bill still trains daily, getting up before 4am to pound the weights, as he’s been doing for over 60 years now. 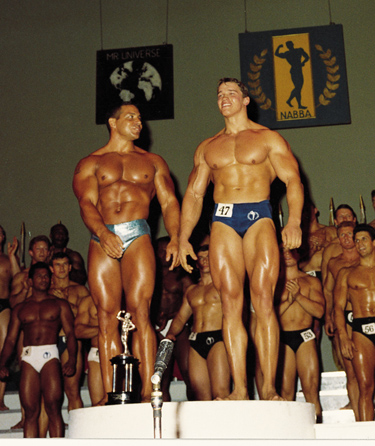 Below we’ve culled a few outtakes from our interview with Bill. Be sure to pick up a copy of the March issue of FLEX, on newsstands now, to read the full interview.

Bill on Mike and Ray Mentzer:
Mike Mentzer and his brother Ray would write me letters back when they were just kids growing up in Pennsylvania. I think Mike was only about 11 at the time and Ray was only 9 or 10, and I’d write them back. They’d send me photos of themselves and ask what they could do to build themselves up. Of course I could never have realized at the time what they would become. Both of them were truly genetic marvels with incredible strength and an ability to put on great amounts of size. Ray was especially strong. He did things I never saw anyone else doing.
For example, a few years before he passed he and I were in Germany and he was doing one-arm curls on a Nautilus biceps machine with 240 pounds. After Ray walked away I went over to give it a try and I could barely budge it, and that’s with two arms. Now I’m no weakling by any means, but I have never witnessed the kind of strength Ray showed on that day.

Bill on being a lacto-ovo-vegetarian:
I feel great. I’m sure a lot of people believe that you’ll find yourself low on energy as a vegetarian but the opposite is true. Since I’ve given up meat I’m healthier and I have more energy. Even my temperament is different. I was a bit of a rough and tumble sort back in the day, but since getting rid of meat from my diet much of that restlessness has gone away. What people also have trouble believing is that you can keep muscle on your bones without eating fish, fowl or red meat, but you can and I did. I competed in my last Mr. Universe, which I won, as a lacto-ovo-vegetarian.

On Arnold:
Arnold and I have always had a pretty good relationship. He’s a very interesting person. He’s obviously driven to succeed and sometimes that means doing things at the expense of others. If you’re aware of this when you deal with him you’ll be fine. If you’re a bit naive or unaware of the way he operates, you could find yourself on the short end of the stick. I learned a long time ago not to let people take advantage, so I’m fine with him.

Bill Pearl’s Strength
In his day Bill Pearl was one of the strongest bodybuilders around, both in traditional lifts and in various strength acts he would perform as part of his traveling strongman act. We’ve listed some of his legendary feats of strength below.

Get a Handle on Hormones on Women’s Health & Fitness Day

Inside the Incredible Growth of the Olympia

Take a sneak peek into bodybuilding's biggest event of the year and its continued success.

Every Rep Matters In this Deadlift Challenge

Rob Fletcher is showing the world the strength and power of his human spirit.

The legend passed away at the age of 91.