Every bodybuilder has at least one weak area. Roelly Winklaar says his chest is one of his. Perhaps he’s being modest. Photos of his side chest and most muscular poses suggest his pecs are doing just fine— heavily striated, thick from top to bottom, not overpowered by the 246-pounder’s enormous arms. But hey, if a guy says he needs to work on something, then maybe he does.

“I’M ALWAYS TRYING TO GET MY PECS BIGGER,”

he says. “I’d like them to be up to par with my best body parts, like arms and quads. A lot of bodybuilders don’t like training their weak areas. Not me. Working on my weaknesses means I’m improving. If you neglect your weaknesses, you’re getting worse because symmetry is so important in our sport, especially when you’re standing with the best on the Olympia stage.”

As you’ll see from Winklaar’s training split, he trains his chest twice a week on its own in a morning workout when he’s fresh. (He trains his shoulders later that day.) The late Joe Weider would have called this the “Priority Principle.” When you want to bring up a weak area, give it your full attention and make sure it’s not negatively affected by previous work on a tie-in muscle. “You have to be smart with how you schedule your training,” says Winklaar. “You have to think about how working certain muscle groups will affect others.”

The day before hitting his chest (Monday), Winklaar trains his legs. The day before that, he rests. The pecs are at full capacity come Tuesday, and they certainly need to be for the 20-set onslaught he puts his chest through. If this grueling gauntlet of presses, flyes, and pullovers doesn’t bring up Winklaar’s so-called weakness, nothing will.

Training note: “I don’t hold myself to certain rest periods between sets,” says Winklaar, “but I don’t rest very long. I would say I probably take 30 to 45 seconds between sets.” 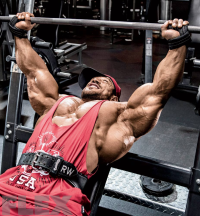 START: Lie back on an incline bench and grasp the bar with an overhand grip outside of shoulder width. Unrack the bar and start with it directly over your upper chest, arms extended.

WINKLAAR SAYS: “I go as heavy as possible on big exercises like incline presses. This is the best exercise for adding size.”

START: Adjust the seat of a machine press so the handles are in line with your lower chest in the down position. Keep your feet flat on the floor and your back and head against the pad.

EXECUTION: Press the weight until your elbows are extended but not locked out. Slowly lower the bar to the down position without letting the weight rest on the stack between each rep.

WINKLAAR SAYS: “This is another exercise I go heavy on. Because you’re using a machine, it’s a little bit safer than a barbell. You can really load up on weight without having to worry so much about injury.”

START: Adjust the seat of a chest flye machine so that the handles are at chest level. Sit on the seat with your back flat against the pad, grasp the handles, and begin with your arms straight out to the sides and your elbows slightly bent.

EXECUTION: Contract your pecs to bring your hands together. When your hands touch, squeeze your pecs hard for a count, then slowly return to the start position without letting the weight rest on the stack.

WINKLAAR SAYS: “The pecs are isolated from the triceps with machine flyes. It’s important on these single-joint exercises to concentrate on the target muscle to stimulate as many fibers as possible.” 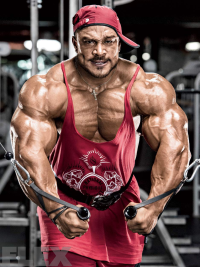 START: Set the pulleys on both sides of a cable station to above shoulder height and attach handles to them. Grab the handles, position yourself directly in the middle of the station and step forward a foot or two so that the weights aren’t resting on the stack. Begin with your arms extended out to your sides and your elbows slightly bent.

EXECUTION: Keeping only a slight bend in your elbows, contract your pecs to bring the handles together in a wide arc in front of your lower chest. Bring your hands together (or cross your hands over one another so your wrists touch to get a stronger contraction), then squeeze your pecs together hard for a count. Slowly return the handles to the start position.

WINKLAAR SAYS: “Focus on the inner pecs at the top of the rep to create separation between the pecs. Squeeze hard at the end.” 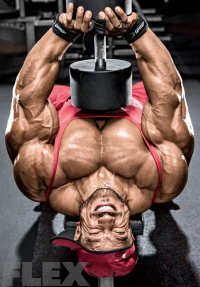 START: With your body perpendicular to a flat bench and holding a dumbbell with both hands, place the backs of your shoulders on the bench with your knees bent and feet flat on the floor in front of you. Drop your hips below the level of the bench, the dumbbell straight out over your chest with your arms straight.

EXECUTION: With your elbows slightly bent, lower the dumbbell back and behind your head until you feel a stretch in your pecs. Contract your pecs to return the dumbbell to the start position.

WINKLAAR SAYS: “Pullovers aren’t popular, but they are a good change of pace from presses and flyes.”

*Increase the weight each set.

**Stay with the same weight on all sets. 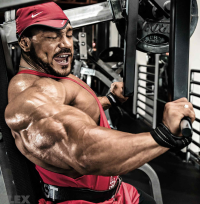