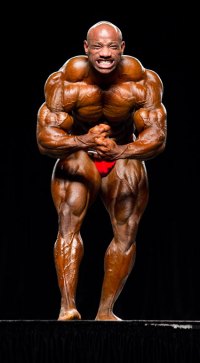 You know you’ve made it when a national qualifier NPC competition boasts your namesake — the Dexter Jackson Classic; an amateur bodybuilding, fitness, figure, bikini, and physique contest.

With more than two decades of bodybuilding accomplishments lining his shelves, it only made sense the legend would open the stage to the next generation of champions, in part mentoring their development.

Dexter ‘The Blade’ Jackson’s development began to take shape back in 1992 when he competed in his first NPC event, the Southern States Championship, where he took third place. He first competed professionally in the 1999 Arnold Classic, Night of Champions, and Mr. Olympia contests. Nearly a decade after his professional debut, Jackson made history in 2008 defeating the reigning two-time Mr. Olympia, Jay Cutler, and winning the Arnold Classic title all in the same year. He rounded out 2008 with wins at the Australian Pro Grand Prix VIII, New Zealand Grand Prix and Russian Grand Prix.

In 2012, with 20 years on the competition circuit, Jackson placed fourth in Mr. Olympia, and won that year’s Masters Olympia at the age of 43, placing him alongside Chris Dickerson as the only bodybuilders to win titles in both the Mr. Olympia and Masters Olympia. The following year Jackson won his fourth Arnold Classic.

Who Will Be the First Ever People's Champ?

YOU have the power to cast a vote to crown this year's Mr. O.

The Routine of 2018 Arnold Classic Runner Up, Dexter Jackson

What if Dexter Jackson and Vince Taylor dueled at 45?