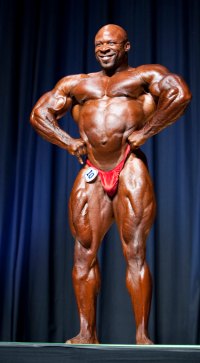 Marcus Haley found sports as a way out of what would have been a tough upbringing.

He spent his formative teen years growing up in foster homes. An outstanding running back and defensive back, Haley earned a scholarship to Dakota Weslayan University, but never completed his studies. Instead he turned his attention to the sport that had given him the most strength, physically and mentally — bodybuilding.

Haley, who had looked up to Shawn Ray and Mike Ashley as a kid, started training at Gold’s gym under the guidance of a local female bodybuilder named Gabby. His first show was the 1997 Golds Gym Classic in Las Vegas, where he placed third as a middleweight. He continued training and continued taking over the USA Bodybuilding/Figure Championships, finally placing first in the super heavyweight division in turn earning his IFBB pro card.

Marcus Haley before the 2013 Arnold Classic

Prepping 7 Athletes for the Arnold Weekend

DJ has been working with athletes from throughout the world. Here he is guiding 7 athletes into the 2013 Arnold Classic

Getting it done for the 2013 Arnold Classic

Training Mode is On: Haley and Freeman are working with Dennis James and will compete against each other at the Arnold