"WHEN I GO TO THE GYM, ITÂS NOT LIKE, "HEY, weÂre going to the waterslides!" IÂm going to the gym to get some type of a feeling, because I have only one or two hours in the day to do everything, and I gotta focus. Adorthus Cherry is talking to me on his cell phone from his air-conditioned car somewhere in Modesto, California, where itÂs hot with a chance of dust. HeÂs explaining how he approaches his workouts these days, perched as he is near the top of the amateur heavyweight ranks, one gut-wrenching step from becoming an IFBB pro. "IÂm not going to be a jerk to anyone, but after IÂm finished, then I can talk about the fun stuff. While IÂm there I have to make it count. I never used to sweat in the gym, and IÂd be in there for three hours. Now IÂm sweating and IÂm in there for only an hour and a half."

The three-hour marathon sessions marked AdorthusÂ first four years in amateur bodybuilding (1994Â1998), when he could win the small shows just by donning his posing trunks but could never consistently break the top 10 in the national shows against amateurs like Jay Cutler and Dexter Jackson. He worked hard in the gym, but something ate at him, a feeling that all wasnÂt well with his workouts. ÂI was all about the pretty back exercises," he says. "Pulldowns to the front. Pulldowns behind the neck. Close-grip pulldowns. And just maybe a row." At the time, he says, he just didnÂt realize how hard guys worked out and dieted. That would all change, of course, but not before he almost killed himself with alcohol, a battle that raged for several years, destroying his marriage and leaving his son hanging in the balance. Adorthus knew what it meant to be a fatherless child, and he refused to let his own son live that life. He chose sobriety, and in 2001 came back from his bodybuilding hiatus.

ACT II
Adorthus CherryÂs second coming is predicated on getting results and climbing out of obscurity, so when he made his decision to compete again, he went to veterans of the game for advice. Part of the vast training overhaul was the replacement of pulldowns with more rows, the exercises that build meaty back muscle.

Adorthus also started working out with a new crew, and he suffered the first few times in the gym. "The only thing that kept me going was that I had so much to prove to these guys. I just couldnÂt quit," he says. "We used to do one-arm seated rows on the Hammer Strength, then move to the T-bar row without the pad, where you had to stand and pick that weight up. I could barely pull three 45-pound plates. After my set I remember climbing over to the seat at the counter and sitting there with my head on the cold countertop and thinking, How many more sets are we gonna do?"

Six years later, Adorthus is still doing the rows, and he has the thick back necessary for the big time to show for it. When he turns around, he knows how he wants people to react. "I love to hear the cheering, but I donÂt want to win because IÂm the biggest and the toughest, or even the prettiest," he says. "I want to win because itÂs a look thatÂs appealing. I want guys to say, ÂMan, I want my back to look like that. I want it to be symmetrical and detailed and really bumpy. You can see the rhomboids, the rear delts and all the little nooks and crannies!Â I want to hear that type of stuff."

In July, at the NPC USA Championships in Las Vegas (which Adorthus was preparing for at press time), the odds are good that he did. He was third in the heavyweight division in 2006, and according to Adorthus and the critics, this year is his time, if ever there will be one. "IÂve learned to be humble, and itÂs hard to be humble and want to win," he says. "This is the first time anyone has had me as the front-runner, and I want to show people that I deserve it. I have the chance to show my son, too, that if you work hard and never give up, anything is possible." M&F

BACK BURNER
1. I donÂt use straps at the start of my workout. That way IÂm not only getting the forearm work but IÂm getting the muscles to do what theyÂre supposed to do Â the forearm and the biceps working in turn for the back. You never want your back to suffer because of grip strength.

2. I like the narrow grip on the seated row because it emphasizes the lower lats more; the wider grip hits the rhomboids more. I like the handle-bar grip on the T-bar row. With the bentover row, I use a natural grip, not too wide and not too narrow, and I pull toward the waist.

3. I use the front pulldown at the end of my routine, after IÂve exhausted my back with the other exercises, to work on width. I make sure to pull to between my chin and my chest and keep a really nice arch in my back.

4. Lifting heavy is important, but proper form is vital. Tighten your core when you row and maintain the arch in your lower back. Bring your elbows past the plane of your body and squeeze your shoulder blades together for maximum contraction of your upper lats, rhomboids and middle traps.

5. Unless youÂre a strongman or someone paid to push the limits, going ÂheavyÂ doesnÂt mean Âmoving as much weight as you can by any means possible.Â Bodybuilding is about shocking your muscles and learning what makes them respond, but you accomplish that through focus and proper form.

6. I always start with heavy rowing exercises such as the T-bar row. When IÂm fresh I can go very heavy, therefore stimulating more muscle fibers and influencing more muscle growth with one of the best basic back mass-builders there is. 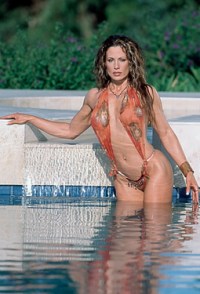 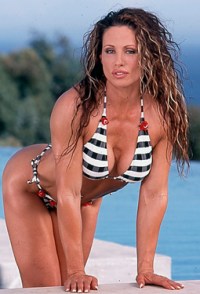 Take a look at the traits that made Arnold Schwarzenegger a huge success.

He might even be double Thor's size for the role.

There must have been some creatine in that old silk hat they found.