STIHL, a German chainsaw and power tools company, produces the Timbersports Series, an international lumberjack competition tour with collegiate and professional events. This year, STIHL brought its chainsaws and crosscut saws to Central Park for the U.S. Championships.

Prior to the championships, M&F attended a media preview, where we met athletes, the producer, and one M&F editor even sawed through a log with a crosscut saw.

The first athlete on our list was Cogar, the 28-year-old eventual champion from Diana, West Virginia whose been competing in lumberjack type events for 16 years. “Winning the U.S. Championships would be something special on my list but the main thing I’m going for is to represent the U.S. in Poland this year,” says Cogar. “I want to continue to get better at every event, especially the single buck.”

The STIHL Timbersports World Championship is November 13 in Poland, and it pits the world’s best lumberjack nations against each other. Training for events like the single buck (making one cut through 19 inches of white pine using a single man cross-cut saw) or the standing block chop (axing through 12-14 inches of white pine), requires full body strength, endurance and accuracy. Next up is lumberjack Chris Bradshaw, who stands 6’2”, weighs 315 pounds, bench presses 535 pounds, deadlifts 700 pounds, and squats 665 pounds.

“In our offseason I go to the gym 3-4 times a week, following Jim Wendle’s 5-3-1 program,” says Bradshaw. “I’ve been following it for more than five years now and even though I’ve been gym training less frequently the past two years, I’m able to maintain 90% of what my max efforts were two years ago.”

Bradshaw, like many of the STIHL athletes, has a full-time job as a log buyer for Allegheny Wood Products. Arden Cogar Jr., Matt Cogar’s cousin, is a civil defense attorney by day and a skilled axe-swinger by night. He’s been a driving force behind making the niche sport more mainstream. 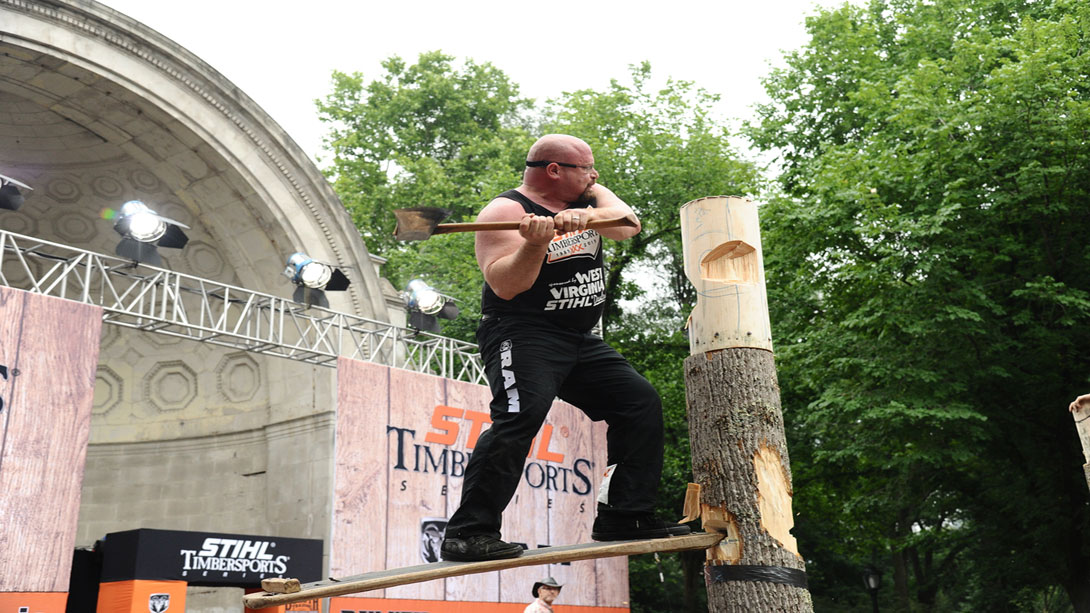 “I’ve seen all 30 years of STIHL Timbersports; I’ve been doing Timbersports for 27 years and the previous three years I was in the audience,” Cogar Jr. says. “By coming to New York City and larger venues like Florence, Italy, where there were several thousand people in attendance, it’s progressing to where people are identifying not only the sport but the individual athletes. When that happens, you see exponential growth and popularity for the sport.”

Cogar Jr. does full body movements such as clean and jerk, snatch, deadlift, and kettlebell swing to ensure proper strength, coordination and timing in the six competition events.

The relentless pursuit of faster chopping and sawing times has led to more advanced equipment and a different breed of athletes.

“It used to be guys that are light and scrawny, little woodsman guys, but now because of the skill and technique involved, we’re getting bigger guys who get their axe deeper into the wood than ever before,” says Brad Sorgen, STIHL Timbersport Series Executive Producer. “We’re seeing times drop. A 20-second chop is now down to a 15-second chop. Now anyone can pick up an axe and swing it.”

Stay tuned to M&F for more from STIHL Timbersports.

8 Common Workout Injuries and How to Heal Them