He’s built his career on being a funny fat guy, but Zach Galifianakis surprised everyone when he stepped out onto the red carpet on Monday to promote the new film Birdman with his fellow castmates at the New York premiere.

He appears to be down at least 50 to 60 pounds since early 2014, but currently he’s quiet on how he accomplished such a substantial transformation.

At the premiere, E! reporter Alicia Quarles got a question in about his weight loss but was outmaneuvered by Zach’s evasive, dark sense of humor.

“I’m dying,” he told the reporter with a straight face.

However, in an interview with WGN’s Dean Richards, he opened up a little more but still kept it humorously vague.

Alcohol is obviously a major factor in body composition, hormonal response and overall health, but Zach showed relief that he was able to walk away from his long-time struggle with the substance, something he’s been blunt about since his early days as a standup comedian.

“Lucky, I’m lucky that I could just stop, but boy I miss it.”

He ended on a high note, though. “But being light’s fun! I can go up two flights of steps now and only need my inhaler twice!”

We’re curious if he’s still on the path to weight loss, how he’s been training, and if this is for an upcoming role. Either way, it’s an impressive transformation and we’re sure he’s feeling a lot better these days.

Here’s closer picture to gawk at: 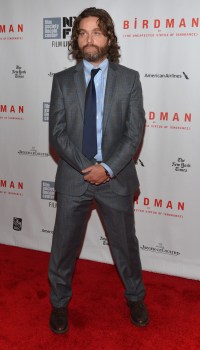 Riff Raff is Training with Hulk Hogan for the WWE

Brothers Eat Nothing But Chicken and Broccoli

There's being dedicated to a diet, and then there's this.

Celebrities Who Admitted to Taking Steroids

Most people deny using gear, but these stars didn't.