This all began because I wanted to understand fighters. What are their needs? What goes into their preparation? How does one prepare physically and mentally? Throughout this process, I expected to uncover much more about the athletes I work with on a day-to-day basis in sports marketing, but it turned out who I learned the most about was myself.

I started with a goal and a detailed step-by-step process on how to reach it. That goal was to compete in an amateur fight. I gave myself 12 weeks to prepare. With no previous training, this was kind of a crazy idea! I mean, what coach would want to risk making their gym look bad?

Between day one and fight night, I completely transformed as a human being – physically, mentally, psychologically and professionally. I either trained in the morning before work, at night after work, or often both. For the first four weeks, I did HIIT (high intensity interval training) in the morning, to hyper-focus on conditioning, and boxing, muay thai and jiu jitsu at night. I knew that what I surely lacked in skill needed to be compensated by my gas tank.

During the second month, I spent more time doing my homework. I studied tape. Shadow-boxed in my room at night. Turned off the lights and practiced submissions on an imaginary opponent (crazy, I know). As camp entered month three, I trained with weights much less and focused on preparing my mind for the task at hand.

My nutrition varied week-by-week. I started with a high-carb diet to fuel me during a level of training I’d never experienced before. I dropped from 208 to 194 pounds in the first couple weeks and plateaued. After that, I cut certain carbs (bread and rice) to keep dropping weight. I had to be careful not to lose too much too fast while not waiting until the last minute to make weight (amateur fights are same day weigh-ins). Half way through camp, I cut all carbs and worked off healthy fats (coconut oil powder and avocados), but as sparring intensified, I simply could not perform at a high level by running on fats alone.

After getting my butt kicked for two straight hours during sparring one day, I strategically re-introduced carbs back into my diet. And when in doubt, Quest Bars have always been kind of a go-to, whether on the road or in training. High protein, low sugar, and great flavors are a pretty hard combo to beat. During fight week, at about 174-177 pounds, I cut salt and didn’t even have to dehydrate… I actually came in 5 pounds light! People kept telling me I wouldn’t make weight, so proving them wrong was the sweetest victory I had all camp. 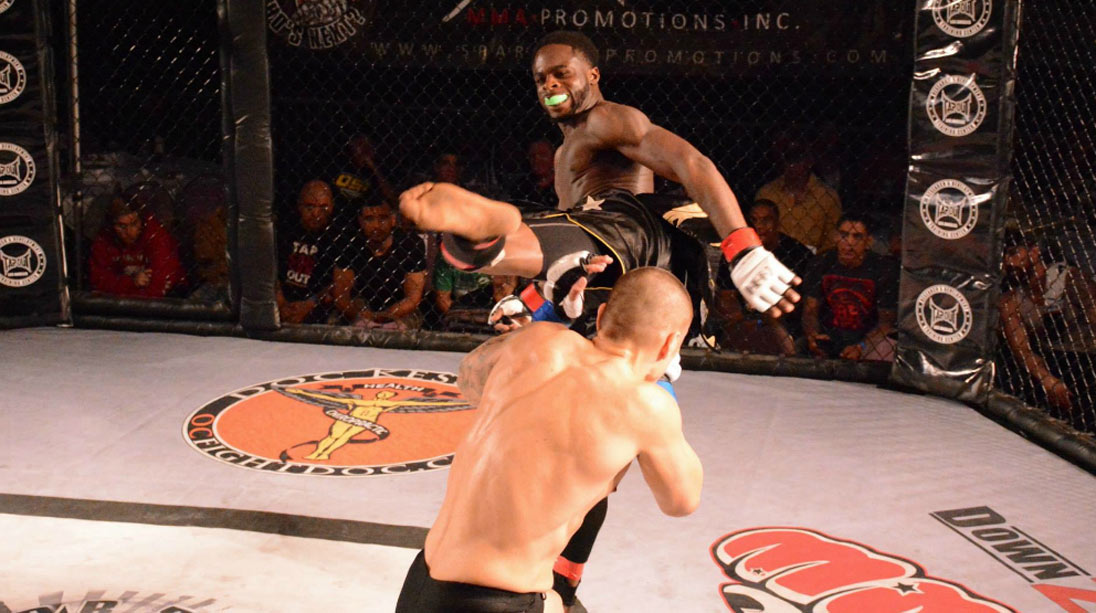 This was my favorite part of the entire experience. Taking on this goal put me in a head-on collision course with fear and I loved every second of it. Every moment of every day I thought about this fight. What’s the worst that can happen? Loss? Embarrassment? Freak injury? BRING IT ON! While driving, I listened to music that pumped me up for training… but going into practice with an aggressive mindset wasn’t working.

My music choices gradually got softer. I found that in order to go into battle, you must be at peace. A calm, collected mind allowed me to learn, perform, and recover more efficiently and effectively. This was VERY important, as everyone I had talked to said that the adrenaline rush and subsequent drop,which occurs during debut fights, was a big hindrance to performance.

I relaxed by watching movies… people who overcame by preparing their minds and bodies… then read about the principles taught within. One great example is The Last Samurai, specifically the concept of “Mushin,” or, “no mind.” It is very similar to the concept of “flow,” where you are so totally in the moment that you act and react using only your subconscious.

My opponent was never actually set in stone; there were five changes before the fight, which is part of the amateur game — the only certainty is uncertainty. The last change was literally 48 hours before the fight, which is where mental preparation really came into play. At that point, I was so physically and mentally ready to get into the cage that it was irrelevant. I realized the outcome of the fight didn’t even matter to me anymore.

All the physical work was done. It was time to drill some final techniques and rest. I took the week off work to get my mind so absolutely bulletproof that nothing could stop me from completing my goal. I experimented with float therapy, hyperbaric oxygen, infra red saunas, cryotherapy, drank lots of tea, meditated, stretched in the dark, shadow boxed with a blindfold on… I truly became one with myself. I’d never felt so tranquil in my life. Meanwhile, I’m about to walk into a steel cage where someone was looking to take my head off! The two worlds were so far apart, yet still so intertwined.

So what is there to take away from this? I set out trying to understand the fighter by becoming one, but what I ended up doing was figuring out who I was as a human. Come fight night, I was so calm and happy that the job was all but done. I learned that despite what some people may believe, battles are not won before they are fought. They are won after all is said and done. It is then our choice to either grow or remain the same. I chose to grow, long before the bout began. And in that, I had already won. That is what the warrior is. That is what a fighter is. The person who accepts fear, failure, and defeat all as possibilities, trains the body and mind to prevent these outcomes, and holds themselves responsible for their own thoughts and actions, to grow from whatever comes to pass.

Vasa Martinez works in sports marketing @QNSports and @QuestTraining. He’s been instrumental in the growth and implementation of the Quest AllStrike, an innovative new tool for hand-to-hand combat training.

All photos courtesy of John Walsh, The Clinch Report

You can't be fit and healthy when you're feeling the weight of the world.

How the world-famous duck caller and 'The Fowl Life' star stays fit and focused.

Perfect your form to build bigger pecs with these pro-tips from "The Prodigy."