After waking up at 3:45 A.M., Jason Lentz drives 2 1⁄2 hours, works 11 hours as a pipe layer, and drives another 2 1⁄2 hours home to rural West Virginia. Suffice to say, life for this small town lumberjack with realistic aspirations of winning a championship is a workout in and of itself.

But that’s what it takes for Lentz, the son of six-time Stihl U.S. Champion Mel Lentz, to prep for a run at his first pro title at the 2016 Stihl Timbersports U.S. Pro & Collegiate Championship in July. When he returns home from work, Lentz pushes through any signs of exhaustion and blasts away at a hybrid-style workout that fuses weight training and CrossFit elements. He can shy away from the StairMaster and situps since lumberjacks are working more on their cardio and core while splitting wood along with burning 400 to 500 calories per hour. And just as training for full-body strength is key, so is the use of video to dissect form.

SEE ALSO: How to Get Lumber-Jacked

“The more people who watch,  the more feedback you get on what you did right and wrong. This is a generational sport, and the longer you’ve competed, the more you know about how to be successful,” Lentz explains.

“Two years ago I didn’t even make the finals, then last year I went to second. So this year I have nowhere to go but up, and Matt’s in front of me,” Lentz said. “I’m a competitor, so he’s got a bull’s-eye on his back.” 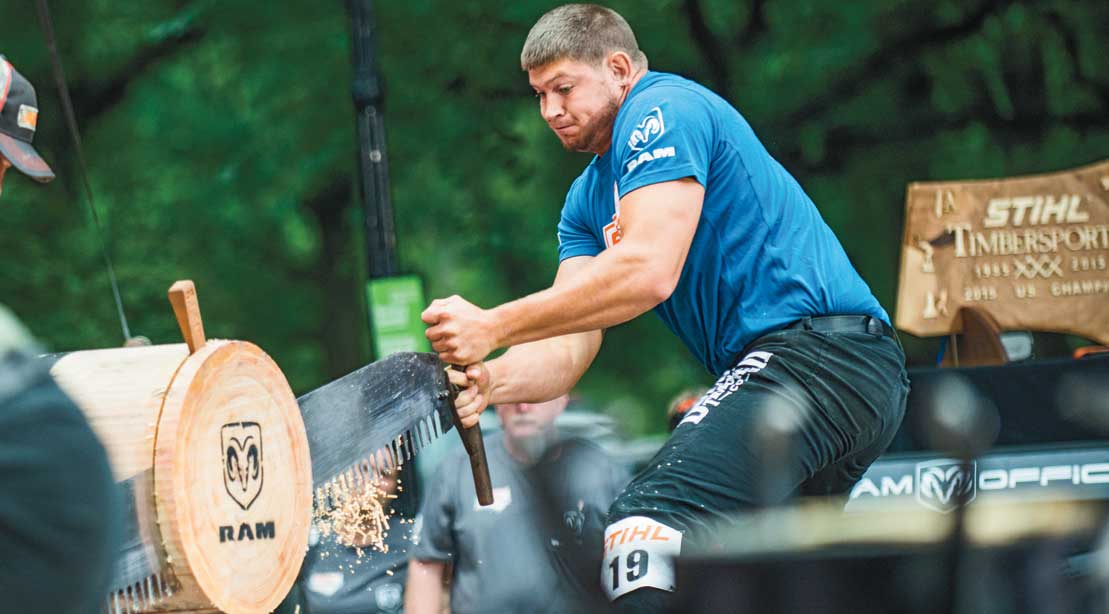 Lentz’s competitive mindset isn’t all that surprising considering his pedigree. His father, Mel, 57, considered to be the “king of the lumberjacks,” won his six titles over nine years, from 1986–1995. More surprising is that Jason didn’t dive into the sport as chipper as one would expect from the son of a legend.  “Dad wasn’t around when I was a kid,” Lentz says. “He was off woodchopping.”

Even though Lentz never saw himself lumberjacking at this elite level, he fondly remembers the times his father would come home with the hardware. “I’d actually jump on him and tell him to let other people win,” he recalls.

Lentz’s rapid ascent to the top of the lumberjacking world got a jump-start around age 13, when his father’s friend Jim helped coach him. But Lentz was hesitant out of the gates. “I didn’t really put in that much time,” Lentz says of his neophyte days in the sport. “It was a summer thing.”

Instead, the 6’6″, 225-pound athlete fell in love with a different game: basketball.

At Division III Eastern Mennonite University in Virginia, Lentz had an absurd 58 blocks in 2004. “I wanted to be the next Michael Jordan,” he says.  As much as he wanted to “Be Like Mike,” lumberjacking eventually called to Lentz, who is confident in his future and his chances in July. He has a pair of brand-new saws he’s excited about, which is feeding his faith in the sport.

“I never really had a good saw, so if I can perfect my skills, I don’t think anyone can beat me,” Lentz says.

Lentz considers chopping—a discipline using an ax—one of his strong suits. He had the quickest time chopping on the standing block (one of six disciplines in the competition) last year. “I work hard every day,” Lentz says. “And I know when to grit my teeth and push on.”

Lentz’s toughness has paid off, and he’ll have a chance to flaunt his tenacity in Chicago. There, fans can see the highest level of lumberjacking, a sport that Lentz believes is “doing nothing but growing.” For young ones getting into the game, Lentz says it can be a challenge. In Australia, where he spent time training, he knows of kids starting at 7. “Learn really young,” Lentz advises. “And if it’s something you want to do while you’re young, stick with it.”

The path to the top seems simple, but it wasn’t early on for Lentz, an 11th-generation lumberjack. The sport’s next big star, who was seemingly destined to be, wasn’t sure what to do at the fork in the road. “After basketball, I was like, ‘Wow, what do I do now?’” Lentz says. “So I picked up an ax and stuck with it.” Lentz may have been late to the lumberjacking game, but this early riser is ready for that long drive to stardom.