Thirty-three year old Flex Lewis (his birthday is today, November 15th!) originally hails from Wales, and now lives in Florida with his wife IFBB Bikini Pro Ali Rosen and their (almost) one year old daughter Adiena Page. Flex's interest in bodybuilding began at the age of 12, when he came across a book on bodybuilder Tom Platz. Specifically, it was the incredible legs on Platz that inspired Lewis to start working out. At first, he secretly lifted his father’s weights when no one else was home. By age 15, he stepped into a gym for the first time to add some size for Rugby, and never looked back.

Flex Lewis won his very first bodybuilding competition, the 2003 EFBB Jr. Mr. Wales, where he met the man who became (and is still) his coach, Neil Hill. After an impressive string of wins, Flex earned IFBB Pro status with an Overall win at the 2007 British Nationals.

At 5’ 5.5” tall, Lewis quickly cemented himself as one of the best 202 lbs-and-under bodybuilders in the world. Then in 2012, the IFBB upped the maximum weight limit of the division by 10 lbs, and Flex Lewis’s 212 bodybuilding legacy began.

Lewis won the first-ever 212 Olympia title in 2012, and has held on to the most prestigious 212 Bodybuilding title ever since, becoming the five-time champion this past September in Las Vegas, Nevada.

"I’ve known Flex since he was an amateur and so have had the pleasure of watching him rise through the ranks to his current status as the best under-212 pound bodybuilder in the world. It’s extra gratifying to know that he isn’t just a great champion, but also a charitable human being, devoted husband, and loving father. I’m honored to call Flex a friend and a Weider athlete,” says AMI Chief Content Director Shawn Perine. 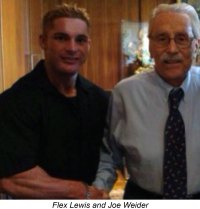 When asked about re-siging with AMI/Weider, Flex Lewis had this to say, "It was an honor to sign with Weider at just 23 years old, and to have Joe Weider personally welcome me to the family. Ten years later (to the month), I have re-signed a new contract yet again. I feel that I am on a mission to continue what Joe started, and bring bodybuilding and fitness world-wide as a champion and ambassador of the sport. I can’t thank AMI/Weider enough for their continued support. Here’s to another great year both on and off the stage!"

Lewis has considered moving to the Open Class, something that many of his fans would love to see him do, but he is determined to create and leave a legacy in the 212 division. With five 212 Olympia titles under his belt, and 14 consecutive pro wins to date, that is exactly what he’s doing. – FLEX 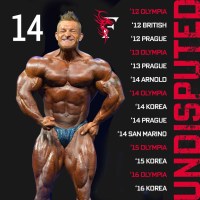