With 300-plus licensees in 39 states and 20 countries, Powerhouse Gyms International (PHG) continues to thrive in a competitive health club business. 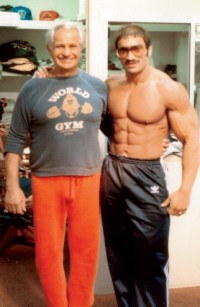 Founded in 1975 by William Dabish and his late brother, Norm, the original Powerhouse Gym in Highland Park, MI, still stands today and is a symbol of the rich history behind the topnotch fitness brand.

A former competitive bodybuilder and winner of the 1982 Bodybuilding Championships, Will Dabish has been the driving force behind PHG’s global success. Dabish’s unflagging hard work, commitment to tradition, and awareness of the market continue to propel the family business forward.

Ever the serious fitness enthusiast, Dabish has rubbed elbows with the industry’s best athletes and his never-quit attitude is a refection of his training mindset.

“I never needed motivational quotes to push me,” says Dabish. “It is your willpower that’s with you for eternity. Either you will or you will not.”

Dabish’s determination to improve his body translated into a jacked physique, especially a big and strong chest.

“Back then, my training partner and I would do 20 sets in 20 minutes, take our breather, and move on to the next,” says Dabish. “I eliminated the normal excuses that people make, like ‘I’m too sore” or ‘[I’m] too tired’ and I attacked every workout.”

While his roots are in hard-core muscle building, Dabish recently recognized an emerging type of training, functional fitness, and offered the PHG name to its clientele. Launched in 2013, Powerhouse FX offers certified personal trainers and cutting-edge facilities for functional fitness training, including the use of battling ropes, kettlebells, and suspension trainers.

Looking ahead, 2015 marks PHG’s 40-year anniversary and “Big Will” Dabish will keep right on championing its legacy.

“I refuse to retreat and refuse to surrender.” – FLEX