MIKE MATARAZZO STUCK HIS TONGUE OUT. He did it every time he crunched a most-muscular during his 31 pro shows. And the crowd always roared. Even though he never won a single one of those 31 contests, he was beloved by bodybuilding fans. They adored him because the tongue out said I’m loving this. His trademark gesture punctured the artifice of the cooler-than-thou bodybuilding persona. He wasn’t going to saunter about serving up faux smiles as if doling out gifts.

Forget that. This Bostonian was, at heart, a blue-collar worker, and he never forgot his roots. So when he locked in his most muscular and his tongue jutted out of his grinning maw, he was letting everyone know that, no matter his placing, he was having a blast. And the crowd roared in solidarity. 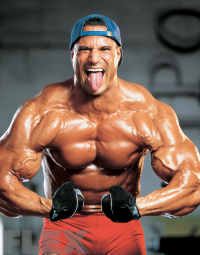 is a working-class city adjoining Boston. That’s where Mike Matarazzo Jr. grew up. “I wouldn’t change a thing,” he said of his hometown. “My family didn’t have any money, but the buddies I grew up with were the closest friends I’ve ever had in my life.” Inspired by fellow Italian-American Rocky Balboa, he boxed. He won the 1985 Massachusetts Golden Gloves light-heavyweight championships. But while working out for the ring, Matarazzo discovered he liked hitting weights more than getting hit.

“Dave Draper, Arnold Schwarzenegger, Lou Ferrigno, Mike Katz, Sergio Oliva, and Frank Zane,” Matarazzo answered when asked to list his early iron influences. “I idolized all of the bodybuilders who came from that old-school, hardcore era. They didn’t need any fancy equipment. They trained with intensity and focus, regardless of the gym or other limitations.” That was the ethic this Bostonian truck driver brought to his workouts. And he ballooned up as a consequence. At 5'10" and 226 pounds, he won the overall title at his first contest, the 1989 Gold’s Gym Classic in Massachusetts. Early in 1991, in the tradition of some of his aforementioned idols, he moved to Venice, CA, to train at Gold’s Gym.

I was there then.

Bodybuilding’s mecca was beginning its second renaissance. The first had been in the ’70s with Arnold and company. This second, in turn, was fueled by bodybuilders born in the ’60s who grew up idolizing Arnold—guys like Flex Wheeler, Chris Cormier, and Shawn Ray, who were part of a wave of talent that created an ever-expanding surplus of elite pro physiques during the ’90s. It seemed daily an unknown amateur was showing up at Gold’s from somewhere around the globe, chasing a pro card and a Weider contract. In those years before the ubiquity of the Internet, sporting 20-inch guns and sweating in Venice was the shortest route to physique fame and fortune. But for every Günter Schlierkamp there were a dozen Gunnar Rosbo’s—“can’t miss” prospects who never flexed on a pro stage.

Matarazzo got noticed in Gold’s Venice in the spring of 1991 as he prepped for the USA Championships. How could you miss his Olympia-quality arms and calves? But what had he done? His complete résumé consisted of winning a local show 2,600 miles away. Legends and future legends in Venice dismissed him as “that Maserati guy”—just another wannabe whose name they would never need to bother learning.

It was much more difficult for Americans to earn pro status then than now. Only the overall USA and North American champs and the Nationals class winners did so. And there was no super-heavy class, which meant every amateur over 198 pounds was crammed into the heavyweight division, creating a perpetual logjam of future pro title-winners.

Best-case scenario: Matarazzo could fight his way into a pro-qualifier top 5, then climb the ranks in subsequent shows. But to jump into the lion’s den in 1991? His friends back in Boston told him he was crazy to enter the USA the second time he even oiled up. They advised him to stay on the East Coast and build his name in smaller shows—the Jr. USA, the Jr. Nationals. Matarazzo wasn’t hearing it. He’d brought his blue-collar ethic to the laid-back mecca. His gains were dramatic, and he wanted to see where he stood against the NPC’s best.

Matarazzo didn’t just get noticed at the 1991 USA. He won the heavyweight class and the overall, beating such future legends as Wheeler, Cormier, and Ronnie Coleman. At 25, he earned the right to turn pro on his first try in only his second contest and against a stacked field. His is the most improbable dash from amateur to pro in bodybuilding history. “No one, except yours truly, believed I had any hope of claiming that title,” he remembered. “I had guys tell me that I wouldn’t even get a single callout. Then, when I won the show and turned pro, it was a magical experience.”

Two months later, with the same confidence that had fueled his USA quest, he jumped into the Mr. Olympia. Why not?

He was undefeated and the talk of bodybuilding, and, as with the USA, he needed to see just where he stood. That’s when he learned firsthand how great the schism is between the best amateurs and the best pro’s. While Lee Haney collected his record eighth Sandow and Dorian Yates foreshadowed the mass infusion to come, Matarazzo failed to place. So he wasn’t invincible after all. Still, he was newly signed with Weider, where he remained for 15 years. In 1992, he appeared on four magazine covers, including his first FLEX. Also in 1992, on his way to finishing fifth at the Ironman Pro, he initiated his Gene Simmons-style tongue shot and debuted the now-common act of posedown participants jumping of stage and flexing in the audience. Fans loved him. 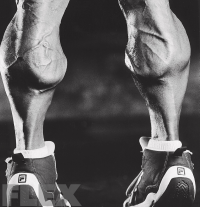 Matarazzo had two crowd-pleasing parts—his biceps and his calves. His lower legs rank among the best ever seen. By contrast, the muscles of his long torso trailed those of his limbs. His lats were his greatest weakness, though he sometimes disguised this with a panoply of back cuts. This was true of the 1993 Arnold Classic, when he went thoroughly high-def. His greatest obstacle was the surplus of quality physiques in the ’90s. The logjam of future legends he had escaped with his one-and-done USA victory clogged up pro posedowns in subsequent years. This made it difficult for Matarazzo to grow as popular with discerning judges as he was with his legion of fans.

His sixth-place finish in a deep field of 16 at the 1993 Arnold was arguably his greatest pro accomplishment. Another highlight was his ninth at the 1998 Mr. Olympia. And he twice finished second in lesser shows. But, in 31 IFBB Pro League contests, he never won a title. He did seven Olympias, but ’98 was the only O in which he landed in single digits. Four times at bodybuilding’s Super Bowl he was either last or he failed to place, including a humbling 21st out of 21 at the 2001 Olympia (after qualifying with a fifth in a deep field of 37 at that year’s Night Of Champions). That Mr. O was his final contest. He was only 34. It wasn’t necessarily a retirement. Weighing an off-season 270, he continued to train, and he remained a fixture behind Weider booths at bodybuilding events. In 2004, he was considering a comeback the following spring. But something didn’t feel right. Something hadn’t felt right for a long time.

Matarazzo had grown increasingly lethargic for years. Then in December 2004, he woke up straining for breath and coughing up blood. His then-fiancée rushed him from their Modesto, CA, home to the hospital. There he underwent triple-bypass heart surgery. He was only 38. 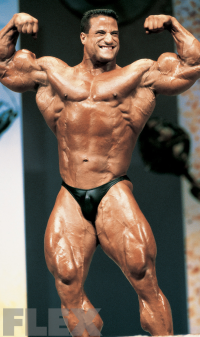 he did two interviews with FLEX that have reverberated through the bodybuilding community ever since. In the first (March 2005), he stated that he had genetically high cholesterol, and he spoke wistfully about the health he had lost and gratefully about the life he still had. In the second (July 2005), he zeroed in with candor on what he could’ve done differently.

“I’d have to say that everything that led to my heart problem began the minute I started getting serious about competitive bodybuilding,” he stated. “In order to get bigger, I ate five, six, seven pounds of red meat a day, no vegetables. And I’d stay away from fruits because of their sugar. Worst were the chemicals…I have no doubt in my mind that the primary cause of my problem was the chemicals. It was the steroids, the growth hormones, the diuretics…I wouldn’t in a million years change a lot of the aspects of bodybuilding, but that’s the one aspect I’d discontinue if I had a second chance.”

Asked “What should those who still have a second chance do about it?” the 1991 USA winner responded: “Put [the drugs] away. Only a handful of men on this entire planet make barely a decent living at bodybuilding. I happened to be one who did for 15 years, but I probably took 20 years of my life. No amount of money in the world is worth that. I’d rather go back in time and get a nine-to-five job and live to a ripe old age, like my grandfather…I took the gamble and lost in every way. Physically, I’m completely limited. Financially, I’m pretty close to ruined. Emotionally, it made a guy like me—whose only fear in life was the loss of his mother and father—afraid of every little ache and pain.” Matarazzo encouraged bodybuilders to buy health insurance and get frequent medical checkups. (He had no insurance and endured mammoth bills.) “Worry about keeping that body of yours as healthy as possible, because it’s going to have to last you not just through your next contest or to the end of your bodybuilding contract, but for a long time. And a long time for a human being is nothing. It goes by real quick, even quicker when your health is gone and you have nothing to stand on.”

Matarazzo suffered a heart attack in November 2007. He underwent bypass surgery again and had a defibrillator installed. In the aftermath, his heart worked at only 20-25% of typical functionality. 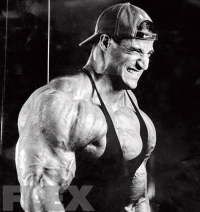 He focused on his wife Lacy and their three children. Returning to his blue-collar roots, he worked as a bail bondsman. He did cardio, sometimes on the heavy bag like his old boxing days, and light weight training, always wary about pushing himself too hard. When people talked about him on the Internet, he never knew unless a friend told him and his lessons learned. Claiming to be a “caveman,” he didn’t log on to computers. 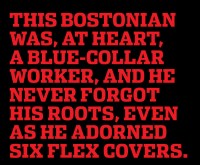 fishing with his kids, just as he had done with his father four decades prior. In the small city of Modesto, where he moved in 1997, he lived the anonymous life the Italian-American kid from a working class Boston suburb might have had all along if he hadn’t rocketed to worldwide fame at the 1991 USA. But it wouldn’t last. Increasingly, he relied on his family, friends, and Catholic faith. He was hoping to get a heart transplant when his heart beat for the final time on August 16. He was 48.

In 2003, when FLEX asked Mike Matarazzo how he would describe his legacy, he answered, “That a regular guy from Boston could break into a tough business and prove that he doesn’t have to change who and what he is to suit changing circumstances. I’m still the same down-to-earth guy who moved from Boston to California 12 years ago.” The final question in that interview 11 years ago was what did he hope to hear at the pearly gates. The “People’s Champ” responded, “Come on in, Michael, you’ve been a very good man on Earth. Enjoy your eternity.” FLEX