If you thought essential fatty acids were a settled subject, think again. A new study just presented at the National Strength and Conditioning Association (N.S.C.A.) conference suggests that sports nutrition scientists have long been missing the mark on EFAs. It proposes that trained athletes looking to increase muscle mass, strength, and anaerobic power would benefit by supplementing an omega-6 called arachidonic acid (ARA). This advice is, of course, in stark contrast with the traditional recommendations for omega-3 supplements. How did we discover the importance of this omega fat, and what does this new information mean for athletes and everyday fitness enthusiasts? As one of the scientists driving and funding this research, FLEX has asked me to come by and bring everyone up to date.

Let’s begin with a little background. Arachidonic acid is a polyunsaturated omega-6 fatty acid, common in our diets. It is found in animal products, most notably beef, chicken, eggs, and fish. On average we consume about 100–200mg of it per day. ARA is the most active fat in the omega-6 class, playing essential roles in neurological development, immunity, memory and learning, bone mineral density, insulin sensitivity, and cardiovascular health. About 13 years ago, researchers first started to link a metabolite of ARA—the prostaglandin PGF2-alpha—to muscle growth. It appeared this cellular messenger was necessary for the stimulation of protein synthesis after exercise. I took this research one step further by experimenting with supplemental ARA, reporting its utility for the first time in 2002.

This latest study, which strongly validates ARA as a sports supplement for the first time, was conducted at the University of Tampa. Thirty well-trained college-aged men were recruited and split into two groups. In one group the men took 1,500mg of ARA daily. In the other, they took a placebo. For eight weeks everyone followed a controlled resistance-training program. By the end of the study, there were significant differences in the results from each group. 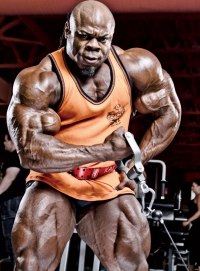 First, let’s look at lean body mass. The men in the ARA group gained an average of 3.6 pounds, while in the placebo group they gained only .2 pounds. The ARA group also noticed an 88% greater increase in quadriceps thickness (.47cm vs. .25cm). Strength was significantly improved with ARA as well; 110 pounds gained on bench and leg press vs. 76 pounds. Lastly, peak anaerobic power increased nearly three times more in the ARA group (78 watts vs. 28 watts).

What about the health effects of supplementation? Part of the role ARA plays in immunity is to support the inflammatory response. This is actually key to its effect on muscle growth (tissue repair begins with localized inflammation). This has led some to question if simply supplementing ARA might cause inflammation. We don’t want inflammation when and where it is not needed, after all. Thankfully, this question has been answered. Supplementing up to 1.5g per day has been shown to produce no change in resting inflammatory or general health markers. In fact, one study with resistance-trained men even found a reduction in resting inflammation with 1g of ARA daily. Granted, ARA is still used by the body to support inflammation when needed. If there is an inflammatory condition present, supplementation is probably not advised. Otherwise, ARA is not a trigger, and has been shown to be safe to supplement.

So, what does this all mean for athletes and everyday fitness enthusiasts? It certainly means that effective new supplements are on the horizon for enhancing muscle size, strength, and power with resistance training. In fact, there are a few ARA products on the market already. One of the most visible is the testosterone booster/anabolic product Animal Test from Universal Nutrition. Axis Labs also makes a pre-workout anabolic pump product using ARA called Hemodraulix. As for the pure ARA supplement tested in the Tampa study, that was X-Factor from my company, Molecular Nutrition. With this study having just been released, consumers can expect to see many more product options with ARA in the near future.

Whatever arachidonic acid product you do end up trying, here are my suggestions for getting the most from it. First, ARA is effective across a broad dosage range. On the low end, as little as 100–250mg per day can be used to support gains. However, if you want the strongest muscle-building effect possible, go for the higher end of the range (750–1,500mg daily). Take this 45 minutes before your workouts for eight weeks, and then take an equal break. Also, I recommend using ARA for the first time when you have hit a plateau. It’s here that its effect on muscle growth will be most obvious (ARA is also excellent at breaking plateaus). Give it 2–3 weeks to load into your muscles, and you should start noticing your gains pick up again!