It’s driving me crazy that I can’t build my hamstrings. My thighs look good from the front, but from the back, there’s nothing. Do I just have bad genetics?

You’re not the first person to have a tough time building hamstrings. In fact, I’ve known many people who share your dilemma. That muscle group in the back of each thigh is a tough sucker! Take heart, however, that everybody I know who had a problem was able to bring up their hams with some targeted training and a little elbow (knee) grease.

Hamstrings, known technically as biceps femoris (because they have two heads and span the femur), are worked with two primary movements. One, with which you’re already familiar, is the curling motion. There are several variations of leg curls: lying on your stomach, sitting, even standing on one leg. Each exercise works the hamstrings in a slightly different way, which I will describe momentarily. 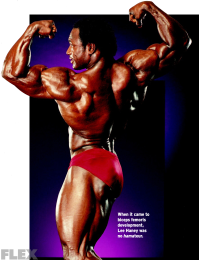 If I could pick only one kind of curling movement, it would be lying leg curls. They are the most basic of all hamstring exercises and can be altered to place the stress on different parts of the back of the legs. If you point your toes inward, the exercise will focus on the inner of the two heads of your hams. This is good for filling in the inner portion of your upper thighs. By pointing your toes outward, you shift the stress to the outer hamstring heads and the glutes. Doing lying leg curls this way really helps carve detail into your outer hams, which is what the judges see when you’re doing a side chest shot.

Seated leg curls have come into fashion within the past few years. When I was competing, these machines weren’t around, but nowadays most gyms are equipped with them. Performing curls while seated hits the inner hams and adductors for the most part. It also gives you a different feeling from the lying version. I particularly like the stretch at the top of the movement.

Standing one-leg curls are an old standby for me. What’s great about this exercise is the way it allows you to focus on one ham at a time and to really squeeze at the top. I consider these curls a great finishing movement.

Stiff-leg deadlifts are essential for massing up hamstrings and for strengthening the legs, hips, glutes and lower back. It’s important to remember the name of this exercise. They’re called stiff-leg deadlifts, not straight-leg deadlifts. Keep your knees rigid while performing them, but not locked out, because this could lead to tendon damage and back injury.

I’ve included a hardcore hamstring routine for you. Normally, I would train my quads in the morning and my hamstrings in the evening, so this is a standalone program. Give it eight weeks and see if it doesn’t put some hanging hams on the back of your legs! – FLEX