Somewhere in the late 80s, a late-night infomercial turned the world of arm-training on its ear. “Triceps represent three quarters of your upper arm mass,” the announcer said, matter-of-factly. Wait, what? Really? Then why the hell do I wreck my biceps all day?

Now, don’t get us wrong, some people out there have understood this for decades but some of us were still slow to catch on. And looking around the gym today, some people are still pretty one-sided with their arm training. To bring balance, symmetry and aesthetics to your arms—if you’re into that sort of thing—you need to understand that can’t live by curls alone. You need to figure out how to train your triceps, especially if you expect to tap into that “three quarters” that infomercial mentions.

Here we address three of the most common complaints we hear from you about building bigger triceps, and some practical remedies you can implement today.

1. My biceps tend to overpower my triceps. Why is that and what can I do to fix it?

“Ahhh, the ‘show me’ muscles!” says New York-based trainer Rocco Castellano, NASM-CPT. “We only work the muscles we can see. You’re obviously not hitting your triceps as hard as your biceps. Triceps are three muscles compared to two muscles, so they need to be hit at least one third harder than their counterpart. If you schedule an all-arms day, I would hit your triceps first with two compound movements and one single-joint or finishing movement. On a push day (chest, shoulders, triceps) keep it to two movements, one compound one single-joint move compared to your biceps, which I would limit to one exercise until you feel there is a balance.”

M&F Fitness Director Jimmy Pena, MS, CSCS sees a few additional possibilities: “Are you training your biceps alone or with something else like back? What about your triceps? If you’re training your biceps alone, then tossing your triceps in at the end of a chest or shoulder workout, you’re treating them as an afterthought and that’s how they’ll respond. And if you’re training bi’s and tri’s together, you probably train biceps first. Try to mix up which muscle group you train first to ensure balance. Finally, don’t always chase a pump with your arms—if you expect them to grow, then you need to challenge them with heavier weights in the 8-12-rep range.” 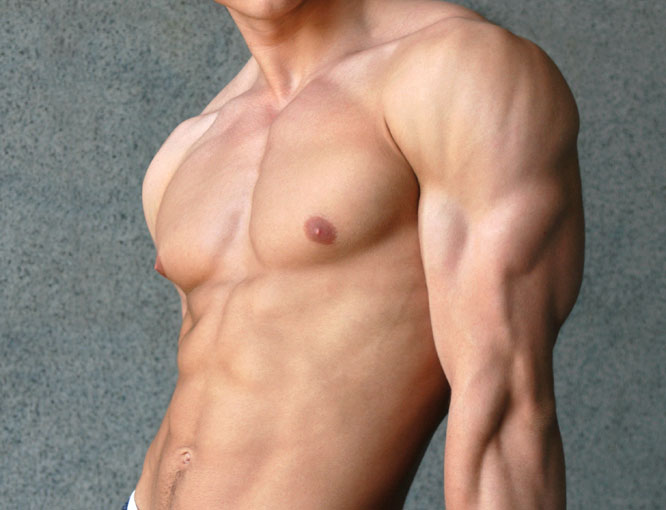 2. I just can’t seem to bring up that outer horseshoe part of my triceps, even though my inner triceps are pretty meaty.

Castellano, who advocates variety in the gym, suggests shaking things up for getting untapped muscles involved. “Creating a little chaos in the joint does the trick here. You can do that by utilizing cables, ropes and towels on a push down machine. As you push down on the positive phase of the movement you will find that your arms shake a little, this is the instability that I’m talking about. Your neurotransmitters are now asking your brain to recruit another muscle to help out with the load. That’s where the weaker heads come in to stabilize the joint.”

“Well in any triceps exercise, you’re working all three heads of the triceps, just to varying degrees,” says Pena. “If your outer, or lateral, head is lagging, you may be doing a few too many skullcrushers or overhead dumbbell extensions which hit the long head. Pressdowns, where your elbows remain at your sides, blast that lateral head.” 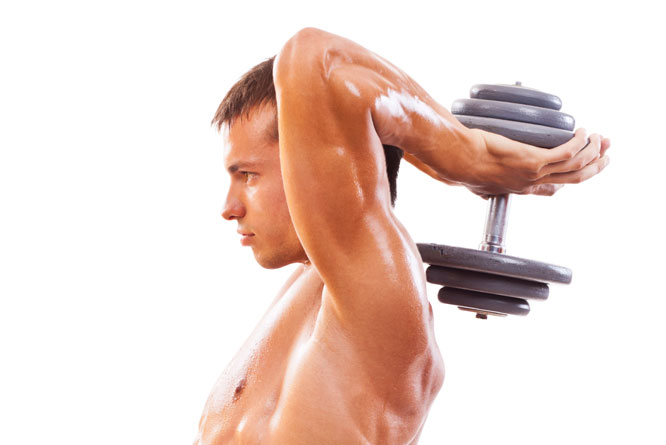 3. I do plenty of extensions—lying, cables, dumbbells, overhead, kickbacks—but can’t seem to add any real size to my tri’s. Am I doing something wrong?

“You’re doing wussy exercises and you’ll stay in Punyville until you step up and complete some heavy compound movements,” says an animated Castellano. “Compound movements multiple joints to complete a specific task. Try weighted dips. Another of my favorites is the negative close-grip bench press with a drop. Aim for 3-4 heavy negatives and immediately strip the bar by 30% and perform 15 more reps. Add the weight and start all over for at least two more sets. If you want to get massive you need to push weight, not a hard concept to grasp. Train smart, train hard and get huge.”

Pena, who also advocates weighted dips and close-grip benches, suggests trying reverse-grip bench presses with a slightly narrower grip than usual. “These fry your triceps and doing them on a Smith machine allows you to safely overload them without fear of injury.”

Rocco Castellano is the founder of askROCCO Media, which provides boot camps, seminars, media content and online fitness services at askROCCO.com. You can also catch some of his irreverent candor at askROCCO.com. He is certified by the National Academy of Sports Medicine and has written “askROCCO Uncensored v1,” available at bookstores everywhere.

Build Popeye-sized arms and take your strength to a new level.

Fine-Tune Your Biceps in 4 Weeks

These new exercise techniques will change your approach to arm training, not to mention the size of your bis.

7 Moves to Avoid in Your Arm Workouts

Busting bicep curls all day and not seeing results? Don't waste your time (or potentially injure yourself) with these ar...