Ann Frederick first stretched Randy Moss before a game in a hotel room in 1999—the future Hall of Fame wide receiver’s second season in the NFL. When Frederick finished her work, Moss left the room and sprinted down the hallway.

He was impressed and declared himself ready to play. “He came back the next day,” says Frederick, “and said, ‘Stretch Lady, I’m faster. I’m Randy Moss, and you got me faster.’”

Frederick, who owns the Stretch to Win Center and Institute in Tempe, AZ, with husband Chris, has been stretching elite athletes for more than two decades. Utilizing a technique rooted in her extensive dance background, she’s managed to win over the likes of Terrell Owens, Larry Fitzgerald, Anquan Boldin, Leonard Davis, Tim Hightower, and Donovan McNabb, with whom the Fredericks have worked since his rookie season. Several NFL players have even paid for their personal therapists to travel to Phoenix for Stretch to Win certification courses, which attract trainers, physical therapists, and coaches from around the world.

Lie down on a Stretch to Win table for 30 minutes and let Ann Frederick go to work on just one side of your body, then stand up and see how it feels. The resulting sensation, which keeps Stretch to Win’s clients coming back year after year, will amaze you.

“If we work just one leg,” says Chris Frederick, “then get up and do a squat, you’re going to be all twisted up, but in a good way. One side will just drop, while the other side is still restricted. On the field, after running and cutting, our NFL guys say it’s like someone just released their parking brake.”

If there’s a secret to the Stretch to Win method, it’s the way the Fredericks decompress their athletes’ joints—an action that forces an almost immediate relaxation of the surrounding muscles. Their technique is known as fascial stretch therapy, which unlike traditional isolated stretching is a global approach that works the entire body’s connective tissue system.

“They all get massaged,” says Chris Frederick, “but you can’t touch that joint capsule with your hands because it’s too deep. This method can. We ‘unglue’ the hips from the deepest level by getting the muscle around the joint capsule to let go.”

This ungluing is in large part a neurological response. Instead of attacking an athlete’s central nervous system (CNS) with aggressive static stretches, the Fredericks “romance” it—calming down the CNS and causing muscles and connective tissue to relax and come unbound. 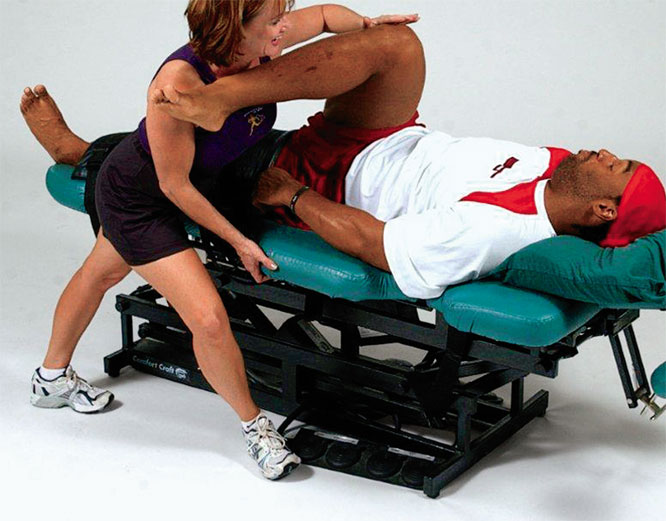 Every regimen the Fredericks design is specific to the physical demands of a player’s individual position. An older quarterback like McNabb, who’s relatively closer to the end of his career, will have an entirely different set of needs from a young running back like Hightower.

“When you look at their individual needs,” says Ann Frederick, “you have to look at where they tighten up more. With football, it’s in the hip flexors, because so many positions start from a flexed position where they have to take off. I’m only concerned about what happens on the field.”

Even the process the Fredericks use to figure out an athlete’s individual needs is specific to his sport. The main idea is to see how easily players can move into and out of their football positions—and then to improve their flexibility to the point where they feel as though their restrictive “parking brake” has been disengaged.

“We’ll look at them standing up and doing squats,” says Chris Frederick. “Then they’ll assume their position, whether it’s a three-point stance or something else, and we can tell right from the takeoff.”

Once an athlete is strapped to a table, the Fredericks look for any discrepancy in leg length, paying close attention to the movement of the hip joint to see if one side of the pelvis is tilted compared with the other. “We’re looking for the kinds of asymmetries that will get them in trouble,” says Chris Frederick. 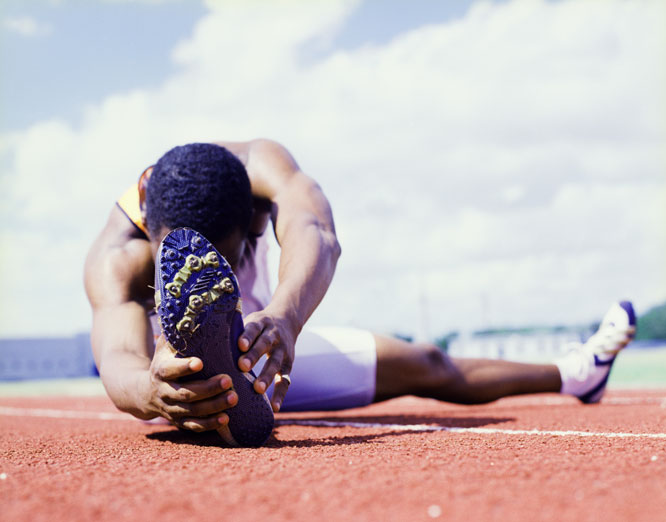 One complaint often heard from football coaches—typically right before someone gets cut—is that a player “can’t open up his hips.” This deficiency is almost always attributed to poor genetics, a misconception that rankles the Fredericks, who consider it correctable.

“Defensive backs get so bound in their hips over time,” says Ann Frederick, “that they lose the ability to open up their stride length and cut. Because our techniques work from the joint capsule outward, we’re able to get in deep enough and open up their hips. I call it ‘unlocking the power of the booty.’”

Ann Frederick says the musculatures of skill position players like defensive backs and wide receivers tend to be predominantly fast-twitch, as opposed to linemen, who are more endomorphic and “gooey-er.” In other words, one stretch does not fit all. “You can’t do the same thing for an offensive lineman that you do for a wide receiver,” says Chris Frederick, “and that’s where parameters for stretching have to be adjusted, just as they are for other aspects of training.”

You may not be able to get out to Tempe for an evaluation by the Fredericks, but you can still take advantage of their advice. Here are three things to do before your next training session:

2. Stretch From the Core:
Stretch the areas closest to the center of your body, then out to your extremities. This will loosen your core regions first and allow you to move.

3. Stretch Hot:
Raise your body’s core temperature by stretching in a heated environment. Heat stimulates blood flow and perspiration, and it relaxes the body and improves your response to stretching.

Break Away from The Barbell with These 3 Resistance Band Workouts

This is the training regimen that 'The Oak' used in his prime.

How Rory MacDonald Stayed Fight Fit During the Pandemic

The Professional Fighters League star is preparing for his 2021 debut.

How James Conner Stayed Fit in the NFL Offseason

The Pittsburgh Steelers running back shares part of his summer weightroom sessions with trainer Arron Sain.