To celebrate the Ravens’ first Super Bowl appearance in over a decade, we dug up this interview with quarterback Joe Flacco by our own Matt Tuthill. Check out his quote about change and motivation below. The big number five certainly backed up those words this season. After the Ravens fired offensive coordinator Cam Cameron just six weeks ago and replaced him with Jim Caldwell, Flacco and his offense dug deep and went on a run that taken then to a showdown with the San Franciso 49ers this Sunday with the Super Bowl on the line!

Check out the interview:

It’s one of the most difficult questions a big-arm quarterback prospect could face: Do you step away from being a backup in Division I-A for a chance to start in I-AA? Choose the former and you risk sitting behind someone for too long to make your mark. Choose the latter and every play you make is sure to be scrutinized by people wondering if you could really do it on the biggest stage.

If you’re Joe Flacco, you do the same thing you do in the pocket when defensive ends are crushing in on both sides: You make a decision and own it.

“With change, there’s always an element of uncertainty,” the Ravens quarterback says of the fateful decision to leave Pittsburgh for Delaware back in 2005. “But uncertainty isn’t bad. It keeps us motivated and striving to become better at whatever we do.”

In Flacco’s case, it kept him working hard in the gym to strengthen his made- for-the-NFL quarterback frame and reputed 74-yard cannon. At 6’6″, he can see a mile down the field and throw it there, too. At 238 pounds, he’s not going down easy. That mammoth stature continues to grow both literally and figuratively: The greatest quarterback in Delaware history has now become the franchise quarterback the Ravens have longed for.

Fans may love him, but to the coaching staff he’s a godsend.“The thing that’s surprising about Joe is his work ethic,” says Ravens Head Strength and Conditioning Coach Bob Rogucki. “He does everything he needs to and he goes beyond that. He’s always asking if there’s anything else he can do with regard to flexibility, strength and specific shoulder work, anything that’ll help him as an athlete.”

This sample routine was designed for Flacco by Ravens Head Strength and Conditioning Coach Bob Rogucki. (According to Rogucki, the number of sets and reps for this workout is proprietary.) 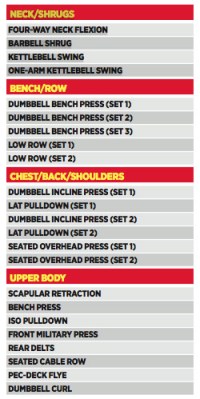 Check out some Flacco moments from 2012:

Get fit like Marky Mark no matter what your age is.

Part of the UFC vet's plan to take out Conor McGregor at UFC 246 is good old-fashioned conditioning.

The MMA lightweight hopes to move up the Bellator rankings.