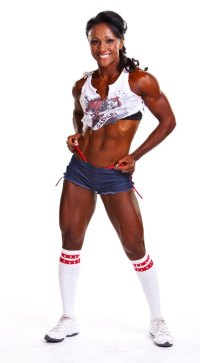 She has credited that win to three things, her faith, her parents and the values she learned while attending the U.S. Air Force Academy.

Johnson was a varsity cheerleader and a member of the cadet Honor Guard and went through several intense military programs like survival training and marine corps officer training. She earned a Bachelor of Science Degree in Humanities and commission as an Air Force officer when she graduated in 1997.

When Johnson separated from the Air Force she gravitated towards fitness looking for a challenging way to promote a healthy lifestyle as well as help change society’s concept of a “real woman”.  She began competing in fitness in 1998 and then took a year off when she got deployed during Operation Allied Force. Since then, she has competed in the Fitness America Pageant, Women’s Tri-Fitness, NPC, and now IFBB, at which she has taken first at the 2011 Arnold Europe Classic.