Everything has a point of origin and has to come from somewhere. Such is the case with bodybuilding. Long before the Golden Era, bodybuilding was going strong, but it was still somewhat in its primitive stages. 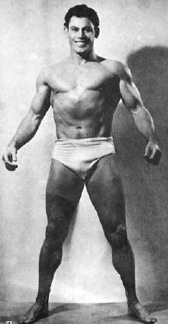 Bodybuilders were looked at as being narcistic and not very bright. It was assumed that they spent hours looking in the mirror and not holding down a full-time job. The public perception was that they were obsessed with their bodies and nothing else. Back then, bodybuilding wasn’t a sustainable job and most bodybuilders had to have a second job to pay their bills. Many of them did studio work for the movies as grips and extras, allowing them time to train.

Bert Goodrich was the first AAU Mr. America in 1937. He had a string of gyms in Hollywood that were more like fitness spas, but his title and publicity at the time brought a lot of people in to train. He was married to Vic Tanny’s sister and his gyms later morphed into the famed Tanny gyms credited with inventing the modern health club. Vic’s brother Armand was also a Mr. America and received a lot of publicity in the early muscle magazines. In later years he became a writer for many of them.

Also in 1937, Charles Atlas came on the scene with cartoonish magazine ads of a bully kicking sand into a skinny guy’s face on the beach. It advertised his training course, which skinny guys could follow only to make a victorious comeback, defend themselves against bullies, and score a hot lady to top it off.

The concept was actually based on Atlas’ real life experiences. These ads were written in such a way that you had no choice other than to send for the training course. Everyone wanted to be a man of steel.

It was the beginning of the Pre Golden Era of Bodybuilding. It’s the era, which has never been exposed to the public. As we moved into the 1940s, Muscle Beach became popular among the bodybuilders. It gave them an outdoor platform to work out and get spectators. It wasn’t only bodybuilding but lifting, gymnastics, hand balancing, and strength events such as  bending rods of steel with bare hands, driving spikes into wood, and ripping phone books in half. This was a lifestyle for many of them and it was a luxury of life for most. 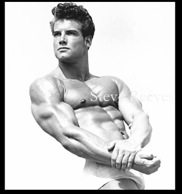 Steve Reeves came onto the scene to become the “Arnold” of that era. He played the role of Hercules in films and became a household name. Reeves was bigger than life and and was known for his amazing calves. It was rumored that he built his calves riding a bike up and down the hills in San Francisco as a kid on his newspaper route. 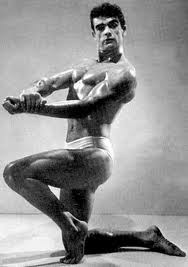 Training was a different style back then as opposed to today’s methods. Most only trained three days a week doing full-body workouts every Monday, Wednesday and Friday. The gym would be open for women on Tuesday, Thursday and Saturdays. However, great physiques were built on this schedule and the diet was as basic as meat, eggs, cheese and milk.

Men trained hard for their gains and did a lot of power lifting. Drugs weren’t even known back then as trainers worked hard for each inch of muscle. Training was basically about health. Think about how great these guys looked and trained naturally. It had to be that way because there were no drugs being used.

There were beach contests on the weekends in Santa Monica. These bodybuilding contests drew large crowds and consisted of a men’s, women’s, and strength contest, as well as a gymnastic show. It wasn’t taken as seriously as today’s shows, and was mainly done for fun. In addition, bodybuilding wasn’t seasonal as it is today. It was year round, and people still couldn’t get enough. 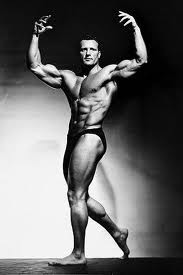 These men stayed in shape 24/7 and were much healthier as training was designed for health, not just show. Beaches were jammed. This was a family event and a place to cool off during the hot summers in the city. Two piers were there, the Santa Monica fishing pier and Ocean Park Amusement pier, so you had choices of laying on the beach, watching the contests or just hanging out on the pier.

Some of the greats that trained at the beach included Hugo Labra, Gordon Scott (Tarzan), Dick Dubois, Steve Reeves, Clancy Ross, Joe Gold and Zabo to name a few.

In the early 60s there was a concern with Santa Monica Muscle Beach attracting a bad element, so it was decided to take it off the beach. Many moved into the Dungeon up on 4th street to train in the basement. The equipment was then moved to the parking area in the Surf Rider Hotel across the street. The beach was never the same without it, but in 1965 Joe Gold built his gym and Muscle Beach was moved to Venice. The Pre Golden Era will continue with back stories on these great bodybuilders, along with their training methods, diets, supplements and determination to suceed through hard work.

Can Red Light Therapy Be the Recovery Tool You Need?

Find out if this non-invasive tool helps speed up recovery and improve health.

Who knew enjoying outdoor life and a great workout could be the same thing?

We've got you covered with these easy options.