after-party Soiree held in one of the many Las Vegas nightclubs after the Mr. Olympia finals. See “W.H.V.S.V.”

announcement Thrilling moment when the top two Mr. Olympia competitors are at center stage and the emcee declares the victor. See “next name you hear, the”

Bannout, Samir (aka “the Lion of Lebanon”) Seventh Mr. Olympia. Noted for his symmetry, Bannout won in 1983. In his 10 other O’s, he failed to place higher than fourth.

callout Prejudging grouping of, typically, two to six competitors, who step out of the lineup and go to center stage, where they strike the same poses so the judges can compare their strengths and weaknesses. See also “first callout” and “last callout.” 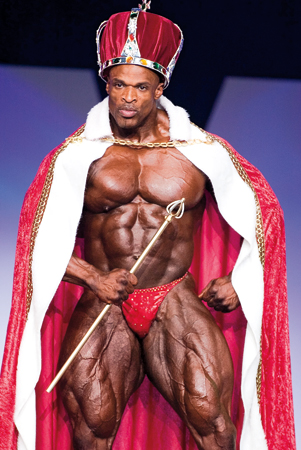 Columbu, Franco Fourth Mr. Olympia. Noted for his strength and thickness, the Sardinian Columbu won the 1976 O and returned from retirement to take his second Sandow in 1981. At 5’5″, he is the shortest Mr. Olympia in history.

Dickerson, Chris Sixth Mr. Olympia. After placing second the two previous years, Dickerson won the 1982 O at age 43. He is the oldest man to ever win the title.

DNP Did Not Place. Didn’t make the top 15 of the Mr. Olympia.

expo Trade show where the public can watch the women’s Olympia prejudging and the 212 Olympia Showdown prejudging, participate in the Muscle & Fitness model search, view numerous other events, meet champions, and sample products. This year’s expo is at the Las Vegas Convention Center on Sept. 28–29. See also “grazing.” 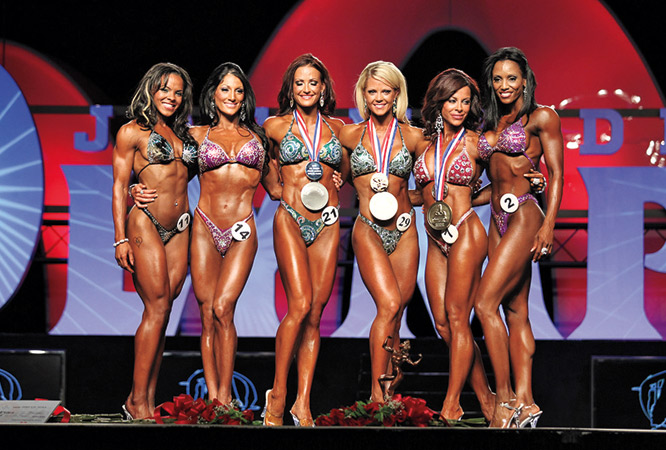 finals Second half of the judging and held separately from prejudging. It includes posing routines, the posedown, and the awards ceremony.

grazing 1. Slow movement and free consumption as performed by large mammals.
2. Act of wandering about the expo, sampling protein bars and drinks, and depositing free supplements, T-shirts, and other products into a big bag.

Haney, Lee Eighth Mr. Olympia. Noted for both overwhelming mass and a pleasing shape, Haney was only 24 when he won his first O, in 1984, and 31 when he won his record-setting eighth O in 1991 and retired.

“Holy #%$@” Exclamation uttered a dozen times over an Olympia Weekend by the typical spectator—as in, “Holy #%$@, look at Phil’s back!”

IFBB International Federation of Bodybuilders. All Olympia competitors are members of the IFBB Pro League.

Jackson, Dexter (aka “the Blade”) Twelfth Mr. Olympia. Noted for his consistent conditioning, Jackson entered nine O’s before he knocked off Jay Cutler and won the title in 2008. 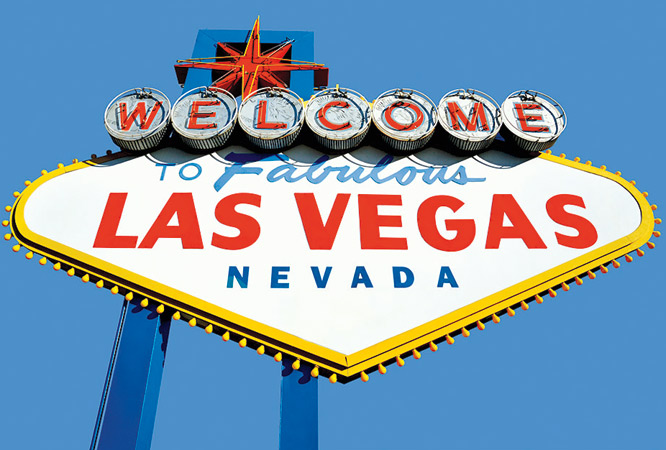 Las Vegas, NV aka “Sin City”) Home of the last 14 Olympias (counting this year), more than any other location. last callout Final comparison series of prejudging. It often consists of the presumptive top finishers (sometimes only the top two), thus heightening the contest’s drama.

lightweight era Period from 1976-1983 when four of the five Mr. Olympia winners—Columbu, Zane, Dickerson, Bannout—were under 200 pounds, and the fifth winner was a lighter-than-usual Schwarzenegger. No Mr. O has weighed less than 235 since then.

money spot Top 10 Mr. Olympia places. Even the 10th-place finisher is awarded more than the winner of most IFBB pro contests.

“next name you hear, the” Trademark phrase emcee Bob Cicherillo announces just before revealing the Olympia victor and when only the top two remain onstage. Thus, first place is announced before second place. Ex.: “Ladies and gentlemen, the next name you hear will be the Mr. Olympia winner…”

O 1. Fifteenth letter of the alphabet.
2. Popular abbreviation for Olympia, usually preceded by “the.”

old days, the 1. Time when things were purportedly better.
2. The Olympias of a bodybuilding fan’s formative years. Ex.: “Things were so much better when [insert name of favorite Mr. Olympia] was on top.”

Olympia 212 Showdown contest for qualified male competitors weighing 212 pounds or less. This is the inaugural year for the 212 division, which replaced the 202 class. The Olympia 202 Showdown was held from 2008 to 2011.

Orleans Arena The 8,900-seat auditorium of the Orleans Hotel & Casino, Las Vegas, NV. The last eight Olympias (counting this year) have been held at the Orleans Arena, more than any other venue.

posedown Period when the top competitors pose with one another in an unscored, free-for-all format.

prejudging First half of the judging, held separately from the finals. It includes each competitor striking poses alone and in callout comparisons with others.

qualify To become eligible to compete in the Olympia. IFBB professionals must travel one of these routes:
a. finish in the top four of the previous Olympia, top three of that year’s Arnold Classic/International or top two of the New York Pro;
b. win an IFBB pro contest after the previous Olympia;
c. accumulate enough points by placing high in IFBB pro contests. The top-five highest point scores each season qualify for the O.

“quarter turn to the right” Constant refrain of the head judge during semi-relaxed comparisons. Competitors rotate 90 degrees after each command.

routine 1. System of exercises, sets, and reps for building muscles.
2. Display of those muscles in individualized poses to music.

Sandow 1. First bodybuilder to achieve great fame for his muscles. Eugen Sandow (1867–1925) is known as the “Father of Bodybuilding.”
2. Mr. Olympia trophy, a bronzed sculpture of Eugen Sandow holding a kettlebar.

Sandow Society, the Unofficial and very exclusive “club” made up of only the 13 Mr. Olympia winners. See “legend.”

Schwarzenegger, Arnold (aka “the Austrian Oak”) Third Mr. Olympia. Schwarzenegger was only 23 when he won the 1970 Olympia, still the record for youngest Mr. O. At 6’2″, he is also the tallest victor. He won six times in a row, raising the public profile of bodybuilding, and then retired at only 28 after his victory at the ’75 Mr. O (made famous in Pumping Iron). He returned in ’80 to win his seventh O.

September Month in which most Olympias have been held. This year, the Joe Weider Olympia Fitness and Performance Weekend occurs on Sept. 27–30.

top four One of the four highest placings at the Mr. Olympia. These finishes qualify a competitor for the following year’s Mr. O. See “qualify.” 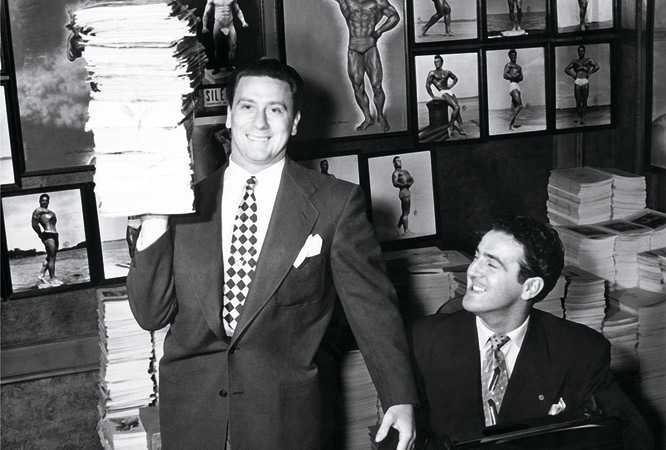 Weider, Joe (aka “the Master Blaster”) Pioneering publisher of bodybuilding and fitness magazines, manufacturer of exercise equipment and nutritional supplements, and co-founder (with his brother Ben) of the International Federation of Bodybuilders (IFBB). Joe Weider created the Mr. Olympia contest in 1965 and the Ms. Olympia contest in 1980.

W.H.V.S.V. What Happens in Vegas Stays in Vegas. See “after-party.”

Yates, Dorian (aka “the Shadow”) Ninth Mr. Olympia. In 1992, Englishman Yates earned the first of his six consecutive O victories. Yates, who competed at 5’10” and 266, set new size standards in the mid ’90s.

Are You Training Hard Enough? Here’s How to Tell

6 Sweat Facts Every Athlete Should Know

Ever wonder why you sweat in the first place or whether you can sweat less? Read on.

How to Identify and Treat a Winged Scapula

This common condition won’t help you fly, but rather hold back your gains—until now.

5 Reasons to Download the New — And Free! — Gatorade Gx App