Hasaan Hawthorne’s wrestling journey came full circle after a 7-3 victory on a wrestling mat in Huntsville, AL. The soft-spoken Hawthorne, 18, grappled his way to a perfect 37-0 record as a senior at Pelham High School, winning the Class 6A, 145-pound AHSAA State Wrestling Championship.

Even more impressive—he did it with no legs.

SEE ALSO: Double Amputee Flexes His Muscle In The Weightroom

Hawthorne was born without shins as a result of a rare condition called tibial hemimelia. His parents had a decision to make: have their son’s legs severed at the knees or subject him to multiple invasive surgeries and a risk of being wheelchair bound. When Hawthorne was 4 months old, his parents made their choice.

“We decided to have his legs amputated after a lot  of thinking, second  opinions, and research,” explains Hawthorne’s mother, Felecia. Equipped with  prosthetic legs,  Hawthorne developed a  love of sports and competition early on—as well as a disdain for losing. 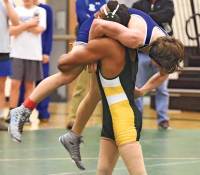 “He’d race in everything,” says his father, Demond. “Everything was a competition.” Hawthorne played football and baseball, swam, and ran track, but discovering wrestling in the sixth grade was a game changer.

“He fell in love with the physical nature of it and said, ‘I think this can be my sport, where I’m competitive for a long time and really compete against able-bodied people,’” Demond recalls.

Wrestling prep typically involves a lot of running and cardio work, which Hawthorne admits created an issue. To keep his wind up he would drill, spar, and hit the weights while his teammates ran stairs. Although Hawthorne’s efforts to excel were lauded by most, he wasn’t spared from haters. “In one particular situation,” Demond remembers, “one of the parents or coaches was saying he was a one-trick pony and could only do one particular move, and that really fueled him, so he took it out on the kid.”

SEE ALSO: Woman With No Legs Competes In Bodybuilding Competition

The doubters were put to rest as the W’s continued to pile up, and it became clear that Hawthorne was the real deal. As his whirlwind season came to an epic conclusion, the low-key teen continued to remain humble, motivated, and hesitant to boast about his accomplishments. However, he did acknowledge how gratifying winning the title was—especially after battling back from a pair of shoulder surgeries the summer before his senior season. Pre-surgery, his one-rep max on the bench press was upward of 240 pounds.

“I just have a God-given ability and the strength that He already blessed me with,” Hawthorne says. “All we’re doing is just adding on to that. And trying to get better every day.”

Sleep Right to Prevent Back and Neck Pain

Give more thought to the way you sleep.

Relieve Back Pain in Quarantine

Combat stiffness and pain with these tips and stretches.

How To Build Your Own Home Gym

It may be a good time to start looking into creating your own iron paradise.