Throughout her 20s, Ana Delia was forced to deal with a string of devastating losses— none of which involved coming up short on a judge’s scorecard. She lost her father to cancer, a cousin to murder, a brother-in-law to a drunk-driving collision, and a younger brother to complications from a motorcycle accident. The emotional roller coaster was a bumpy ride that led her into a debilitating depression.

"There were times I felt like giving up," Delia reveals. “Slowly I’d start to recover, and then something else would happen. I’d think, ‘How much more can I take?’ But I’d make myself get up, brush myself off, and keep going.” One particularly heart-wrenching episode took place shortly before her brother’s passing. “I was traveling to Miami, and he came to visit me the day I was leaving. The last thing he said to me was, ‘Take me with you.’ I wish I could have.” Delia, now in her mid-30s, can’t forget the heartache and bouts of depression that plagued her a decade earlier. But her dedication to fitness and a mindset to seek the bright side in even the most demanding circumstances helped her prevail. “Everything that happens—every little step that’s put in front of us—can teach us something,” she says. “Challenges will never stop coming, and life will never stop hitting, so it’s up to us to turn the other cheek and say, ‘Bring it!’ ”

“My father’s love for me knew no bounds, but his bipolar disorder would often cause erratic behavior,” she says. “Sometimes I would sleep with a knife under my pillow because I wasn’t sure if or when his anger would get the best of him.” The two grew closer once he found inner peace through religion. “I never stopped loving him, and a lot of who I am today I owe to his example,” Delia says. “He turned his life around, and that taught me that I could do it, too.”

Delia competed in her first NPC show in 2011, earned top honors at the 2012 FLEX Bikini Model Search, and scored her pro card at the 2013 NPC Team Universe. “Competing helped get me out of my depression,” she says. “I started to make friends and have a sense of accomplishment. I was happy. The gym became my church. Even now, when I feel troubled, I say my prayers while I train.” 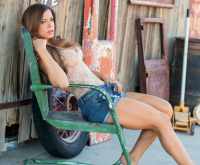 Delia took a break from the IFBB stage in 2014 and might continue the hiatus to focus on building her business and brand. That said, there has been no letup in her training regimen. “I hustle when I’m in the gym in order to get my heart rate up and to burn more calories,” she says. “I’m training to build strength in all areas, but I think sometimes it’s harder to bring down a big Latina booty than to build a small booty up. Some women are just naturally gifted with great symmetry and tighter physiques. But just because Latina women like me tend to be bottom heavy doesn’t mean we can’t make it work for us.”

Delia’s goals as a bikini pro and fitness model aren’t simply to rack up awards or accumulate hordes of adoring fans. The bigger picture, she hopes, involves inspiring others to strive to succeed. “When you are good on the inside, people will want to be around you,” she says. “No matter how bad things are, it’s up to you to keep going. I’d like to use that line of thinking to benefit others.” – FLEX