I was born in a small village in northern Iraq called Telkaif. I later moved to Jordan when I was 11 years old and lived there for three years and that’s when my passion for bodybuilding began. My father was my motivation. When he was younger he wanted to become a bodybuilder but his situation and resources did not allow him to. Bodybuilding became a dream my father and I shared. I later moved to the United States when I was about 15 years old, this is when I really got into bodybuilding. 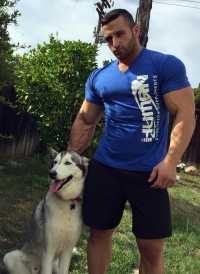 When first living in the United States I did not have the finances to support my bodybuilding goals, I would train long hours at home, and worked extra hours until I would finally be able to afford a gym membership. I was at the gym many late nights because my job restricted me from training in the day, but I did not let it limit me from training. The gym was open 24 hours a day which worked for me. I work out six days a week, I try my best to keep an organized routine.

My diet is an important part of my workout, I also take lots of nutrients to keep my body prime. My body is something I’ve learned to cherish and respect and I do what I can to maintain a healthy and defined physique. I entered my first competition at age 17 it was the NPC Border State competition, although I didn’t win it gave me experience in the competitive field. I would return the next year and compete again to receive fifth place in open men lightweight and fifth place in novice men lightweight.

That same year I competed in Musclemania California and placed first in both junior and middleweight division, and placed second overall. My next competition was 2011 Musclemania Worlds in Las Vegas, where I competed among six hundred bodybuilders and placed fourth in the middleweight division. Besides my goals as a bodybuilder I also aspire to become an actor. Arnold Schwarzenegger is my role model. Against all odds he reached his goals as a body builder and an actor; he made his mark and I too hope to leave my mark.

Many told me that I could not achieve my goal and was wasting my time. Little did they know this would only motivate me more. Blood, sweat and tears brought me to where I am today. I am happy at where I stand and hope with the support of my family, friends and Human Evolution, to succeed in all my future endeavors. I have the heart of a lion, and nothing can break me down. 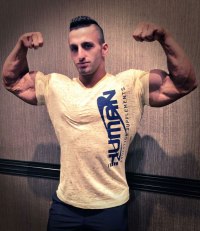