In the fast-food game since 1964, Arby’s is known for its simple roast beef sandwich and dedication to providing a whole barnyard’s worth of meats on its menu—beef, pork, turkey, and chicken. Though none of the items are going to win any awards for nutrition or clean eating, most of the sandwiches are generally solid choices without going too crazy in the calorie or fat departments. Arby’s does offer two salads with decent protein amounts of about 25 grams, but you don’t go there to graze on lettuce.

The stars here are the roast beef items, which are just meat and a bun. Roast beef is probably one of the best deli meats you can select if you’ve gotta go that way, as it’s lean, low in sodium, and gives you about 7 grams of protein per slice. Arby’s offers three sizes—Classic, Mid, and Max—so if you want to bump up the protein without adding too many calories or fat and almost no carbs, order the Roast Beef Max at 560 calories and 45 grams of protein.

Arby’s also has quite a few different styles of turkey sandwich—another deli standout, with around 6 grams of protein per slice—from wraps and sliced-bread stacks to salads and fully loaded, bacon-and-cheesed- up limited-time offers. Chicken offers no quarter here, as all of the selections are fried, unfortunately. 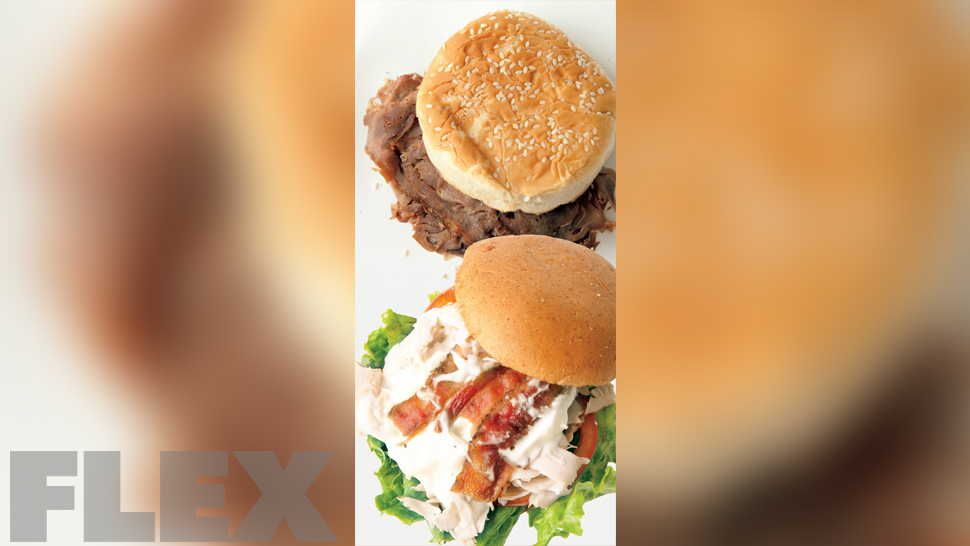 Look for foods with protein for sustained energy and some complex carbs to fuel muscle. Stay away from fat- and calorie-heavy foods.

After an intense workout you need to build your glycogen stores back up with carbs and lean protein to jump-start muscle-tissue repair and the building of new proteins.

Some items that appear harmless are actually fat and calorie bombs. Steer clear: