After pouring your sweat and energy into the gym, you’re still not seeing any hard-earned results. What you could be lacking is a strategic supplement plan, one that works synergistically to produce greater muscle gains. It’s a reason as to why MuscleTech developed a supp stack called the “Trilogy.” The “Trilogy” contains supps—Clear Muscle, Phospha Muscle, and Plasma Muscle—that work to activate the mammalian target of rapamycin (mTOR) pathway via various mechanisms. The mTOR pathway governs muscle protein synthesis.

The CLEAR MUSCLE formula is the first to contain BetaTOR, and is only available from MuscleTech in a clear liquid pill.

The supp also works by shutting down the activity of the ubiquitin-proteosome-proteolytic pathway (UPP). By inhibiting this pathway, Clear Muscle decreases the muscle protein breakdown at a molecular level, caused from an intense training session. The Journal of Physiology published a study in 2013 indicating the ingredient, BetaTOR, can reduce protein breakdown by 57 percent.

BetaTOR was put the test at the University of Tampa, where a group of participants were given the ingredient. The study encompassed eight weeks (phase 1) of nonlinear periodized resistance-training, two weeks (phase 2) of an overreaching cycle, and two weeks (phase 3) of a taper. The European Journal of Applied Physiology published the results: participants who supplemented with BetaTOR gained 16.3 pounds of muscle in 12 weeks. Also participants had an overall increased strength by over 170 pounds from the initial testing. 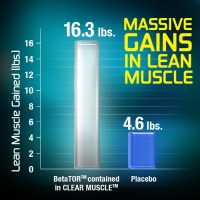 PHOSPHA MUSCLE delivers the purest form of phosphatidic acid to boost these effects and give you the size and strength you want!

Phospha Muscle powers the mTOR pathway through phosphaticdic acid (Mediator ingredient), which is a signaling lipid. For starters, when you lift a heavy load, your muscle fibers receive that mechanical stimulus — triggering the release of phosphatidic acid. From there, the lipid binds to mTOR and activates mTOR complex 1, which causes the growth and repair of muscle. The more phosphaticdic acid that’s present, the more amplified effect it has on protein synthesis.

At the University of Tampa, participants supplementing with Mediator packed on 5.3 pounds of muscle in eight weeks. These participants also increased their strength on the leg press by 60 percent.

Featuring a never-before-seen combination of Peak ATP and optiNOs, Plasma Muscle is a serious musclebuilder for hardcore athletes looking for only the most cutting-edge performance enhancement and muscle growth. It provides the most extreme muscle-building pumps you’ve ever experienced along with lean muscle gains!

The last of the “Trilogy” stack is Plasma Muscle, another mTOR activating supp through two leading ingredients — Peak ATP and optiNOs. Peak ATP increases anabolic signaling while reducing skeletal muscle calcium influx and release — leading to an improved muscle contraction. This key ingredient also supports vasodilation for a better blood flow, which delivers more oxygen and nutrients to your muscles.

OptiNOs is a patent blend of three ingredients — Cissus, Curcuma, and Ajowan Extract — each working via multiple mechanisms. One of the mechanisms includes an elevated nitric oxide production in endothelial cells by activating Nitric Oxide synthase (eNOs). More nutrients and oxygen get delivered to the muscles while the body rids itself of metabolic waste.

The University of Tampa conducted a 12-week clinical study to determine the effectiveness of Peak ATP. Results demonstrated that participants increased their total strength on the bench press, squat, and deadlift by 121.9 pounds. In addition to gaining strength, they also gained 8.8 pounds of lean muscle.

The second powerful ingredient — optiNOs — was tested in a double-blind placebo controlled study. Results: there was enhanced muscle endurance — participants were able to push out four times more reps on the leg extension.

The studies have been done on each supp, but are the supps just as effective when they're taken together? Once again, the University of Tampa completed the study over 12 weeks where trained athletes took the key ingredients in Clear Muscle (BetaTOR) and Plasma Muscle (Peak ATP). An intense training program was designed by Dr. Jacob Wilson. The results were staggering — particpants gained 18.7 pounds of lean muscle within the 12 weeks. That's almost 1.6 pounds of muscle each week. They also got significantly stronger, adding almost 212 pounds to their best bench, deadlift, and squat total.

This article is sponsored by MuscleTech. For more on MuscleTech, visit www.muscletech.com.

These statements have not been evaluated by the Food and Drug Administration. Products are not intended to diagnose, treat, cure, or prevent any disease.

RETURN TO SCIENCE BEHIND THE SUPPS: PERFORMANCE SERIES >>