Part of the threat that Greene brings to the competitive bodybuilding stage, is the collection of outrageous, outsize body parts he’s melded onto his frame over the years. The whole assemblage rests on a set of the most massive legs in the IFBB pro ranks. Greene’s lower body is starting to resemble something akin to that cow missing the myostatin gene, though with much better balance than the bovine. Greene’s legs have long been standouts; they were talking points even when he was placing 14th in the NY Pro after turning pro by taking the overall at the 2004 NPC Team Universe.

Greene trains almost completely by instinct and how he feels when he walks into the gym. This level of intuition makes it difficult for an outside observer to make heads or tails of Greene’s training. For instance, if you want to know how Greene trains legs, you can follow him through a workout in the gym one week, then follow him through a completely diferent type of leg workout the next.

How Greene feels will dictate the exercises he uses, his set and rep ranges, and the rest he allows himself between sets. Understandably, this makes it difficult to list any exercises, sets, and reps or even a training split because there are rarely any prescribed workouts and even when he goes into the gym with one in mind it’s up for grabs whether that workout will materialize or be sidelined by an on-the-spot change in plans. That said, Greene admits he trains legs once a week and if it’s a week with travel involved, he’ll look to train them at the beginning of the week “because it’s not comfortable sitting on the plane with your legs sore or cramping up.”

HIS BODY SAYS: TODAY IT'S LEGS

So, Greene comes into the gym and something clicks—he knows he needs to train legs. He’ll get on the StairMaster and start warming up. “It’s not cardio,” says Greene. “It’s a warmup. It gives you a chance to check in with yourself mentally. To fgure out how you’re doing and what you’re doing.” Greene hunches over the machine, flexing his glutes, hams, and quads as he steps, already getting the blood flowing.

A lot of people have great quads or hams or exceptional calves,” this two-time Arnold Classic and two-time New York Pro champ points out. “Try to put that together, though, and have an exceptional lower body—that takes a lot of thought, a lot of work, a lot of seasoning. None of this, ‘yeah, I’m-a-go-do-four-sets-of-squats.’ ” Greene has a repertoire of exercises and how he performs them. He smiles as he says, “You don’t train for 20 years without learning a few tricks.”

Again, to an outside observer it’s going to look like a mishmash, a mix-and-match of exercises and how they’re performed, because Greene will employ whatever it is he feels is necessary to shock his legs into continued growth.

A lot of guys like to do this exercise first when they’re training quads to warm up. It isn’t always Greene’s first movement for his thighs. Wherever they fall in his routine, Greene will fully extend his legs with his butt up off the angled seat. He’ll change up the direction his toes point—outward, inward, straight ahead—to better target dif erent parts of his quads. 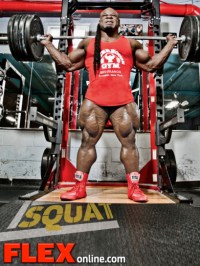 Squats have helped Greene build one of the largest pairs of thighs in the IFBB. Greene changes up his foot placement from workout to workout. Often you’ll see him with his legs shoulder-width apart, toes pointed out to hit his thigh sweep. The bar rests high on his shoulders. Greene carries so much mass it looks like his thighs are cushioning his torso as he lowers into the squat. At the top of the movement he visibly flexes his glutes and hams. Greene will sometimes incorporate the Weider Rest-Pause Principle to eke out extra intensity. Greene always squats to at least parallel; he’ll go even lower when he’s targeting his hams and glutes. Sometimes he wraps his knees, other times he doesn’t.

People don’t always appreciate how strong Greene is, in part because he doesn’t make a big deal of it himself. He was given early nicknames—Bob Fuchs christened him Baby Bertil (aﬅer Bertil Fox, one of the strongest and most densely muscled IFBB pros of the ’70s and early ’80s); Steve Weinberger tagged him Baby Moose—speaking not just to his size but his strength. You can find videos online of Greene squatting six plates for reps, incline pressing five plates, and repping four plates on the seated military press.

When Greene was younger, he thought moving a lot of weight was the most important thing. As he got more years under his belt, he came to understand what kind of injuries waited around the corner when the envelope was pushed poundage-wise. At the same time, he developed and refined a strong mind-muscle link that allows him to use what might have once been “light” weights (still heavy to the rest of us) to get the feel he is aﬅer in the muscle trained. “The weights you’re using are an important indicator,” Greene explains, “but what are they indicative of? Progress. That said, you’ve got to remember that no one continues getting stronger indefinitely. Eventually injuries will occur. There are other ways of increasing the intensity without constantly increasing the weight.” 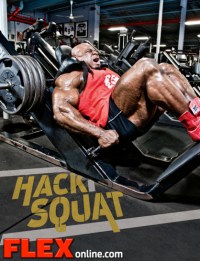 Again, depending on the feeling he is going for, Greene will place his feet higher or lower on the platform. His foot spacing also depends on the part of the thighs he wishes to stimulate or the machine he’s using. Invariably, he squats deep and wants to feel like “my quads are jumping of the bone.” With all his quad exercises, Greene’s aim is to pump as much blood into his thighs as he can; he pictures them as “bags of blood waiting to burst.” 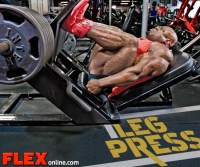 As with every other quad exercise he does, Greene changes up the placement and spacing of his feet on the platform. He brings his quads back to either side of his chest for a deep contraction before pressing them out to a near lockout, keeping continuous tension on the muscles. 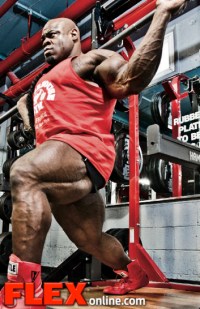 Greene can prioritize his quads or his hams and glutes with lunges. “It’s a no-brainer that with these your quads are going to work,” he says. “The challenge is to work your hams and glutes.” He’ll lunge in place or walking, concentrating on the glute ham tie in. At the top of the movement, Greene raises up onto the ball of his foot and actually flexes his hamstring as he would hitting a back pose onstage. His back leg serves merely to anchor and balance his body.

EVERYTHING ZEN: VISUALIZATION DURING TRAINING

Years ago, Greene would visualize the legs of Victor Richards or Bernard Sealy or the separation way up into the hips of a Renel Janvier or Thierry Pastel. These days Greene is focusing on the muscle—be it the quad’s rectus femoris or his hamstrings or the calf’s gastrocnemius. He’s so “in the zone” he’s reached a state of near-meditative Zen where there is nothing but a pure mind-muscle connection: the muscle moving through its range of motion, blood coursing through his veins and capillaries, lactic acid suff using the muscle belly. 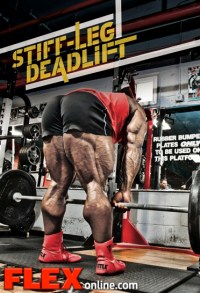 Greene will perform these on a platform or of the foor. He starts flexing his hams and glutes on the descent, digging his heels in while he opens his feet up by turning his toes outward. He’ll bring the bar at least to his upper shin (other times lower) and doesn’t break his knees.

Greene lowers his pelvis onto the angled pad so he can bring the padded roller at the bottom of his calves up to the top of his hams (not his glutes). His thighs actually rise up off the pad during the exercise, his hamstrings popping off the back of his leg to meet the padded roller. It looks like a preacher curl if your triceps come up of the pad and perfectly illustrates why the hamstrings are known as leg biceps. 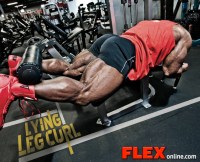 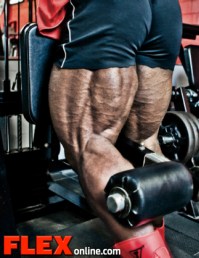 Greene curls his lower leg up parallel to the ground, his hamstring popping of the back of his leg. These reps are relatively fast and choppy, but he’s in control, pumping blood into the muscle belly.

Greene explains: “If I’m going for 15–20 reps but after 7 I’m feeling it the way I need to feel it in the muscle, I’ll stop the set. Sometimes I don’t count reps. Other times I count while my coach or training partner counts and we come up with different counts!” Greene will admit he’s a volume trainer when it comes to his sets and reps and the number of exercises he employs to train legs.

Greene makes sure his heels go below his toes for a full stretch on the bottom of this movement. He’ll pump out 20 reps, incorporating some partial reps toward the end of the set to fully fire his gastrocnemius. At different times, he’ll do these on a toe press machine or leg press.

His form is similar to that of his toe presses, heels lowering below his toes for a crazy stretch in the back of his lower legs. Sometimes Greene will substitute donkey calf raises for this exercise. Other times he’ll do these and donkey calf raises. 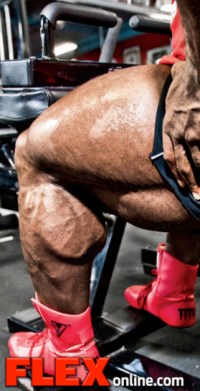 Greene is thinking of his lower leg in the side chest shot in this movement. “From the knee down,” he says. “That’s what this movement is.” He flexes his calf at the top of each rep, fully contracting it. The bottom part of his rep is similar to his other calf raises; he’s stretching his soleus muscle when his heels go beneath his toes. Often you’ll witness Greene doing these with his toes pointing slightly inward, heels out. Even with five or more plates loaded on the machine, Greene is feeling it in his calves and not just moving weight.

Greene wasn’t disappointed in placing second at the Olympia. He understands that at this level of the sport, comparing a bodybuilder like himself with Heath is similar to comparing a Dali with a Rembrandt. Greene speaks of “a state of gratitude, gratitude for being able to compete in the sport I love and for having the fans I do.” This is a man who came from literally nothing, and now he’s something. Something big. “Dreams do still come true,” Greene grins. “And if you don’t have a dream,” he wants everyone reading this to know, “you need to go out and get one now.”

Note: There’s nothing “typical” about Kai or his training, which changes from week to week and workout to workout.