It’s hot. Triple-digit hot. Desert hot. That’s the forecast most every summer day in Kuwait City. Though it’s comfortably cool in Oxygen Gym, Mamdouh “Big Ramy” Elssbiay brings the heat to his back workout, grinding out set after set, hoisting 315-pound barbell rows and repping out fiveplate partial deads, making additions to what are already two of the largest lats the world has ever known.

This year, Elssbiay worked with trainer Ahmad Alaqi, who brought a progressive component to training days. “For the chest, back, shoulders, and legs, we vary the rep range from 15 to 6,” Alaqi explains. “Each week, we decrease the number of reps. So we start Week 1 with sets of 15 reps. Next week we go to 12 reps. The week after, 10, then eight, and finally six. And then we go back to 15 and start over again.” As the reps go lower, the weights grow bigger over the five-week progression. (For arms, the reps stay in the 10-to-15 range with an emphasis on maximizing pumps.)

The day FLEX watched Elssbiay work back under Alaqi’s supervision in Oxygen Gym was a Week 3, 10-rep session. This means 10 was the target for every working set, though sometimes Big Ramy grinded out an extra rep or two with Alaqi’s helping hands. Trainer and trainee rarely spoke. During the last two exercises, when intensity was at risk of waning, the phenom who has won all three of his non-Olympia shows clamped his red Beats headphones onto his hears, and hip-hop drove him through the toughest reps as his face contorted with pain. Mamdouh Elssbiay already has the world’s widest back. But in workouts like the one we observed, he’s attacking that back with a diversity of exercises and angles, all designed to accentuate the plateaus and canyons of his dorsal landscape.

FORM: After two light warmup sets of wide-grip front pulldowns at a pulldown station, Ramy moves to the Hammer Strength machine. He stays upright with his abdomen against the support pad for most of each rep, but he leans back slightly near the end. His emphasis is on full ranges of motion with maximum stretches and contractions.

FOCUS: With this machine, Elssbiay’s pinkies go from 14 inches apart at stretches to 22 inches apart at contractions, so he’s pulling his elbows not just down but also from in front of his body to his sides and from closer together to farther apart. Thus, he activates different back muscle functions. “I focus on pulling my elbows back as far as possible to feel it in the inner back,” he says. His trainer assists with forced reps on his final set.

GRIP: Parallel, holding the lever bars near their bottoms (just above where the handles attach)

FORM: Since the handles aren’t used, it’s as if his arms and the machine’s arms are one and the same, with his elbows functioning as the only hinges. His abdomen never moves from the support pad as he does each rep. He attains a full stretch and contraction each time.

FOCUS: With the lever mechanics of this machine, rows are pulled in a downward arc and then slightly upward at contractions. This, coupled with his pulling his elbows back as far as possible, focuses more on his lower lats. Gripping the lever bars instead of the handles also allows him to get his elbows farther back at contractions. 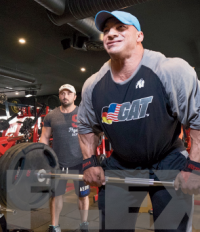 GRIP: Overhand with straps, thumbs at inner edge of knurling

FORM He cinches up his training belt before each set. Taking a relatively narrow grip for someone so wide, Big Ramy stays mostly upright with his upper body at an angle approximating the minute hand at 10 o’clock. He pulls the bar up, grazing the sweatpants covering his colossal quads, and into his waist.

FOCUS: This year’s Arnold Classic Brazil champ watches himself in a mirror throughout each set. With his mostly upright positioning, he targets his upper, inner back (lower traps). And 315-pound rows are excellent for overall dorsal thickness. The two D’s, density and detailing, were Big Ramy’s emphasis on back days in 2015. 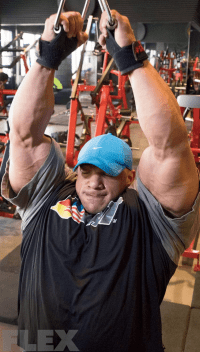 FORM: The secret to this V-handle pulldown is that it’s actually performed with two D-handles (both attached to the same snap link at the end of an overhead cable), which creates a collapsible and expandable V-handle. At the stretch of each rep (arms straight up), Ramy’s palms are nearly together. As he pulls down, he moves the handles apart, so at each contraction the handles are as separated as possible. The D-handles go from nearly perpendicular to the floor at the start to nearly parallel to his chest at the bottom. He also leans backward slightly throughout the concentric half of each rep.

FOCUS: Two D-handles give him greater mobility than a V-handle, and this allows him to expand his range of motion, getting longer stretches at the top of reps and stronger contractions with his elbows pulled farther back at the bottom of reps. It may seem minor, but these little tweaks can make a big difference when multiplied by reps and sets and workouts. “I like the freer motion on every rep and the better squeeze at the bottom of reps,” Elssbiay says of the twin D-handles. 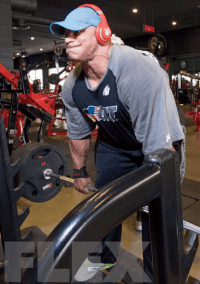 FORM: After a warmup set with 315 to set his range of motion, Big Ramy proceeds to five plates. He wears a belt. Because each set is launched by taking the weight from a rack, he starts from the top position (body straight). He then lowers the bar to his knees, which have unlocked only a little, and pulls the bar back up to lock out again. This is similar to a rack pull, but he’s not lifting the bar off the support bars of a power rack each time. Instead, it’s his responsibility to stop the bar’s descent before pulling it up again.

FOCUS: By doing only the top halves of deadlifts, Elssbiay eliminates most of the leg and glute activation that occurs on reps pulled from the floor. Therefore, this becomes more of a back exercise (hitting especially the spinal erectors and traps) and less of a posterior chain exercise working the lower and upper body together. In addition, by doing top deads near the end of his back workout, he can focus them more on his pre-exhausted back and avoid using the monstrous weights he could pull at the beginning of his routine. Still, there is a risk of injury when handling nearly 500 pounds without support racks, so Ramy watches his form and range of motion in a mirror on every rep, concentrating on owning the weight and never letting the weight own him. 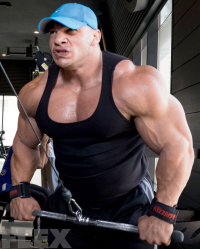 FORM: He stands six feet from the cable and bends his upper body forward at an angle approximating the minute hand at 9 o’clock. While keeping his enormous arms slightly bent but elbows locked, he pulls the bar down and toward him. His arms serve as levers as the bar goes in an arc from approximately the level of his blue Nike cap to touching his quads.

FOCUS: With the bar against his thighs, he holds each contraction for a second and squeezes his lats. “I really feel this in my outer lats,” Ramy says. “And it’s a good way to both stretch out and contract the lats at the end of a back workout. It always feels good to end with these. The weight isn’t so important. What’s important is strict form and really focusing on your lats.”