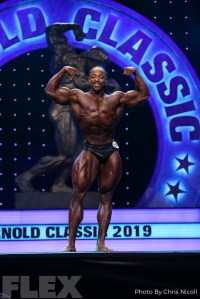 After winning the 1989 USA Championships, the 25-year-old Eddie Robinson exploded into the big league with a victory in his pro debut the following year. In retrospect, it was his peak. In 13 additional IFBB Pro League contests, this 5'8" Floridian never placed higher than fourth. He was only 34 when he retired.

Likewise, he racked up some staggering powerlifting marks while still young. We’re skeptical of the biggest numbers, but there’s a photo of him locking out an estimated 535 bench press while wearing just a T-shirt. That’s amazing when you consider he powerlifted in the 220-pound class when barely out of his teens. He left competitive benching behind after 1986 (the year he turned 22) to pursue bodybuilding, leaving us to wonder how much he could have benched if he’d continued to chase higher numbers for another decade or two. As it is, no pro bodybuilder has ever manhandled more weight at a younger age than Robinson.

Check back tomorrow for another workout from the 10 Strongest Bodybuilders!