I know you’re a proponent of forced reps, but I’m wondering if I should do them during every set. I’m currently training each bodypart with 10-16 sets.

It’s true that I am a proponent of forced reps and relied upon them heavily during my competitive bodybuilding career. However, not only do I feel using them for 10 sets per bodypart would be unwise, it would be counterproductive and dangerous.

Most people don’t understand what a forced rep truly is. To them, it’s having someone assist with a rep when they begin to tire at the end of a conventional set. To me, a forced rep is one that’s performed when you are so completely fatigued that you can’t possibly complete another without assistance. It comes only after the body fails, not merely when it’s tired.

This definition of a forced rep helps to illustrate how difficult, if not impossible, it would be to incorporate them into the number of sets you perform. In fact, I find that using so many sets, with or without forced reps, is nearly impossible if you are training at full intensity. 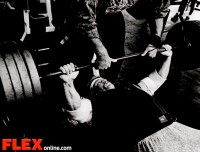 Here’s how it would work for chest. I liked to begin my chest routine with incline bench presses. First, I’d perform three warm-up sets, decreasing from 12 reps to eight. Then, it would be time for my working set. I’d aim to complete eight reps on my own, which meant pushing until I physically could not budge the weight another inch. Next, my partner would take just enough weight off the bar so that I could complete another two or three reps. Often, after feeling like I couldn’t even lift a pencil, my partner would assist me with negatives — he’d lift the weight and then let me lower it. I might also perform a rest-pause rep. After that working set, my pecs would be screaming for mercy, and I knew that attempting another such set would be pointless and likely to cause injury. There’s only so much the body can withstand, and I had just pushed it to its limit.

I definitely recommend including forced reps in your workout, but limit their usage — and be sure to have a reliable training partner. Otherwise, you could end up forcing yourself into an appointment with a physical therapist. – FLEX 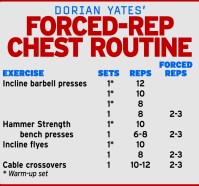