One Mr. Olympia record is likely to stand the test of time—greatest leap in standings. Gustavo Badell jumped 21 places from his first Olympia to his second. The Venezuelan-born Puerto Rican barely made a ripple during his first six professional years. In 17 contests, he made only one posedown. But that qualified him for the 2002 Olympia—where he got punked, 24th out of 25. When he next qualified, he placed a shocking third in the 2004 O. The following year, he repeated that bronze spot. Badell won only three lesser pro shows over his 38-contest, 15-year pro career, but his back-to-back Olympia thirds in 2004–05 mark bodybuilding’s most improbable upsurge. 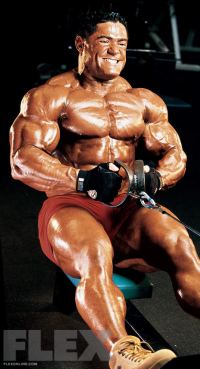 Just as Badell skyrocketed from oblivion to Olympia contender, his workouts were similarly unique for the distance traveled. For example, his back routine featured 32 working sets. Even going at a brisk pace, it took two hours to complete. He didn’t always use such marathon sessions. He increased his workload precontest, and he frequently alternated a high-set workout with a moderate-set one. But Badell does attribute this cranking up the volume for some of his stupendous midcareer success.

BADELL ON BACK TRAINING