Ronnie Coleman, Flex Wheeler, Kevin Levrone, Chris Cormier—they’re legends. But in the early ’90s, there was another name mentioned with them, another “can’t miss” future superstar. But, unlike that immortal quartet, Edgar Fletcher never made it to the IFBB Pro League. At 25, Pennsylvania’s Fletcher burst onto the scene, finishing second among heavyweights in the 1990 NPC Nationals (Coleman was third). He seemed destined for Olympia posedowns—once he turned pro.

He had all the tools. Before there was a super-heavy class, he lined up with heavyweights who were often more than a half-foot taller and over 30 pounds heavier. Nevertheless, the 5'6 1/2" Fletcher never appeared squat or small. He wore his 210 pounds like a stylish suit. His dramatic V taper, superb arms, and wispy waist combined for one of history’s best front double biceps poses. Never mind that he never struck it on a pro stage. 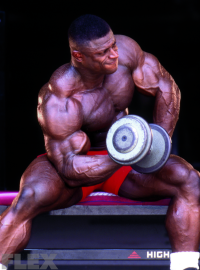 He just couldn’t peak on contest day. Also, with fewer pro cards given out then, there was a logjam of quality physiques at the top of the NPC heavyweight ranks. That said, none of his placings after 1990 would earn him the right to go pro today. All told, between 1990 and 2000, Fletcher entered 11 pro qualifers. He placed third in a heavy class five times and fourth twice, and those seven contests came consecutively between 1992–96. It was a frustrating string of almost-but-not-quite when he always had the best shape but never had enough fine details to nab a title. In retrospect, his initial Nationals runner-up spot in 1990 was his highwater mark. Edgar Fletcher will forever be remembered as the best bodybuilder from the ’90s who never made it to the big league. 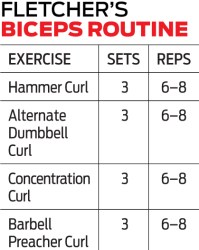