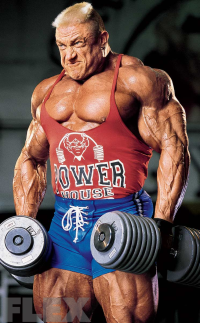 “I like being a freak. It’s a compliment when people go ‘ooh’ and ‘aah’ seeing my size.” So said Markus Rühl a few months before he finished fifth in the 2004 Mr. Olympia. Usually, those people weren’t saying, “Ooh.” They were saying, “Rüüühl!” The German Rühl was immensely popular with fans, if not judges, for his unabashed quest to cram as much mass as possible onto his wide, 5'10" frame. A late starter but fast riser, he didn’t begin serious workouts until he was a skinny 20-year-old, but five years later he flexed in his first pro contest.

Rühl won only two shows in his 14-year (1997–2010), 32-contest IFBB Pro League career, and that aforementioned fifth was his sole Olympia top-six finish in nine attempts. Still, for several years, he rivaled Ronnie Coleman and Jay Cutler for loudest crowd reaction whenever he crunched out his frighteningly colossal most muscular. In his final contests, Rühl was hampered by torn parts. But at his 280-pound peak, he was the dictionary definition of a mass monster. His physique wasn’t pretty, but for sheer, scary size, Rühl ranks as one of the best—and most popular—bodybuilders of all time.

“My traps also get hit with such exercises as upright rows, deadlifts, shoulder presses, and even squats.”

“Some people work traps with back, but I prefer to hit mine after delts.”