The first weight I ever picked up was my father’s 10-pound Healthways solid-iron dumbbell. I wasn’t more than 12 years old. Honestly, it felt like a ton. I couldn’t manage much with them and had no idea what I was doing. But soon, with the help of Joe Weider’s magazines, I got the hang of what I was supposed to be doing. Because, when anyone talked about muscles, it seemed like they ended up flexing their biceps. I quickly developed a penchant for arm curls. Fortunately, even though my form stunk and I cheated my ass of due to being bereft of any concept of strict execution, my biceps still responded. It seems I had arbitrarily stumbled on an easily stimulated body part. So I was hooked. Of course, with time, I quickly discovered that the rest of my body parts were not all blessed with the same responsiveness. I would have to work much harder on some areas of my body than others. It wasn’t until much later that I learned I wasn’t alone in my struggle.

It’s exquisitely rare that any bodybuilder finds that every muscle reacts to training with the same degree of growth response. The vast majority of even the greatest champions find that certain muscles respond much better than others. For the most famous former Mr. Olympia, Arnold Schwarzenegger, as great as his arms were, his hamstrings were devoid of even remotely similar development. At the other extreme, one of the lesser-known for- mer Mr. Olympia winners, Chris Dickerson, had impressively developed quads, hamstrings, and calves. But his arms were astonishingly unmentionable for a bodybuilder of that lofty a level. Even the freakiest of all former Mr. Olympias, Ronnie Coleman—who adorns the cover of the 3rd edition of my book, Extreme Muscle Enhancement—with all of the praise and adoration heaped upon him, no pundit has ever said they wanted his calves (which were, by comparison, mediocre at best). Yet in each of these cases of deficiencies, I can assure you that none were the result of a lack of training. I remember Tom Platz (recall he had the greatest quadriceps development in history) used to lament that, while he never had to worry about how he trained his massive legs, in sharp contrast, he had to keep after his arm training with exhaustive vigilance just to see even the smallest improvement. 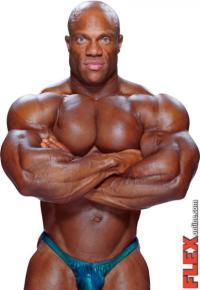 So why, despite the effort, do some muscles grow so much easier than others? The answer is complex. To begin with, unlike other cells in the body, muscle cells have more than one nuclei and are thus considered “multinucleated.” The nucleus of the cell contains the genetic material that controls the operations and function of the cell itself. So it governs what each individual cell does and how it does it. Since skeletal muscle cells are larger and more complex in terms of overt function than so many other cell types, it may explain the need for this multinucleation. In theory, the more nuclei within the cell, the greater the potential for more cell growth, and thus muscle size. Muscle nuclei are produced from other specialized cells called “satellite cells.” The more satellite cells surrounding the muscle fibers, the greater potential there is for production of nuclei. In fact, published clinical research tells us that people with more satellite cells build muscle more easily.

One such study from the Department of Physiology and Biophysics at the University of Alabama recruited 66 subjects and trained their quadriceps for 16 weeks with squats, leg presses, and leg extensions. Watching them carefully over the time course, they found that muscle-fiber size difered among the subjects. So the participants were divided into three groups:

Interestingly, and not surprisingly, the majority (32) of participants fell into the Moderate Responder group, which basically translates to most of us. Another 17 fell into the Non-Responder group (those hapless individuals that find picking up a weight is an absolute waste of time because nothing ever happens). Finally there were the other 17 in the Extreme Responder group. These represent the freaks among us who basically just breathe on a barbell and end up growing.

Strategies to expand our pool of satellite cells increase our ability to pack on muscle in response to training. We know that drugs like growth hormone and anabolic steroids augment this process. Of course, the abuse of these drugs when not given with medical necessity comes at a potentially steep price. Such gains are not sustainable for long without a frightful physical and financial sacrifice. The dietary supplement creatine has been shown in research to modestly influence this axis. Although power-stroke seems to be helped, there are almost negligible end results as far as muscle mass gains are concerned. Perhaps that’s why athletes still flock to creatine—yet it’s fallen way out of favor among bodybuilders, since they simply never saw the results. In truth, what’s taking us into the next generation of muscle growth are the myostatin inhibitors.

Myostatin is the quintessential key inhibitor of muscle growth. It’s what truly stands in the way of extreme development. It’s the hottest topic in muscle research in recent years. Uniquely, in the case of inhibition of myostatin, this approach is so powerful that, not only are the satellite cells stimulated and muscle fiber nuclei augmented but also muscle hypertrophy has actually been shown to precede satellite cell activation. In other words, the negative influence of myostatin is so profound that even modest down-regulation on this axis can produce staggering muscle gains. Research is revealing that the essence of muscle growth is not so much pushing the anabolic axis, as has been done for years, but rather, it’s about countering forces that get in the way. As such, myo- statin has been identified as the key culprit and most overwhelming force inhibiting muscle growth.

Although performance-enhancing drugs including testosterone and growth hormone have been so widely abused by bodybuild- ers and athletes seeking that muscular edge, even the most extreme efects of using these substances dims in comparison to the results from a myostatin reduced state. As it relates to satellite cells, myostatin is a potent negative regulator of satellite cell activation. In other words, the more myostatin you have in your body, the more quiescent your satellite cells are, therefore the fewer nuclei you have in each muscle fiber, and thus the lower your muscle growth potential will be in response to training.

My own quest as a physician and researcher specializing in human performance has been a lifelong journey to give a leg up to that kid toiling with his dad’s Healthways dumbbell. The young boy not only represents to me who I was and where I started, but also where so many others are in their journey. If I can help that kid, I can help everyone. – FLEX