As important as they are in terms of bodybuilding history, Frank Zane’s three Mr. Olympia wins (1977–79) probably don’t mean as much to the majority of people as does his unofficial title: Bodybuilder You’d Most Want to Look Like.

Fact is, Zane had, at his peak, arguably the most aesthetic, muscular physique of all time. If Dave Draper personifed the Venice Beach bodybuilding lifestyle of the ’60s and ’70s, with his big muscles and blond hair, and Arnold embodied the ultimate American dream with his overwhelming success, then Frank Zane, with his clean lines, effciency of size, and near-perfect symmetry, was the pinnacle of physical beauty—at least the masculine form of it. What follows is a glimpse into how Zane trained at the peak of his career— leading up to the 1977 Mr. Olympia—to parlay his astonishing aesthetics into bodybuilding immortality.

Frank Zane’s physique was a result of both light and heavy training. Early in his career, when leanness was his main calling card, his training consisted of light weights and high reps. This approach was effective: He looked phenomenal and won his share of bodybuilding titles, but the Mr. Olympia crown eluded him. What he lacked, Joe Weider constantly reminded him, was the muscular size that could only be achieved by training with heavy weight. Fearing injury, Zane was reluctant to go heavy (more on that in a moment).

Weider finally broke through to Zane in 1977, when he began to up his poundages in preparation for that year’s Olympia. It worked. His lifting during that time consisted of three to four exercises and three sets each for most body parts—a lower volume than what he was accustomed to. Most sets resided in the 8- to 12-rep range, the most notable exceptions being calves and abs, which continued to get high reps.

As a result, he added considerable size to his physique and won his first of three consecutive Olympia titles.

“The only way you can get muscle size is through heavy training,” he said after his victory in ’77. “I find that if you train heavy, and then you lay off for a while, you hold your size longer. Years ago my training consisted of a lot of light pumping movements, but my size quickly diminished when I stopped training.”

Unfortunately, Zane’s wariness of heavy training was eventually justifed, as his shoulders, knees, and lower back all suffered. “Use poor form in an exercise with heavy weight and your chances of injury multiply,” he said. Thus, later in his competitive days, he was forced to return to light training. “Now I carefully avoid heavy work involving the back and knees,” he said in an article in 1988.

But injury wasn’t the only reason Zane shied away from extreme loads. As his much-publicized Zenlike approach to training would suggest, he believed heavy weight wasn’t necessary if you could just direct your concentration into the muscles you’re training. “During workouts I close my mind to all else except the muscle being worked. Larry Scott [the first Mr. Olympia] once told me that the feel of the movement is the main thing in training. I cannot isolate an area using ponderous poundages as I can when moderate weights are employed…all it takes is a sustained conscious effort!”

Up Next: Zane’s Workouts

Here are two workouts Zane did to prep for the 1977 Mr. Olympia, courtesy of his book Frank Zane: Body, Mind, Spirit. 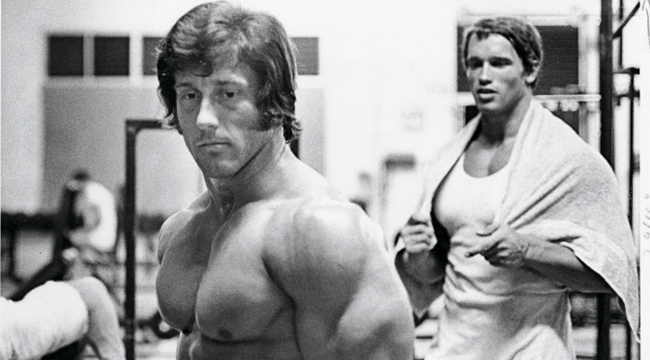 Military Monday: No Gym Required with This Do-Anywhere Workout

Bianca Belair and The Street Profits like to "pay it forward" for future generations.

The “Shuttle to Overhead” event was the story of Day 2.