Aaron Clark, one of the youngest pro bodybuilders will be competing in the 2013 New York Pro. Very brave of this young man to pick a very tough competition for his pro debut. Tells me this guy has a huge pair of cajones and is confident with Fakhri Mubarak by his side! 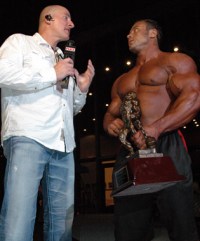 Aaron Clark is not your typical 23-year-old college student. In addition to attending school, which he say’s he is “taking the long road” on, he is also the heavyweight winner of the 2012 USA Championships making him on of the youngest professionals in the IFBB today.

A former youth baseball player, growing up Clark had no interest in working out. He said baseball was “his life and when I woke up I played baseball. When I went to sleep I played baseball,” Baseball quickly came to an end when he sustained a broken eye socket while playing. After Clark recovered, he found a new love in skate boarding.

Props to Aaron Clark and Darron Glenn for stepping on stage the next year after turning pro.