Let's discuss one of my favorite training techniques — supersetting, or doing two or more exercises back to back without resting between sets. For instance, if you wanted to do five supersets for biceps and triceps and you chose barbell curls and pressdowns, you’d do one set of curls immediately followed by one set of pressdowns and take 30 seconds of rest, then repeat that sequence until you complete five sets of each exercise. Here are a few supersetting guidelines I always liked to follow.

My preference was always to superset exercises for opposing bodyparts — chest and back, bi’s and tri’s, quads and hams. Following a pulling movement with a pushing movement or vice versa gives one bodypart a rest while the other is being worked, and the bodypart trained second has been found to be stronger than it would normally be with straight sets. For instance, if you do biceps curls followed by a triceps move, you should find that your tri’s are slightly stronger than usual. The biceps curls prime the nerves that cause the triceps to contract, producing a stronger and more powerful contraction.

Supersetting chest and back isn’t as common. Most people like to focus on these big bodyparts on separate days, but I almost always supersetted them, mainly because I so enjoyed the feeling of having my entire upper body pumped up. Since my chest and back were both very strong bodyparts for me during my career, I’d say my training methods for them worked.

PAIRING UP EXERCISES FOR ONE BODYPART:

Supersetting doesn’t mean you have to pair exercises for opposing muscles; in fact, you can superset exercises for a single bodypart. For delts, try supersetting lateral raises with overhead presses. For legs, pair a squat or leg press with a leg extension, or for chest, follow a barbell or dumbbell press with a dumbbell flye or cable crossover.

Supersets can also help you save time in the gym. By not resting between sets of each exercise, you often end up doing twice as much work (or more) in the same amount of time. And even though you rest between supersets, you’ll find you don’t need as much rest because one bodypart recovers while the other is working. You end up with a more efficient workout that’s more intense than the straight-sets routine you’re probably used to. It’s the best of both worlds! – FLEX 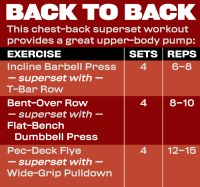