“I’VE ALWAYS BEEN INTO BODYBUILDING, ALWAYS WANTED TO COMPETE,”

says 2015 IFBB Tampa Pro champ Maxx Charles. He’s sharing details about his typical volume-heavy, three-hour leg workout and explaining the motivation behind such self-inflicted torture. Before he gets to discussing his latest training session at Bev Francis Powerhouse Gym in Syosset, NY, he explains what led him down the iron path.

“When I was 6 or 7, I was in awe of Arnold Schwarzenegger, whom I knew only from the movies. He was amazing. Then someone said, ‘You know he does this other thing—he’s not just an actor.’ And when I saw this other thing Arnold did—bodybuilding—and I saw his pictures in the magazines, that was all I wanted to do with my life. I wanted to be a bodybuilder, and I wanted to be Mr. Olympia. 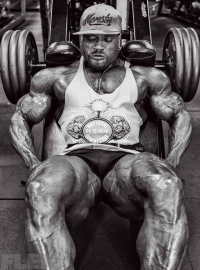 “How many people must have had similar thoughts? They see these Mr. Olympias, and it becomes their dream, the only thing that would satisfy them,” he says, laughing. “You can want to be, you can try to be, but if you don’t have the genetic potential—well, what if you don’t? What then?” Hexed genetics was not the quandary faced by Charles, born in Port-au-Prince, Haiti, who nurtured and then carried those iron dreams with him when he moved to the U.S. in the early 1990s. The hulking, 5'11" bodybuilder, who spends long days and weekends working as an IT tech in Long Island, NY, was bursting with genetic potential. What kept Charles away from the stage had nothing to do with self-doubt regarding his ability to add muscle.

“People would tell me to give competition a try, and I’d say, ‘I’m not ready. I want to be better.’ All I had to go by were the magazines I was reading. In them I’d see guys who were the best, the very best, the No. 1’s, and I didn’t look like them. I didn’t know about prepping for a contest or how they got to look like that. I loved the gym and lifting weights, but I didn’t know anything about nutrition and diet."

“Well, because they kept telling me I should try, I finally did it—not because I believed I was ready, but because they believed in me. ‘Why not?’ I decided on a contest, and two weeks before the contest I spoke to someone about nutrition. He said to eat only chicken and rice. I did that for two weeks, went into the contest, and won. That’s how I finally made the jump into competing and working toward my dream.”

After three years at the national level, Charles won the super-heavy weight and overall titles at the 2013 NPC USA. At his pro debut at the 2014 New York Pro, he finished in fifth place. Three months after that, at the Tampa Pro, Charles landed in fourth.

In his return to the New York Pro in 2015, he notched a third-place finish. Then, in his next contest, Charles finally earned his first IFBB Pro League title, winning the Tampa Pro and earning a spot in the 2015 Mr. Olympia.

"The Olympia is my ultimate goal—the goal of a lifetime,” Charles says.

“You’ve got to focus on pushing everything from the ground up. I do these two ways. For Week 1, I usually drop my body forward to put all the pressure on the quads, stop at the bottom, and push back up very slowly. This puts a lot of pressure on my knees, so for Week 2, I push my body backward to take the pressure off my knees.”

“I used to try to keep my lower back off of the pad, which pushes the glutes that tie into the lower back very hard. I stopped pushing my back forward to keep the quads under tension. I’ll usually go up to eight or nine plates.” 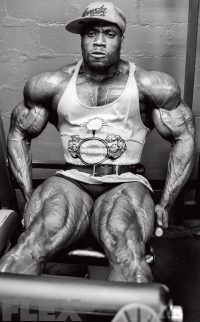 “Keep the lower back against the pad and squeeze your quads at the peak. I like to put my quads under constant tension when I do extensions.”

“This is my bread-and-butter legs exercise. I do 10 working sets with rep counts anywhere from 20 to 30 to 50. Then I do 10 dropsets and increase the reps as the weight decreases. I might do 80–100 reps on the final dropset.” 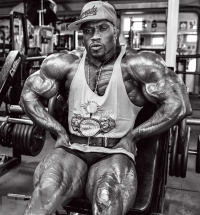 “YOU CAN WANT TO BE SOMETHING, BUT WHAT IF YOU DON’T HAVE THE GENETIC POTENTIAL? I JUST THOUGHT, ‘I CAN DO THAT.’ ” 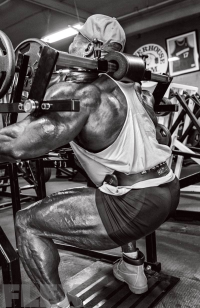 NOTES Charles is a volume monster, and his workouts can stretch to 3 1/2 hours. The rep counts cited here represent minimums that he often exceeds in the gym.

*Perform 10 working sets of 20–50 reps, followed by 10 dropsets, with the rep count increasing each set as the weight drops. Execute 80–100 reps on the last dropset. 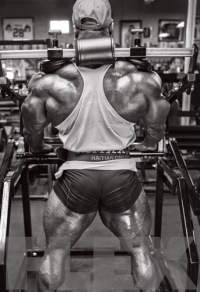