FOUAD ABIAD IS HIS OWN BIGGEST CRITIC.  You’ll never catch him resting on his laurels or grumbling about how much better he looked than the competition. On the contrary, he picks apart his poses from every angle and dissects every weakness. “I’m pretty honest about how I look. I’m not a delusional bodybuilder. I’m hard on myself,” he admits.

The Windsor, Ontario, native espouses the virtues of experience and self-awareness over the latest nutrition and training trends, with scientiﬁc bases that require evidence.

“As your bodybuilding career progresses, you have to employ some techniques based on science; but these guys who are just beginning are really overthinking things,” Abiad says. “My advice to people just starting out is to train heavy, eat every two to three hours, and see where your body goes in the ﬁrst six months. But they want a magic formula to get around hard work.”

One of his pet 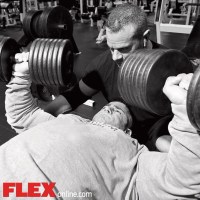 peeves is the buzz around the latest fashionable diet movement in bodybuilding, IIFYM (If It Fits Your Macros), which is based on eating a set amount of calories per day regardless of the number of meals. “These guys are telling me it’s a myth that you need to eat every two to three hours because some study told them so,” Abiad says. “There have been days where I’m not hungry and have eaten only two to three meals. I can tell you that my workout the next day suffers.”

He recites several techniques bodybuilders use that have been adopted by mainstream dieters but aren’t yet proven scientiﬁc fact: eating smaller meals several times a day, such as doing cardio on an empty stomach ﬁrst thing in the morning, eating more protein for weight loss. “Science is based on trial and error,” he says, “which is exactly what bodybuilders have done as they reﬁne their diets and training.”

In the same vein, Abiad trains by instinct. It’s a skill well honed after 15 years of lifting and competing. If he’s feeling particularly energetic, he might do giant sets. If he’s tired, he’s cautious about not pushing himself and risking injury. He listens to his body.

However, he’s quick to point out that when starting a training plan, you sometimes have to push beyond your self-imposed limits. His average chest workout takes no more than an hour, or an hour and 15 minutes if he adds triceps that day. His workouts are fast but extremely intense, with little room for socializing. Even if he trains with a partner (often fellow Canadian pro Frank McGrath or up-and-coming national competitor Dorian Hamilton), both wear headphones and get right down to business after stretching out.

Abiad and his longtime training partner Paul Lauzon have an understanding that their workout needs constant focus. “Whomever I lift with knows what we’re doing that day—we don’t need to talk a lot,” he says. Listening to music allows him to focus on the muscle contraction. He contends that the mind-to-muscle connection is particularly important for chest, which can easily devolve into more of a shoulder workout if not done properly—something he points out several times as he describes how to execute the movements.

Abiad’s workout split changes throughout the year. If he notices a lagging body part, he trains it twice a week. However, he cautions against going all out on that lagging body part two times in a week because you’ll do more harm than good. 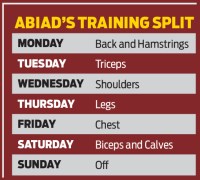 Though he doesn’t think there’s such a thing as overtraining, that body part may not recover in time for the next workout, thus defeating the purpose of the split.

Instead, he advocates doing either one heavy day and one isolation day, or one free weight day and one cable day if you’re trying to bring up a weak point. Writing down your exact plan for the month is advisable, because that way you can balance the types of exercises you do for that split and assess whether or not it worked as planned.

Abiad currently trains chest and triceps on separate days once per week. He talked me through the proper technique for some of the exercises and explained why he chose them.

One of Abiad’s go-to mass builders, this is always done ﬁrst in his chest routine. Because he goes extremely heavy, he advises doing at least two warmup sets with high reps—up to 20—to get the blood ﬂ owing into the triceps, chest, and shoulders, all of which are used in this exercise. Once warmed up, he does three sets of 8–10 reps, maintaining careful control both up and down. This is one exercise where he advises using a training partner or spotter to help you go heavy while still remaining in control of the weight.

“I see people—even pros—doing this wrong all the time. You have to sit down on the seat and not arch your back,” Abiad stresses. Although it’s a machine, the little adjustments can quickly shift it from a chest exercise to one for the shoulders. “Guys put the seat really low, slide their butt forward, arch their back, then come of the seat to press—doing all that is a really bad combination,” he says. Proper form entails keeping your back ﬂ at up against the pad, moving the seat up a little higher than you think, keeping your butt on the seat, and incorporating your abs to start pressing using only the chest.

Click NEXT PAGE to see the rest of Fouad's chest workout! >> 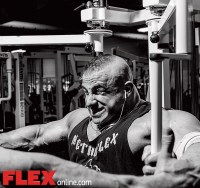 exercise for which Abiad stresses impeccable form. “The most important thing is to avoid leaning forward like you’re doing a ‘most muscular.’ Keep your back ﬂat and chest up, take a deep breath, and only move the machine using your chest,” he advises. Move the seat up or down and change the handle position to where you can go back as far as comfortable, with the chest stretched to its limit but not to where it’s straining the shoulders. Your hands need to have a medium grip—neither too high nor too low on the handles or, again, you risk working the shoulders or triceps versus the chest. The arms should be as straight as possible. On the last set or two—once he’s burnt out on perfect form—he’ll have a partner help him with cheat reps to failure, leaning forward to keep the weight moving.

Abiad has never given up this standard chest exercise, despite what’s said about it harming your shoulders—which he believes is a myth. “It’s stupid to not do these,” he says. “You can get injured on any exercise if you don’t do it right.” 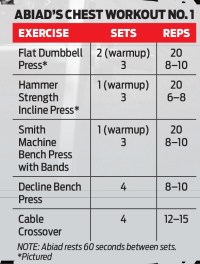 He warms up for two sets, then does descending sets of 20 down to 8, always wrapping his hand fully around the bar, never doing a thumbless grip. He never benches powerlifting-style, with the back arched and butt of the bench; and he does at least six reps with good form.

This is one of Abiad’s least favorite exercises, but one that’s put a lot of size on his arms. “I get a better feel for my triceps on this, even though I’m not a big fan of it,” he says, reiterating his principle that sometimes the best exercises for you are the ones you like the least. He also uses the Smith machine and resistance bands—a technique he deﬁnitely isn’t a fan of, but one he’s found to build mass like no other.

Click NEXT PAGE to see the rest of Fouad's chest workout! >>

Abiad varies his grip and position for this exercise. He alternates between performing the exercise on a ﬂat bench, a decline bench, an incline bench, and even standing up. Asked whether this hurts his elbows—a claim you hear from many pro bodybuilders who’ve done this for years—he says, “If I do them lying down, I make sure the bar comes down behind my head. If I bring the bar down to my nose, my elbows are strained too much.” He really likes doing them on a decline bench with a spotter handing him the bar because it puts the stress right where he wants it—solely on the triceps. 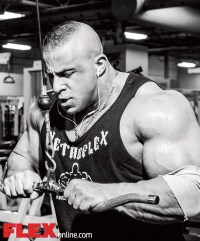 what constitutes good form on these, he admits that it depends on the person. “Jay Cutler does them with his elbows out,” he says. “I have to keep my elbows in and my nose behind the cable while I push straight down.” The one thing in common for everyone doing this exercise is the importance of keeping the shoulders back. Hunching over trying to do heavy weight will make it an exercise for shoulders, not triceps.

One of the few powerlifting techniques Abiad’s employed is the use of resistance bands on various exercises. Periodically he adds them to bench presses and close-grip bench presses on the Smith machine. 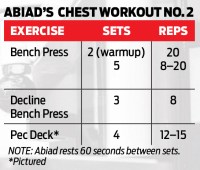 the rest of his training, good form is critical. He describes how he loops each end of the band on either side of the bar and under the bench, creating more resistance as he pushes through the exercise. Powerlifters use them to build lockout strength; as you move down there’s less resistance, but trying to hold the top of the exercise requires more strength than does just lifting the weight alone.

As a bodybuilder, Abiad uses the increased resistance to create constant tension on the muscle while pushing up. It’s virtually impossible to cheat on this and it makes even a plate or two seem heavy. “I don’t use superheavy ones,” he says. “The ones I use are almost like a rehab band, rated to about 30 pounds of resistance, which is more

Since not every gym has the proper bench setup for adding bands, the alternate way is to do bench presses on the Smith machine with bands.