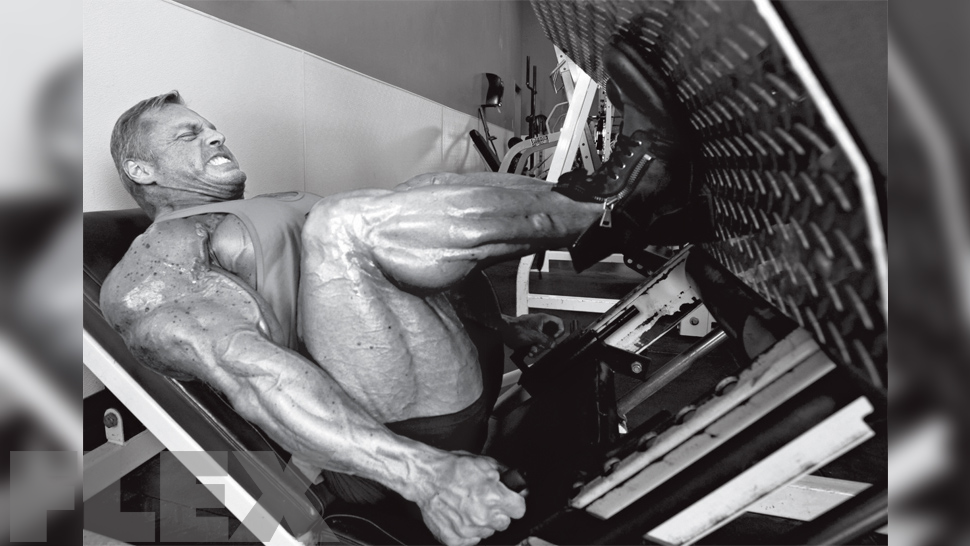 If you’ve seen the clips of Mountain Dog Training on YouTube, you might be scared out of your wits to try it yourself. After all they are a depiction of agony, showing bodybuilders like Evan Centopani, among others, struggling through torturous dropsets, partials, and forced reps, among other devious set-extending techniques. (One particular clip, ominously titled “Bulgarian Split Squat Dropset of Death,” would have most grown men crawling to the nearest exit.)

Truth be told, the training strategy devised by IFBB pro and Columbus, OH-based bodybuilding coach John Meadows six years ago isn’t for the weak. “Out of the last five guys I had down to train legs, three of them threw up,” Meadows admits.

However, he’s quick to point out another key fact. “Yes, I tend to show the videos that are more extreme, but it’s not all about crazy, high intensity on every set,” he admits. “I’d say it’s actually a program more geared to help people stay healthier and injury-free so they can keep on training and doing this thing that they love for many years.” Intensity is important, but it is a double-edged sword if not managed properly.

Recently, Meadows, who won the 2015 NPC Team Universe Championships Masters overall and is now competing in the IFBB 212 Bodybuilding division, sat down with FLEX to walk readers through a typical Mountain Dog leg regimen, sharing the secrets of his sometimes atypical, always challenging approach. If you want more mass, deeper cuts, and new levels of strength—and you’re not afraid of the hard work (and occasional queasiness) to get there—Meadows is your man.

Click "NEXT PAGE" for Mountain Dog Q&A with John Meadows >> 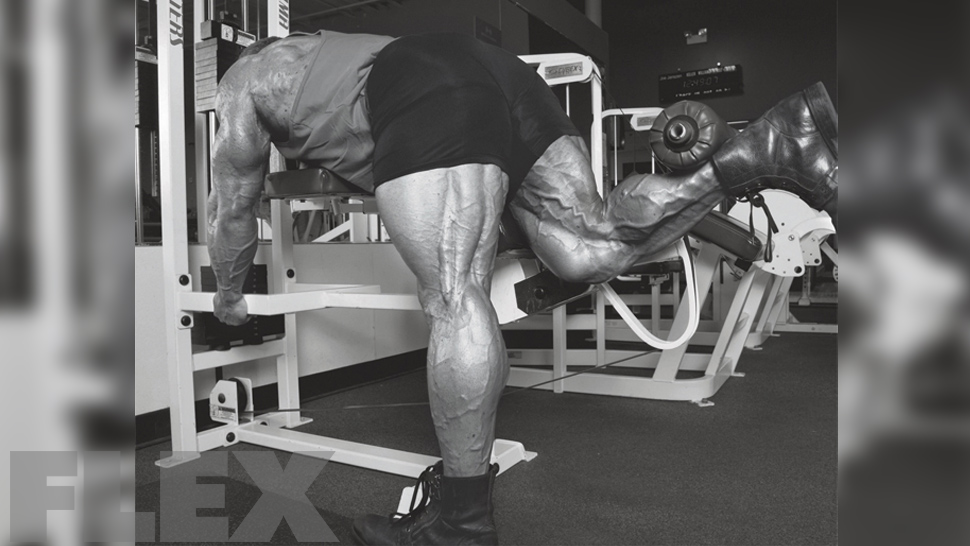 FLEX: Your leg workouts are outside the norm, starting off with the very first exercise. Why do you recommend leading with a hamstrings exercise?

MEADOWS: Years ago, I went to the gym after work, and the place was packed. I used to squat first in every leg workout—back then, it was blasphemy not to do a compound movement first—but all the racks were taken, so I figured while I’m waiting, I’d do some leg curls. I did three to four sets an then went on to squats, and it was apparent right out of the gate how much better the squat felt in my hips, knees, everything.

Why do you think that was?

When you drive a lot of blood in your hamstrings, it provides a certain stability at the bottom of your squat and leg press. Your knees and hips feel warm, too. My science buddies tell me I have discovered some post-activation potentiation of muscle force here, but I am not sure. It could just be a change in joint proprioception as well where the cushion from the pump just feels good. In Mountain Dog, we call it “greasing the groove.” It’s also good to start with hams because they are so often an afterthought. Guys will do quads hard and then toss a couple of sets of leg curls at the end of the workout and they’re done. Not surprisingly, most people don’t have good hamstrings development.

Which hamstring moves are the best to lead off?

The first exercise is always going to be a leg-curl variation—standing, seated, or lying. We save the more stretch-oriented exercises like Romanian deadlifts and lunges for later in your workouts, when the muscles are pumped.

Have you ever experimented with other leg exercises first?

Getting the adductors—the inner part of your thigh—fired up is also really good. You feel really explosive after those muscles are activated.

Where does the high-intensity work come into play?

On the leg curl, we’ll do three sets of 10, where on the 10th rep you feel you still have another rep or two in the tank. The fourth set is where we pull out all the bells and whistles: It can be a dropset, maybe some iso-holds, partials, forced reps—any high-intensity technique that jams a lot of blood in the muscles and leads to complete failure. If you’ve done it right, when you stand afterward, you can’t pick your heel up off the floor and touch your glutes with it because the hamstrings muscle is so pumped. Keep in mind, you turn it loose only on one set. You can’t do that on all four sets or you’ll wear yourself out for the rest of the workout. 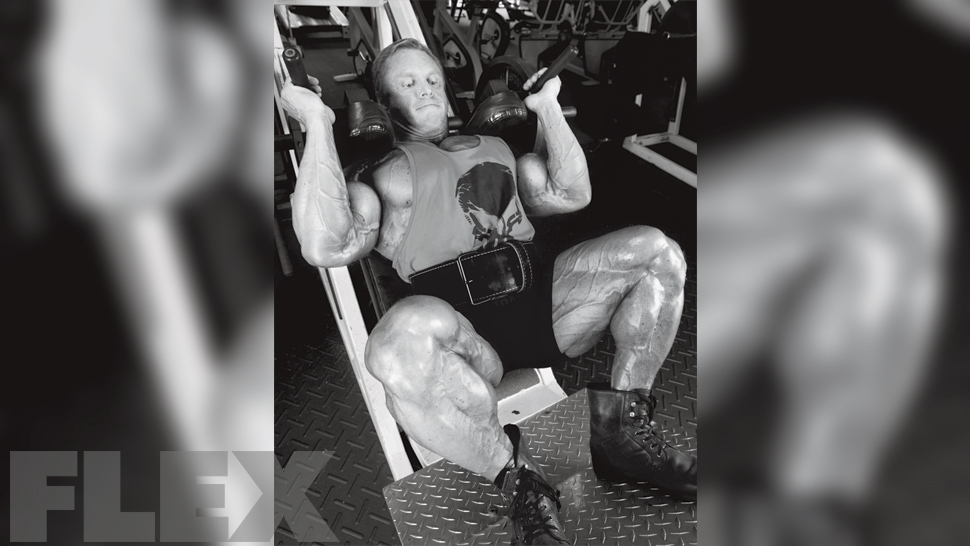 After the curl and adductor machine, do you go to a traditional compound movement?

Yes, after that, it’s always going to be a squat or leg press. Squats are my favorite exercise, but a lot of people can’t do them because of various lower-back issues. In that case, the leg press is also a really good exercise for building the thigh. It baffles me that so many people don’t think the leg press is useful. It’s such a simple movement that works so well. For this third movement, we follow a more traditional approach, pyramiding up from set to set, trying to work up to a heavier weight. If you squatted 315 for seven reps the week before, your goal may be eight this week—just classic progressive overload model in play here. For squats, our goal is usually eight reps per set, and you’re done when you can’t complete eight with perfect form, while leg press would be a 10-rep cap. Just make sure that your weight jumps aren’t too big; you want to be doing five to eight working sets so you’re getting enough volume. Also use a more explosive cadence—lower the weight in a controlled manner and then drive it up with some aggressiveness. I think there is something to altering muscle fiber type by specifically training explosively.

Do you need to consistently break your personal strength records?

Not at all. I caution people to not judge the success of a workout based on breaking a record. First of all, you can’t get stronger every workout for the rest of your life. It just doesn’t work that way. Just because you didn’t set a new PR doesn’t mean you didn’t get a great workout. You still are stimulating hypertrophy. Adding weight is a great goal, but it’s not the be–all and end–all.

What comes next, after the squat or press?

After that first compound exercise, I like to do specific pump work, focusing on the lactate threshold and the chemical reactions that happen in the muscle beyond just moving a heavy load. That could mean a hack squat, leg extension, or if you went with a barbell squat first, you could do the leg press here. We’ll do four sets, with the first three sets almost to failure, leaving a rep or two on the table, and then the last set all-out just like the leg curls.

On that high-intensity set, say you’re doing hack squats. You’ll start with 12 reps, then immediately drop the weight and do another 12. Then drop it again and do a third round of 12 reps. You can then add iso-holds. In my version of this, you’ll lower yourself down about one-third of the way on the last rep and just hold it there. In fact, if you have a spotter, that person can push down on the sled and you’re resisting that, trying to push the weight back up. The spotter needs to have a sense of that, and provide just enough resistance that it creates equal pressure—you’re pushing up hard, but the weight isn’t moving.

Do you add a second pump exercise?

Yes. the first one would include the fourth set, but the second really shouldn’t, unless you’re feeling really strong that day and want to go for it. The second exercise can be anything from a leg extension to a stationary lunge—I like to do those on a Smith machine. If you do the fourth set on those, you could do the dropsets, working your way down to body weight only. Lunges aren’t great for the beginning of a workout, but once you have that pump, like hacks, they can feel really good. 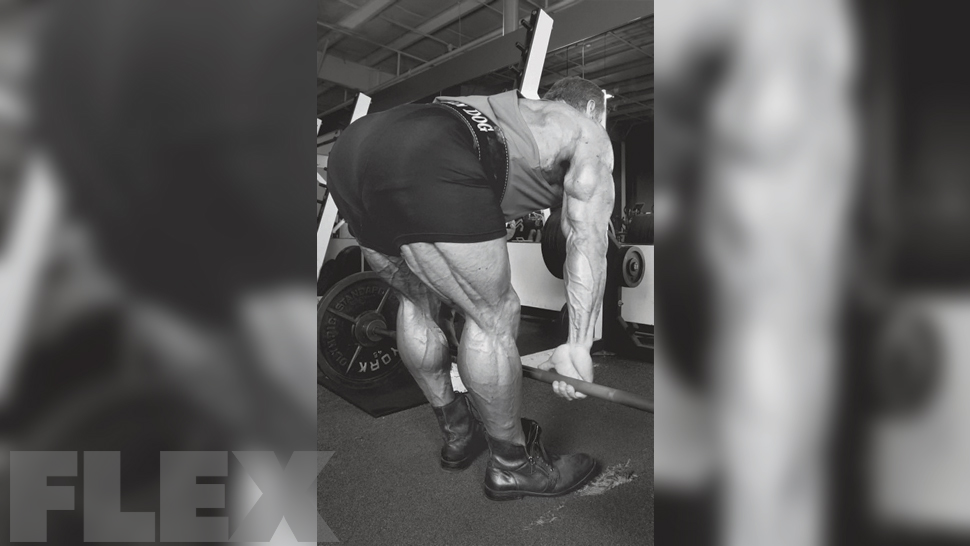 At this point, do you circle back to hamstrings?

Here we would do something that would put a stretch in them, like a stiff-leg deadlift with a barbell, dumbbells, or T-bar, for four sets of eight to 12 reps. At this point, you have all this blood in your hamstrings, then you get this nice deep stretch. I’m not going to say this type of stretch loosens up your fascia tissue or results in hyperplasia or anything like that. I think that’s debatable, but I will say I see better recovery and growth in the people I train this way. Logically this sequence works well—it’s like pressing to get a pump in your chest and then doing a flye. Here I might also add quadriceps stretches as well, just putting the foot up behind you on a bench and squatting down.

Do you pyramid the weight on stiff-leg deads?

You might need a feeder set, but you don’t need to do a lot of pyramiding, unless you’re a really strong guy who can stiff-leg 400 pounds, which I’m not. In a feeder set, you put some weight on the bar and do three reps, then add a little more and do another three reps, and then you get to your working weight. That way, you don’t fatigue yourself before you get to your working weight.

So through the whole workout, there are only one or two super-high-intensity sets. That’s fewer than people new to Mountain Dog might assume.

Exactly. If you think about it, we’ve done only two crazy sets, on the leg curl and then another on the hack squat or leg extension. We take the other movements right up to failure, but it’s with good form. I think it’s a good way to train really hard and intelligently and stay healthy. It works especially well for guys who are getting older and can’t get away with some of the things they used to do in their 20s and 30s. I get guys who are seemingly at their genetic limits, and I can squeeze another, say, 10 pounds of muscle out of them with nothing but training changes over the course of a year or two.

You tend to get a lot of pushback from people who think Mountain Dog is too high intensity.

If you look at our workout, only two sets out of the whole workout are those crazy, to-absolute-failure, high-intensity sets. The other exercises are challenging, too, but not done to the extreme. It’s a sustainable long-term training method. 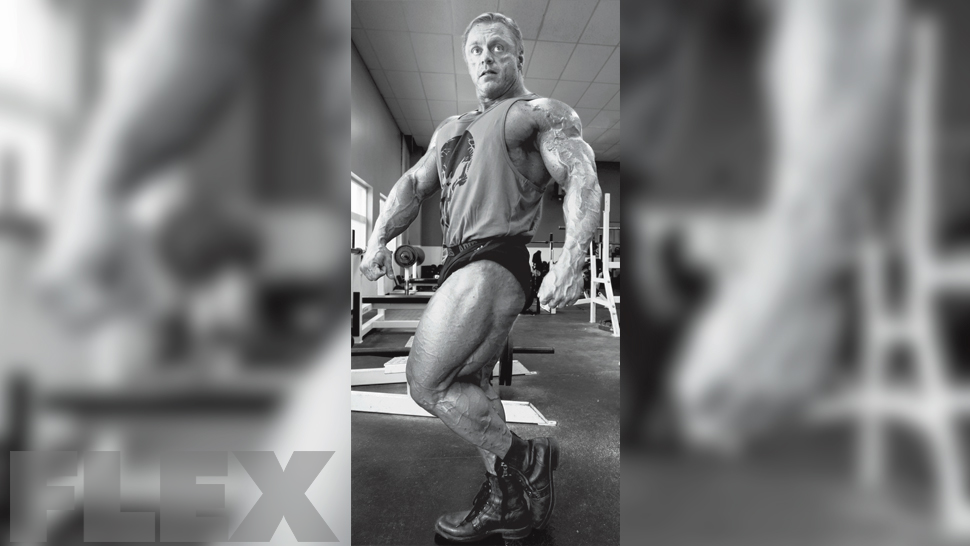 *Plus two to five warmup sets.

†The fourth set is high intensity, which usually includes a dropset, along with a secondary technique or two such as partials, iso-holds, and/or forced reps to absolute failure.