It seemed all 5,000 fans on the Felt Forum of Madison Square Garden were on the verge of rioting, so great was their disapproval of the decision. The 1984 Mr. Olympia is now best remembered for Lee Haney’s winning the first of his record eight Sandows. That announcement generated only cheers. The jeers came earlier, when 43-year-old Sergio Oliva, the three-time Mr. Olympia, was awarded eighth. The decision was just, but fans didn’t want to consider the Myth a mere mortal.

Because Oliva had a well-deserved reputation for a short fuse, FLEX’s then editor in chief, Rick Wayne, headed to the stage to urge his friend to stay calm. It had been a 12-year journey back to the O and the good graces of the IFBB for Oliva, so Wayne wanted to make certain the beloved legend didn’t blow it in a fit of rage. Wayne encountered Oliva’s wife, Arlene, who held 4-week-old Sergio Jr. She gave Wayne the baby so he could pass Junior to Senior.

“Go to the mic. Make a speech—a thank-you speech,” Wayne encouraged. The crowd was awed into silence as the colossal icon, holding his tiny namesake, approached the podium. In his heavily accented English, the Cuban-born Oliva gave a proud but gracious speech. Its most rousing moment was when he stated, “It no matter what happen tonight—eighth, 17th, or 20th—I forever be the Myth. And I hold in my arm Sergio Jr., the next Myth.” The crowd roared. Only much later would that last part sound like the anointing of bodybuilding’s next chosen one. At the time, it was merely a father acknowledging what mattered most. No one, least of all the senior Sergio, felt that infant could eventually build a physique comparable with the icon many still regard as the greatest bodybuilder of all time. Most likely, he would never again appear on a bodybuilding stage. After all, how do you follow a myth?

Here’s the text message bio of the senior Sergio’s first 25 years. Cuba, 1941: Born on Fourth of July. Worked cane fields as a youth. Fought communism when a teen. Communism won. Excelled as weightlifter. Jamaica, 1962: Cuban weightlifting team defected. Odd jobs in Miami. Chicago, 1963: Begins bodybuilding. Rapid rise. AAU Mr. America: 1964, seventh; 1965, fourth; 1966, second. Let’s pause here to address “the way things used to be.” Oliva, a black immigrant, lost the 1966 Mr. America to his training partner,Bob Gadja, a white native, this despite the fact that the former didn’t just win the most-muscular award that year, he’d also won it the previous year (when he was fourth). No nonwhite won the AAU Mr. America until 1970, its 33rd rendition. A representative article from the era acknowledged Oliva’s obvious superiority but stated that Mr. America “must be able to speak English fluently.” Before 1966 was through, Sergio bolted to the IFBB, where he promptly won the Mr. World and, minutes later, entered the Mr. Olympia. 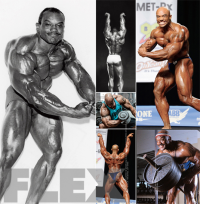 The senior Sergio dominated bodybuilding in the late ’60s. Now his son, will try to follow the Myth to the Olympia stage.

Just three years after he began bodybuilding training, Oliva was in the Olympia. One year after that, he was Mr. Olympia, the first of his three straight O victories. In the last of these, in 1969, he defeated 22-year-old phenom Arnold Schwarzenegger. Oliva was 28, and he was on top of the bodybuilding world—a sensation for his unprecedented size and proportions. That was his apex. Overconfident and underconditioned, he lost to Arnold at the 1970 Mr. World and, two weeks later, at the Olympia. The following year, he was suspended from the IFBB after competing in a rival organization.

As part of its “Nobody Remembers Who Came Second” campaign, a 2002 Visa commercial features Sergio living the very ordinary life of a Chicago policeman. Text near the end states: “Runnerup, Mr. Olympia 1972. To Arnold Schwarzenegger.” To bodybuilding fans, the ad rang hollow. Everyone remembers the Myth, and they do so foremost because of that 1972 Olympia, which remains one of the most hotly debated bodybuilding contests of all time. Both legends were at their best. With his fuller legs and arms—and his invisible 29-inch waist—many contend Sergio was the superior muscleman on that fateful day in Essen, Germany. The judges disagreed. The duel is still celebrated for what once was and what could’ve been. 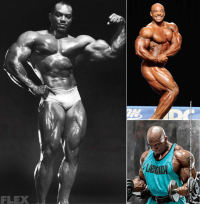 Then came the lost years, when Oliva dominated mostly scrubs in inferior organizations. This was like LeBron James forsaking the NBA to ball in Turkey. The scarcity of photos of Oliva during this time only grew the myth of the Myth. What if he had been in the Olympia in ’75 (captured in Pumping Iron) or ’76 or ’80, or really any of those dozen wilderness years? Instead, when he wasn’t patrolling Chicago streets in his specially made cop uniform, he was collecting a small check and a worthless title somewhere far away. It was only in 1984, when he was past his prime, that the Myth returned to the O.

“It was probably the best father-son thing we did in my whole life,” Junior said of a Muscle & Fitness photo shoot with his dad in 2007.

She called it self-defense, he called it an accident. When his mother shot his father five times in the summer of 1986, Sergio Oliva Jr. had yet to turn 2. The bullet retracted from his abdomen effectively ended the Myth’s bodybuilding career and his marriage. In the aftermath, Sergio Jr. and his sister, Julia, divided time between their father’s Chicago home and Alabama, where mother Arlene (a bodybuilder and personal trainer) settled. What followed is not a heartwarming tale of a sports legend driving his son to ever-higher heights. This isn’t Dell Curry and little Steph draining threes endlessly on a practice court.

Having escaped poverty and repression in Cuba, Senior wanted Junior to excel in school and be a doctor or lawyer, not a bodybuilder. That’s why he refused to let the skinny, 145-pound teenager even go to the gym with him. “He was born and raised in the greatest nation in the world, and I think he should take advantage of it,” the older Sergio said in 2007. Meanwhile, the progeny inherited not just his father’s propensity to gain muscle (he packed on 30 pounds in his first three months of training—on his own at 18) but also his antiauthoritarianism. The Sergios clashed. “Our relationship got really rough once I got serious about bodybuilding a few years ago,” Junior said in 2007. “But it’s tough to get recognition from him for anything I do. He’s not much on praise.”

Though he was only a middleweight, if you squinted at the second Sergio when he stepped onstage for the first time, in 2006, you could see some of the Mythical contours. Two years later, he was a heavyweight. Recognition came easily. Titles didn’t come at all. In Chicago, with his father in the audience, he earned a promising heavyweight fifth at the 2009 Jr. Nationals (ahead of Juan Morel) at 24. But next time, at the 2012 NPC Nationals, he landed out of the top 15. By then, the novelty of the son following in the footsteps of his fabled father had dissipated. Keyboard critics stopped focusing on structural similarities and fixated instead on all the ways the son didn’t measure up. He was branded just another also-ran who would never flex on a pro stage. What stung the most was the assertion that the only reason anyone, including sponsors, cared about him was his legendary name. “It’s a burden,” Junior says of that name, “not a blessing. No one wants to be measured against any of the Mr. Olympias, especially when you’re just an amateur. How can you live up to that?” The second Sergio jokes that he was “nuts to even try.”

For a while, it seemed he wouldn’t try. That 2012 flop was his only contest over a five-year span. But he was driven to prove the doubters wrong and make a name for himself. First, he needed to fill out his sixfoot frame to super-heavy standards. He did. And last year, after narrowly missing a class victory at the USA, he won the NPC Nationals super-heavy class and overall title (his first title) on the day after his 31st birthday. Forty-nine years after his father was denied the Mr. America, his son earned the title that supplanted the Mr. A.

His mother and sister were cheering him loudly then, but his father didn’t live to see the triumph. The original Myth, Sergio Oliva Sr., died of heart failure at 71 on Nov. 12, 2012. “I don’t know what he would’ve thought of my success,” the son said after winning the Nationals. “I don’t know that he would’ve cared at all. But I don’t think he could deny that I have a future in bodybuilding.” 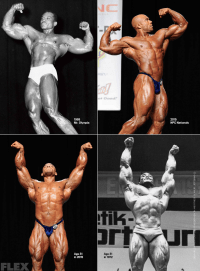 In all of bodybuilding’s long and rich history there is no pose more associated with one person than Sergio Oliva’s victory pose. It’s his. Standing tall and straight with colossal arms overhead, fists balled and turned outward, and lats flaring above his wispy waist, his upper body formed a V for victory atop a base of abundant legs. His rendition at the ’72 Olympia is our sport’s most indelible image. The victory pose is so associated with the Myth and so difficult for even the best bodybuilders to pull off that few have even attempted it. You need ludicrously full arm muscle bellies with correspondingly stupendous biceps, triceps, and forearm development, plus a striking V-taper featuring broad clavicles and lats above minuscule hips. Throw in curvaceous legs as well.

That singular combination of classical structure and modern mass, and muscles that seem too long for their bones, is what made Oliva the Myth. The Myth Jr. inherited those rare genetics, or some of them anyway. His hips and waist aren’t as svelte as Dad’s, his chest and traps aren’t as thick, and his lats are higher. But, keeping with modern standards, his legs are larger, and he’s more finely detailed. Father and son’s greatest similarity is their arms. Junior shares the same impossibly long biceps, triceps, and forearm attachments, giving his guns the same distinctive hamlike look as his father’s.

It’s this that comes across most clearly when the second Sergio strikes the victory pose, as he does in his every contest. Of course he does. It’s his family’s legacy, after all, and he’s embracing it, because he really doesn’t have a choice. No bodybuilding fan will forget his name. He acknowledges where he came from and what he’s overcome, but he’s also molding his own identity. The Myth was created on Olympia stages more than 40 years ago. The Myth Jr. was christened on an Olympia stage nearly 32 years ago. That moniker, like his birth name, has been more burden than blessing, but Sergio Oliva Jr. will carry both impossible expectations and great genetics forward as he endeavors to return to the Olympia, where it all began. – FLEX