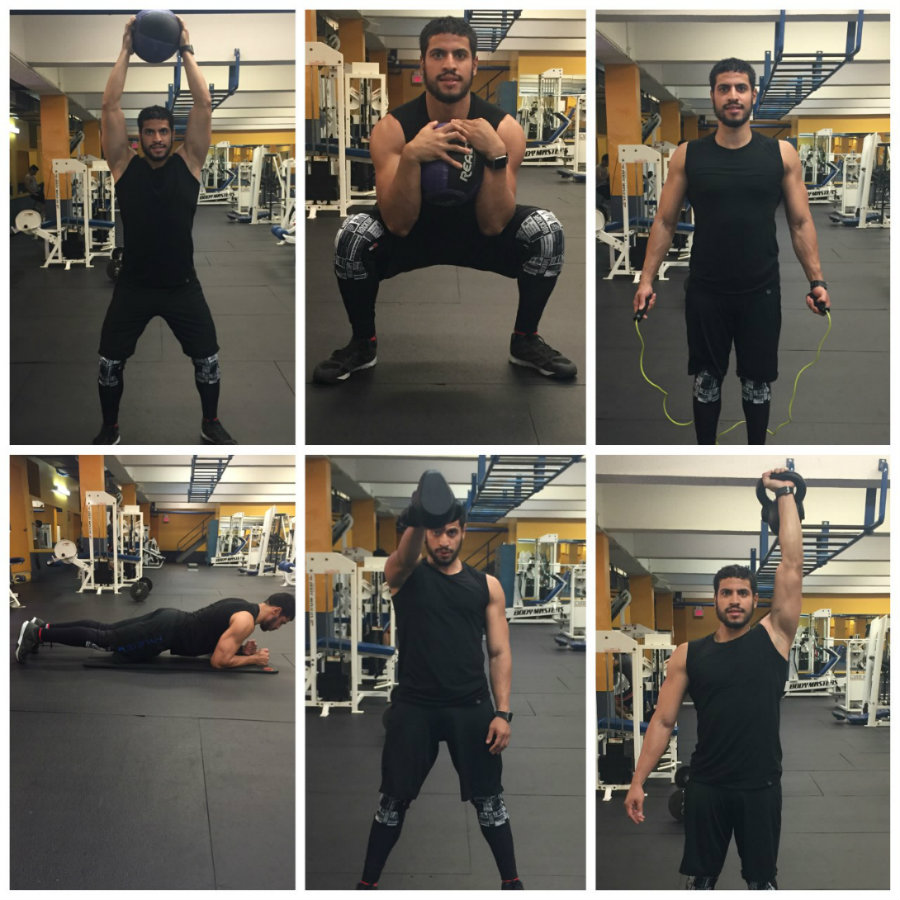 As of May 3, the Hylete C3 Charity Challenege has amassed nearly 3,000 participants and the charity organization with the most participation points is ’31 Heroes.’ As the leader in points, which represent reps completed per workout, ’31 Heroes’ will receive an additional $2,000 on top of the dollars they’ve been earning by participants doing the workouts. The fourth and final circuit of the challenge, called Mercury, has six exercises, the most of any of the circuits. Increases in metabolic conditioning and core strength were the results of this interval workout. Check out how M&F contributor Mark Barroso fared in the longest workout of the Hylete C3 Challenge.

Mercury calls for three periods of work, each seven minutes in duration, for a total of 21 minutes of work. Rest three minutes after the first two work periods. The workout, including rest, is 27 minutes. For detailed video exercise instructions, including the Cool Down routine, visit hylete.com/c3. The moves in this routine are:

Hylete C3 Charity Challenge: Circuit 4: Mercury One Arm Kettlebell Push Press: 5 reps each arm per loop. Tip: Grasp the bell tightly with your core engaged, fully extend arm up and control the motion of the bell on the way down. #hylete #hyletechallenge #muscleandfitness #madeindumbbells

My score for Mercury is 535. Since I used a 15-pound weighted ball instead of a 20-pound weighted ball for the ground to overheads and squats, those were scored as alternative movements and therefore I earned reduced points for those moves. This workout was as taxing on the heart as it was on muscles because of the combination of functional movements done for seven minutes a clip. It can serve as both a workout finisher and a “prehab” workout due to the fact that it incorporates the entire body without large amounts of weight.

Equipment-wise, I used a medicine ball instead of a wall ball, which achieves the same result, as long you don’t hunch your back over during the motions of the ground to overheads and weighted ball squats. Keep your torso upright during those movements. I used a 16kg kettlebell and this weight was just enough to provide a challenge without putting the shoulders in a compromising situation. For the KB push press, hold the bell tight with a crushing grip, brace your core, tighten your glutes, bend the knees slightly, extend the arm fully vertical, and bring the bell down to rack position under control. Doing this movement with as many muscles recruited as possible is what builds overall strength and burns more calories.

Between all four of the workouts, I performed exercises I had never tried before, increased my aerobic capacity, and genuinely had fun pushing my limits. Personally, I know this isn’t the last I’ll see of Hylete and I look forward to wearing their gear during training and obstacle races this year. I would like to thank Hylete, the National Breast Cancer Foundation and Dumbbell’s Health and Fitness in North Bergen, NJ for all of their support during the C3 Charity Challenge.

Haven’t joined the Hylete C3 Charity Challenge? Sign up now at hylete.com/c3 and complete the workouts by May 16. Also, take a look back at Barroso’s results, analysis and tips from Circuit 1: Magnesium, Circuit 2: Cadmium, and Circuit 3: Titanium.